Iron manager Stuart McCall has previewed the away clash against Barnsley and says, though it will be a challenge, it’s a test his players will be ready for. 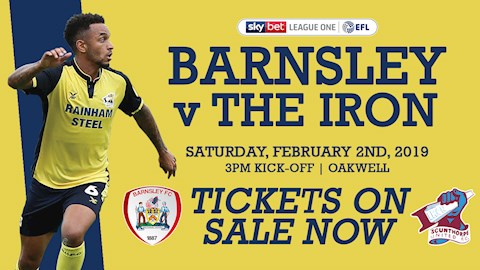 Scunthorpe enter the match having won five games out of their last six and looking to continue their climb up the League One table.

Speaking about preparations, the boss told iFollow Iron: “The weather has obviously been bad but credit to the ground staff, who managed to sort an area of the training ground for us (on Thursday), and we had a good little session out there. It’s not ideal but I’m sure every club in the country, certainly at our level, will be looking for training facilities (when the weather’s like this). I’m pleased with what we got done.

“We had a couple of knocks from Saturday and we’ve let those lads recuperate, not pushing them too hard. We’ve had a couple that we’ve left off (on Thursday) because of the surfaces but Michael (McBride, head of medical services) is confident they’ll be sound for Friday. The other boys had a good session on Tuesday and we then had the (behind-closed-doors) game out there, which saw some nice, bright performances, which was encouraging. All in all, it was a good week, which you’d expect with the run we’ve been on and things have been bubbling away quite nicely.”

Talking about the tactical test Barnsley will pose, he said: “They usually go 4-4-2 at home, though last week they changed at half-time against Rochdale and went 4-3-3, winning the game. They then started with a 4-3-3 on Tuesday night (at Oxford). It was slightly surprising for a lot of people them leaving Kieffer Moore out, but they came back from 2-0 down and got it to 2-2, and perhaps could have got a winner at the end. I’ve not come up against Barnsley since I’ve been here, but every manager you speak to says they’re the best side in the league. It will be a tough challenge but we’ll have a go and hopefully put in a strong performance.

“It’s not far down the road and hopefully we’ll take a good following. They’ve been very strong at home and it’s a challenge, but we’ll be ready for it.

“I was at their opening game of the season when they beat Oxford 4-0 and looked a really impressive side. They lost Brad Potts earlier in the window but their focus is on getting promotion. Their aim will be automatic and they’ve got a good group of players. It’s a game we’re looking forward to.”

See much more from Stuart McCall, Adam Hammill and Jak Alnwick on iFollow Iron. Click here to sign up.