“I think a draw would have been fair in terms of chances created,” said Under-23s manager Russ Wilcox, reacting to the 2-1 Central League Cup Group Stage defeat at Mansfield Town on Tuesday afternoon. 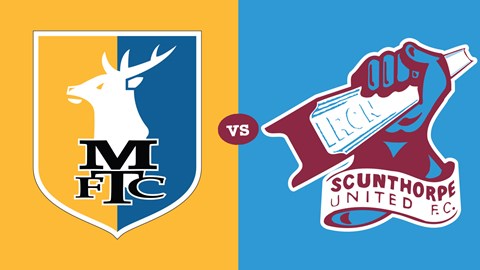 Played in blustery conditions that affected the game, the hosts went ahead in the first-half through a contentious corner, before ex-Iron Craig Davies added to the scoring early in the second period.

Andy Dales pulled one back with a well-taken goal, with United searching for a leveller late on.

Wilcox told iFollow Iron: “The elements were shocking. We had rain this morning too which meant the pitch was fairly heavy as well. The wind made it a game of two halves. We obviously defended in the first half and conceded via a dubious corner where I felt there was a foul on (goalkeeper) Adam Kelsey personally. You usually get those but we didn’t. However, we passed the ball well, moved it well and created chances.

“In the second-half we conceded an early goal and were disappointed. It was a good counter-attack goal from their point of view, but we personally have to do better defensively than that. The first pass we gave away was a poor pass that allowed the counter-attack.

“Dalesy scored an outstanding goal to get us back in, with a great little touch and how he got it in from that angle, I don’t know. It was a superb finish. We huffed and puffed towards the end and I felt personally we deserved a point. I’m pleased with the lads’ attitude.

“We kept going and the main thing from today was the application. It was horrendous out there. We had a few senior professionals playing and I know it’s difficult. I’ve been there myself where you’re not in that first team and it can be difficult to be motivated, but I felt the attitude and application was first class from them.”

Commenting on the conditions, he added: “I did some work with the back four before the game and the ball was all over the place. I told them to not fight the elements and make sure they cover each other’s back, but it was difficult to pick a pass. I felt we made some poor decisions in the second-half, playing back to front more where the ball was going out for throw-ins and goal kicks.”

The game saw Yann Songo’o play his first football since the start of November, and the midfielder got through the whole game after his recovery from a dislocated toe.

Wilcox said: “He’s done well. The plan wasn’t for him to play 90 minutes but George Hornshaw got injured and we only had one outfield substitute because of the Under-18s playing (at West Bromwich Albion) later that night. So Reon (Potts) came on and we shuffled the pack a little bit.”

Adding more about Hornshaw, the Under-23s manager continued: “George is fine. He actually got a nail in his eye and couldn’t see, with his vision becoming blurred. He’s fine now but at the time you have to make those decisions, and I felt Reon came on and did well.”

Wilcox concluded with an update on attacker Omar Sanyang, who has been out of action since August with a broken ankle and ligament injury.

He said: “Omar has got to go in for a little operation this Friday. He has a couple of wires in there from his first operation that have to be removed because he’s struggling a little bit with his mobility and flexibility on where the injury was. He will then rest for 10 days and hopefully he will then be able to start the process of getting back to fitness with his full range of movement.

“It’s one of those things that sometimes happens. He’s been back in light training but it’s not quite right at the moment so hopefully this will address it and he can kick on.”