Manager Paul Hurst reacted to iFollow Iron after the 2-0 home loss to Walsall. 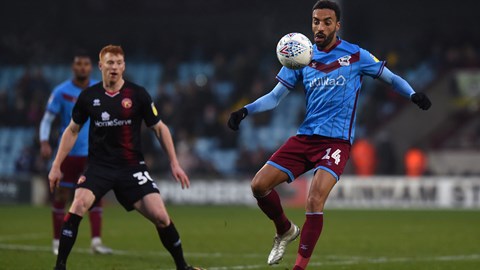 Goals in each half from Wes McDonald and Alfie Bates sealed victory for the away team in a game that Scunthorpe were on top of for large spells.

Hurst said: “I look at the standards we want and expect, and I think when we’ve had the opportunities to put the ball into the box there wasn’t enough quality in there. Credit to Walsall as they got men behind the ball and made it difficult.

“All the sides of the game that aren’t as easy on the eye, Walsall did well, and I have no qualms about the result. On quite a few days I feel we win it, but you have to take chances as they come along. Their goalkeeper also made some good saves, though mainly from shots from distance.

“We had a few players who were below the standards they have set themselves and that I believe they can be at. I expect a better reaction too when we give away cheap goals. Some of our passing was a little too slow or a yard the wrong side of people.

“We definitely played better than at Grimsby and created more chances, but at the same time there were a few things I weren’t as happy with and they show more when you lose.

“We are disappointed to lose that last home game of the year after going so long (10 games) unbeaten at home. On another day, we could have maybe won the game and everyone goes home happy so I’m not going to be too downbeat and critical, but at the same time we could have been better.

“I know they’ve lost today but we’ll have to be a lot better in our next game (at Crewe) because they can certainly play, they pass the ball and make you run. We have to be better on the ball when we get it too.”

He said: “Jake was struggling going into the Grimsby game, and managed to get through it, but we knew he’d be sore afterwards. We had it in mind that Rory (Watson) would have to come in today, and then we’ll see how Jake is ahead of Crewe.

“Then we lost Kgosi in training. He blocked a shot and felt a pop in his hamstring, and we’ll find out the extent of that, but it’s certainly not looking good.

“Yann has injured his medial knee ligament (at Grimsby Town) and will be out for six weeks. Lundy was due to come back in and has done some running here today, but has been ill since last Friday. We expected him back in on Monday but he was still ill, so that would have been too much of a risk. We’re hoping he’ll be back for Sunday.”