Midfielder James Perch is looking forward to being in contention for the first time this season when the Iron take on Championship side Derby County in round one of the Carabao Cup at the Sands Venue Stadium on Tuesday. 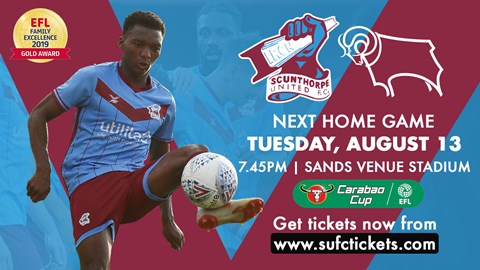 Get your tickets now for our Carabao Cup home clash against Derby County. Click here to buy!

The 33-year-old has served two matches of his three-game ban that lingered over him from the end of last season following his 15th caution. However, since the suspension is competition specific, the former Newcastle United and Nottingham Forest player comes into manager Paul Hurst’s plans for the game.

“I didn’t think I could play in the game until last week as I thought it was going to be the last game of my ban,” he said, speaking to iFollow Iron.

“I was looking forward to the Crawley game, but I’m looking forward to this game against Derby and then will look onto Cambridge next Tuesday. It’s been so frustrating. It’s a tough one and for it to drag over isn’t great. It’s a new season, so for me it should be a fresh start. Last year, I also got a few cards against me that I didn't feel were yellows.

“I’ve been training and doing what all the other lads have been doing. I played in the behind-closed-doors game against Sheffield Wednesday last week and I’ve made sure that I’ve kept myself fit and ready to go.”

While not involved in the opening two league encounters, Perch spoke about putting the opening results behind them and focusing on the next game.

“We’ve not started the season how we would have liked, but the only thing we can say is it is only two games in and there are plenty more games to play,” he continued.

“Hopefully we can get better results and better performances.

“It’s like a little bit of a free hit with Derby coming to town. Obviously we want to go and win the game and we’ll do our best to win the game. We have to draw a line under the first two results and crack on from now.”

The Iron come up against second tier opposition and one of the highest ranked teams the side could’ve faced in round one of the competition. While the hosts will be marked as underdogs, it is a positive performance that is needed, according to the midfielder.

“We need to put a performance in and try and get the right result,” he stated.

“The performance is a big thing as we’ve not reached the levels that we were expecting to show from pre-season. We did really well against Lincoln and then didn’t do it against Swindon. Performance will be key.

“They’re a good side with good players and they have a good manager in Phillip Cocu. They’re going to have a lot of quality and it will be a tough game for sure.”