“It’s a difficult place to go, but we need to make sure from that first whistle to the end that we’re right up for it,” said Iron manager Stuart McCall ahead of the trip to face AFC Wimbledon this Saturday.

United head to the Cherry Red Records Stadium on the back of last weekend’s 3-3 home draw against Rochdale, and the boss says this week has been focused on learning from the defensive lapses against Keith Hill’s side.

McCall told iFollow Iron: “We’ve got to do the basic fundamentals of defending as a team right - stop the crosses, win the first ball if we can, certainly the second, get in the right areas, communicate, organise, and we have kept going over the same bits. It’s been a case of practice, drilling, and telling them what we’re after. It’s all about communication, and when they go out they need to make sure they do that too, and don’t go into their shell. It’s about having the courage to step up a little bit.

“We had an hour-long meeting on Tuesday morning just to go through certain things. Obviously, we conceded three goals but I just think we’ve been a little bit easy to play against all season. Not only did Rochdale get three goals, but they had a couple of other really good chances. We were unfortunate with a couple of deflections but we can generally defend a lot better. We were quite strong aerially when it came to balls into the box, but it was the little second balls and when they’re playing in and around the box where we need to improve. “Likewise, we have to be better in possession going forward. We were penned in, and you will be against Rochdale when they launch balls forward to (Aaron) Wilbraham. Once it lands, we need to show more composure and courage. We brought a lot of pressure on ourselves and went too deep, which I think is a psychological thing because we hadn’t won here this season, and were then 2-0 up against Barnsley before being pegged back.

“I’m a coach who looks at how we can win games, rather than not getting beaten, so as much as we’ve been doing the defensive side of it, we’ve also been working in the attacking third as well.

“In the first-half last week, we were okay, but I think there’s much more to come from us. I want us to have far more possession and create more opportunities.”

In terms of injuries, McCall reported no fresh worries as United prepare to take on a Wombles side buoyed by a 1-0 win at Gillingham last weekend. 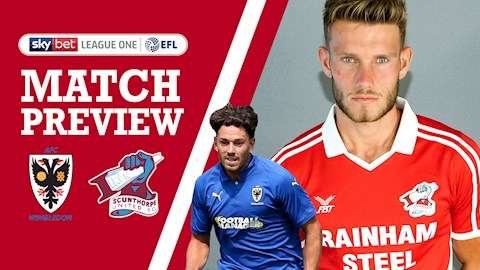 He said: “It’s similar to last week really, there were one or two boys carrying knocks in the game – Lundy (Matthew Lund) and Novs (Lee Novak) – but they’re back training now. Clarkey (Jordan Clarke) and Rory (McArdle) still remain a doubt and I think it will probably be next week now before we see them, but we’ve still got 24 hours so you never know.

“George Thomas got a couple of goals while away on international duty (with Wales Under-21s), and has come back with a spring in his step. He looked sharp in training on Thursday.

“That said, a lot of them have looked sharp in training. You can tell as a manager when there’s a sharpness and an edge to it, and it makes you feel better yourself. We’ve certainly seen that this week, which has been promising. However, you don’t win points on the training ground. We have to get down to Wimbledon, tackle, head, battle and do whatever it takes to keep a clean sheet and then have that quality going the other way.”

See much more from Stuart McCall, Ike Ugbo and James Perch on IFollow Iron. Click here to sign up.