Iron manager Stuart McCall has been encouraged by training this week, as he looks ahead to Saturday’s League One home encounter against Shrewsbury Town.

United head into the game boosted by a 3-2 away win at AFC Wimbledon last weekend and are seeking a first home victory of the campaign against John Askey’s Shrews.

McCall told IFollow Iron: “It’s been really good. Speaking to the staff, we felt Thursday’s session was as good as they’ve been, and really encouraging. The players have been picking certain things up and the intensity of training has gone up a notch, although with that there are sometimes little knocks because everyone is so keen to do well.

“Going forward, we need to get out onto the Glanford Park pitch, put on a performance and get the first home win of the season.

“Shrewsbury are unbeaten in six and, looking back at the last four games, they’re very solid and don’t give many goals away. They had so many 1-0’s last season. They have Anthony Grant, who they play in front of the back four in a 4-1-4-1. They were unfortunate in the last away game at Portsmouth, who are top of the league, to lose a last-minute penalty which made it 1-1, but their confidence is high at the minute. They had a good victory against Southend last week as well, to win 2-0.” 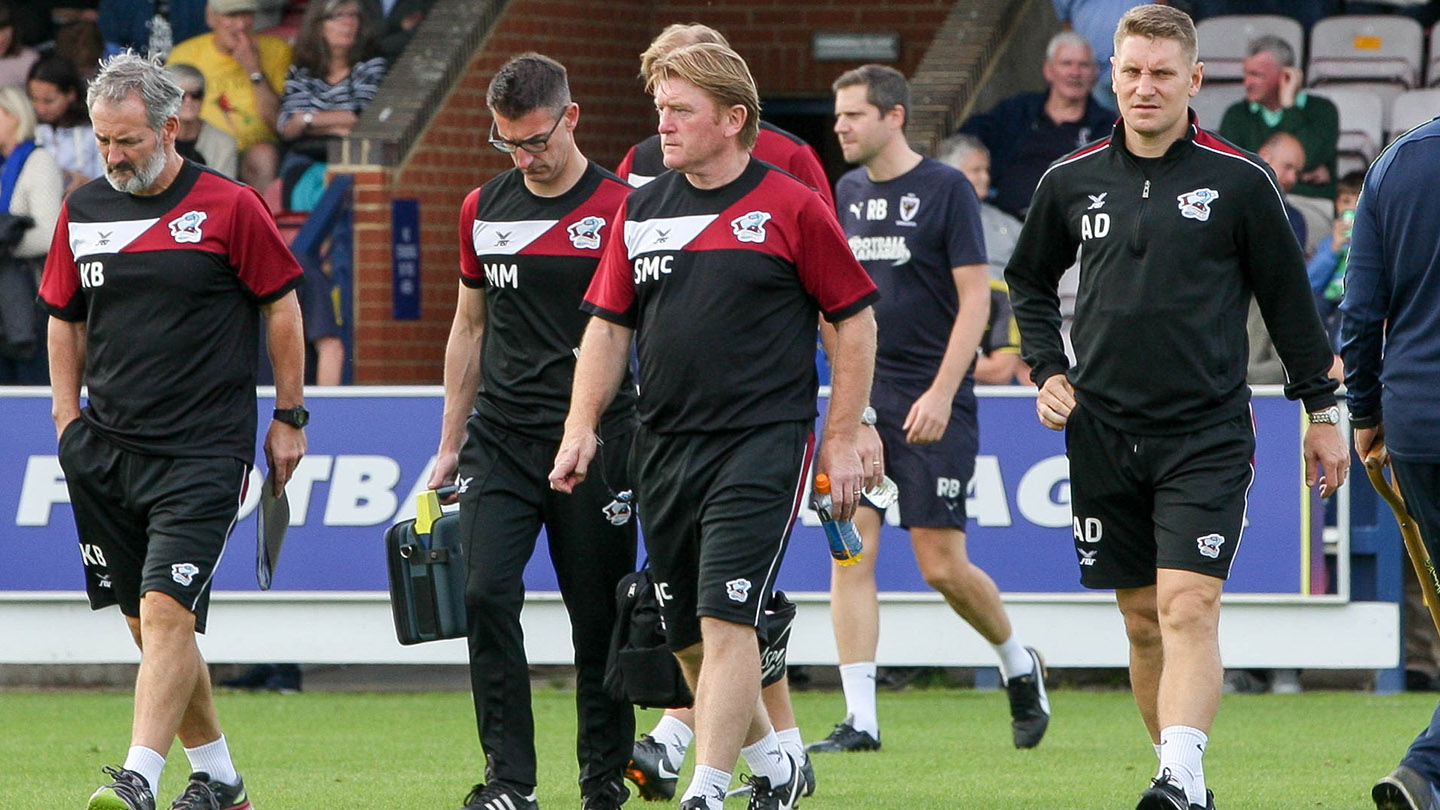 McCall continued: “I thought the Rochdale game would be really open, but this one might be slightly cagier. Not from our point of view, because we’re at home and want to get at the opposition whoever they are, but the way they play, they’re strong defensively but break quickly. They have a former player of mine in Alex Gilliead on one side and Shaun Whalley on the other, and can cause problems.

“We’ll be aware of them as always and respect them, but it’s always about what we can do, and how we can hurt them. That’s what we’ll work on over the next 24 hours.”

In terms of injuries, McCall explained Cameron Borthwick-Jackson, who came off with concussion against AFC Wimbledon last week, could have a chance of being involved but the decision will be left until the last minute.

He discussed other issues too, as he spoke about Rory McArdle and Jordan Clarke's return to training after heal and hamstring problems respectively.

He said: “The laws have changed so you’re not out for 14 days now (when a player has gone off with concussion), but have to pass a series of tests. He’s seen the club doctor at Manchester United and we’ve been liaising with them. It’s down to them ultimately. He has another set of tests tomorrow and is confident he can get through them, and wants to play. It’s 50/50, I’d say. There are no headaches, no dizziness or soreness so hopefully if he gets through these tests he’ll be okay.”

“Ryan (Colclough) came off with a bit of cramp last week, but he did take a knock earlier this week in training. He’s fine now so there’s no problem,” McCall added.

“We have good, healthy competition. Big Kyle (Wootton) has been really sharp this week, as have (George) Thomas and (Andy) Dales. (Stephen) Humphrys has had a knock so we’ll have to look at him.

“Rory (McArdle) is back in training, while Jordan (Clarke) has done all the fitness work and isn’t far away. It’s looking healthy, they’re all pushing each other and that’s what we’re after. Both have worked hard. It might be too early but we’ll see on Friday.”

See much more from Stuart McCall, Cameron Burgess and Lee Novak on iFollow Iron. Click here to sign up.