Manager Stuart McCall said the point earned during a 0-0 away draw at Burton Albion was a good one, as the Iron kept their second clean sheet in succession. 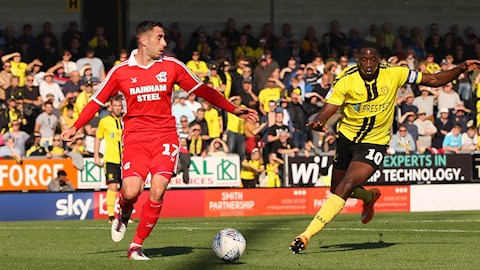 The United boss warned prior to the game that the clash at the Pirelli Stadium would be the toughest of his tenure so far, as Scunthorpe took on a Brewers side who defeated Premier League Burnley in the Carabao Cup in midweek and hotly-tipped Sunderland in their last home game.

McCall told iFollow Iron: “Burton are on a run now, certainly here, so it’s a really good point. We defended well when we needed to do.

“I’m disappointed with how we were in possession for large parts of it – we were a little bit sloppy. We created three or four decent chances and I think Burton’s best opportunities came from us giving the ball away. Jak (Alnwick) made two really good saves at the end.

“I thought Cam (Burgess) and Charlie (Goode) did well against (Liam) Boyce all game, restricting his chances. He turned, used his power and it dipped but Jak made a good save.

“For the other one, we gave it away, they broke on us, big Cam slipped and Jak pulled off an excellent save. Over the bigger picture of the whole game he didn’t have that much to do, but he made some important saves at the end.

“Overall, we know we can do better in certain areas but we were organised and restricted them to long range efforts for the large part. It’s a good point because I think they’ll certainly be top six come the end of the season.

“We’d like to do more in the final third but they’re strong defensively too, it was a case of cancelling each other out. To come here and get a clean sheet is acceptable without a doubt. We can do things better, and will do things better.”

United had two goals disallowed – firstly Matthew Lund for a foul in the build-up to his first-half effort, and then substitute Andy Dales for offside during the second period.

McCall added: “The lads weren’t happy with the first one. I thought I saw maybe a little nudge, but didn’t see enough of it.

“For the second one, Dalesy looked as though he must have been on the goal line when he put it in.”

Lund had to be substituted early in the second period after being booked early on in the game, and being at risk of a second yellow.

The boss said: “He got a yellow card, and then had a couple of fouls after so we had to take him off. He was up for the game naturally (facing his former club), he had a goal disallowed and then his header (in the second-half) was a good move and it was heading for the top corner but the goalkeeper clawed it out.

“It was a mixed day for Lundy. We wanted him to stay on for the full game but he understood why he had to come off. If he’d had made another foul, it would have probably been a second booking.”

On-loan striker Ike Ugbo also had to be withdrawn during the second period through injury.

McCall said: “He got a knock just in front of us before half-time and I think it might be the lower attachment of his hamstring. We’ll have to look at it, but obviously that makes him a doubt for Tuesday (against Charlton at Glanford Park). I don’t know how serious it is at this moment in time.”

With Charlton visiting on Tuesday and Lund definitely out after picking up his fifth league booking of the season, there will be at least one change to a starting side that hadn’t been altered for four matches previously.

“We will look at that,” added McCall. “It was hard to leave George Thomas out of the 18 today, because he’s done nothing wrong and trained well. He got a goal in the behind-closed-doors game on Tuesday but (Stephen) Humphrys is doing well, Dalesy and Ryan Colclough too.

“We’ll have a look because they’ve been playing a diamond recently to try and dominate the middle of the park, but we’ll certainly freshen it up in a couple of areas.”

See much more from Stuart McCall and Jak Alnwick on iFollow Iron. Click here to sign up.