Goalkeeper Jak Alnwick is looking forward to a potential home debut at Glanford Park this Saturday when Rochdale make the visit (kick-off 3pm).

The Rangers loanee played his first game for the Iron last weekend when they drew 1-1 at Accrington Stanley.

“I was delighted to make my debut, but I had a tough start with a bit of shaky moment at the beginning,” Alnwick told iFollow Iron. “From a team point of view, we were disappointed with the performance in the first half and also disappointed with the goal that we conceded because it was a bit scrappy.”

However, the 25-year-old made a number of good saves in that match and was pleased to be playing football again.

Alnwick said: “It was nice to make a couple of saves and good to get that feeling back of making saves in games at big moments.

“It was my first game since last season so I will be trying to build on that.” 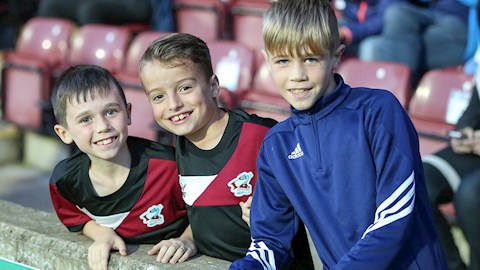 This weekend could see Alnwick make his first home outing for the club and he recalls on past visits to Glanford Park with his former side.

“I have played here before with Port Vale. It has always been a tough place to come to with a great atmosphere,” said the goalkeeper.

“I’m looking forward to it and hopefully we can get the three points for the fans and kick on for the season.”

However, Alnwick knows it will not be an easy game against Rochdale this weekend.

He said: “They are a decent side, so they will come here with the thought process that they are going to get three points, so it is down to us to play our own game.

“Looking at the quality we have got in the dressing room, if we play our game, we should get the three points.

“We are disappointed that we didn’t perform last Saturday so the lads are now raring to go for the weekend.”