“There were probably parts of that game where we’ve played as well as we have since I’ve been here,” said manager Stuart McCall following the 3-2 loss at Luton Town. 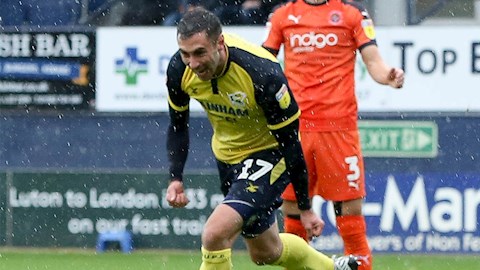 He suffered his first defeat as United boss at Kenilworth Road on Saturday, with Lee Novak equalising following an early strike from the home side.

The Hatters went back ahead and, with Scunthorpe pressing, extended their lead with minutes remaining.

Stephen Humphrys pulled a goal back in the closing stages and, despite losing, there were aspects of the performance that encouraged McCall.

He told iFollow Iron: “We’re never happy to lose obviously, in any game or anything we do, but there’s a way to lose and you have to keep going until the last minute, which we did.

“We took on a really strong side today in Luton. They’re in good form, the crowd get behind them and they have good players in their squad. However, there were a lot of positives to take out of it. We started dictating the game and when we got it back to 1-1, we were in control of it and then they hit us on the break and it was a great goal by the lad (Elliot Lee).

“In the second-half, we came out, were on top and kept pushing. They again hit us on the counter. It was like they were the away team in the second half and we were the home side, we were getting on it and then Lundy (Matthew Lund) gets a knock back to Novs (Lee Novak) to put it in, and he didn’t think it was offside, but you need things like that to go for you. 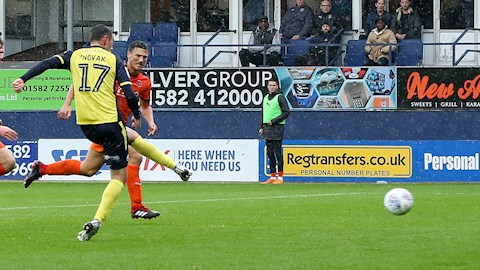 “There were a lot of good things. I’ve gone away from games, even when we’ve won, thinking there was a lot of work to do, but today I have a lot of optimism about that performance and I think it showed with the travelling support, who were terrific today, giving the players an ovation for their efforts at the end of the day.

“That’s how we have to be, because we have decent players in those areas. Again, there are things we have to do better. The defending for the first goal was terrible and we can’t keep conceding three goals. At the moment, it’s a disappointed dressing room but you can sometimes take more out of defeats. You don’t want to lose any games but there are pleasing things we can work on, and we have got a little bit of identity.”

McCall says it’s about the response now as United prepare for two home games during the next week, firstly against Lincoln City in the Checkatrade Trophy on Tuesday and then Peterborough United in the league next Saturday.

He added: “You look at the results in this league today, and there isn’t a lot in it. A number of teams were beaten at home who are expected to be up there and probably will be there. It’s a tight, tight division. There will be times you get beat, but you have to keep chipping away. If you get beat, can you win the next two? We’ll keep trying to win every game and that’s all we can do.

“They’re a good group to work with, there’s no doubt about that. They take on board what we’re wanting and there’s a good spirit about them. We haven’t got a lot of bodies at the minute but natually we’ll make changes (against Lincoln), though there won’t be the scope to do too much. We obviously want to progress in the cup but will look to next Saturday as well.”