“it’s a good three points because that was a tough game tonight,” was how Stuart McCall assessed the three points gained against Charlton Athletic on Tuesday night in a 5-3 home win. 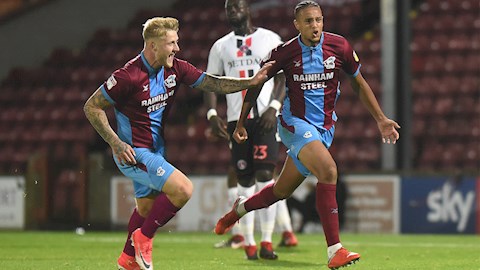 Goals from Charlie Goode, Cameron Borthwick-Jackson (2), Josh Morris and Stephen Humphrys secured the victory, as United made it eight games unbeaten in all competiions and built on the first home win of the season last time out against Shrewsbury Towm.

McCall told iFollow Iron: “We got off to a great start but we knew before the game, speaking to the staff, that we’d have a lot of defending to do. Charlton are one of the better sides, certainly at this level, going forward and they’ve shown that this season with scoring a lot of goals.

"They’re a big threat. We tried to set up in a way where we could counter that but you have to hold your hands up and say their football was very good in the first-half.

“We got the news this morning that Perchy (James Perch) and James Horsfield were out, aligned with Lundy (Matthew Lund) and Ike (Ugbo). They are four of the lads who were involved with us at Burton on Saturday and we had to come up with something. We said at half-time that we’d need a couple of more goals because it was difficult for the defenders, and all of us really because when they attack, they attack with pace and good quality. Likewise, we can score goals too.

“I watched their game against Luton from Saturday, which ended 2-2 and it could have been 4-4. I thought tonight might be similar. I thought we’d get chances with the way we were going to play. We said we’d attack with six and defend with four, because they leave two up the park and have (Tariqe) Fosu in the hole. Jordan Clarke came in and did a good job on him.

“Overall, it was thrills and spills, and end to end. I thought in the second-half we got a grip of it a bit more. In the first-half they were dominant, even though we led 3-2. We played better and passed it better in the second-half, and weren’t as sloppy in possession. If you keep the ball, and look after it, you don’t have to defend.

“There are lots of different ways to win, you can be lucky, dogged, brilliant, or can just stick at it. There are periods of time where you have to defend and periods where you have to be on top. It’s when you are on top that you need to make it count.” 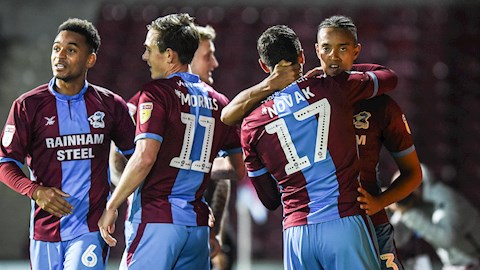 Borthwick-Jackson netted the first goals of his career in the victory, and McCall praised the impact of the Manchester United loanee.

“For the first one, he took a good touch on the edge of the box and got a little bit fortunate with the deflection – like Rochdale had here against us a few weeks ago, but it was nice to see it fly into the net,” added the boss.

“For his second, we were really pleased with him because he got into an area where we wanted him to be. He was on the front foot, which we want every play to be, and it was a fantastic finish. We played him in an advanced position with us playing three centre-halves and he reveled in that.”

The boss was also delighted to see Humphrys get on the scoresheet late on, who was set up by the substitute George Thomas.

McCall said: “I spoke to George yesterday and he’s a fantastic lad who trains really well. We just haven’t been able to get him into the side at the minute due to the form of others. His attitude was spot on and he came on and put a great ball across for Humphs to put in, whose work ethic tonight was fantastic and he deserved his goal.”

The manager provided an update on the players who missed out tonight, and also explained the late substitution of Clarke.

“Perchy’s is an ear infection so we’d like to think that will clear up in 24-to-48 hours,” said McCall. “Lundy is back from suspension on Saturday. Ike has gone back down to Chelsea to have a scan on his hamstring. It could be anything from two weeks onwards depending on the outcome, so I’m not really sure on that just yet. James Horsfield just tweaked his groin when he came on in the game on Saturday, he trained yesterday but felt limited and sore on the matchday morning. Hopefully he’ll be possibly available for Saturday. I don’t think there were any knocks tonight apart from Jordan Clarke getting cramp in the later stages of the game. He did a really good job for the team in a different position.”

Next up is a trip to Luton Town on Saturday as United, now sitting ninth, find themselves just two points away from the play-off places.

McCall concluded: “As the run continues, the momentum, the belief and the confidence builds, but we won’t get carried away. Luton won at Oxford tonight and I watched their game against Charlton on Saturday, and they were perhaps unfortunate not to win. It’s another tough one, but I’m sure teams know they’re in for a tough one when they come up against us as well.

“You’ve got to get the best out of each other and put demands on yourself. There were tough periods but as I said to big Cameron (Burgess) at the end, who made two fantastic tackles on Lyle Taylor, people stood up and were counted. You have to stick at it and keep battling away. The lads in general did that.”