“It’s just great to get back to winning football games,” was how manager Stuart McCall reacted to the Iron’s 2-1 home Emirates FA Cup win over Burton Albion. 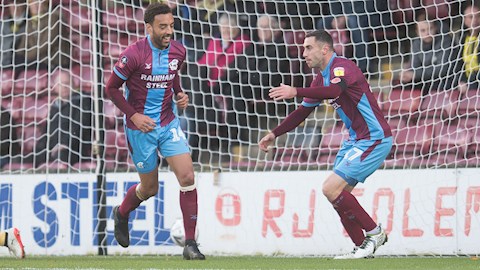 Goals from James Perch, which was his first for the club, and Lee Novak put Scunthorpe in front during the first-half.

Burton got one back with ten minutes remaining through Liam Boyce, but the Iron held on to record a victory and progress to the second round.

It was United’s first success in eight games and McCall told iFollow Iron: “It’s been a long time (since we last won). We said to the boys yesterday that by hook or by crook, however we do it, we have to find a way to win.

“I’ve seen Burton three times live this season and they, at their best, are as good as anything in this league – no doubts about that. I knew it would be a difficult game and they’ve been playing well of late.

“Everything was thrown in there today – desire, commitment, a little bit of luck, which you need sometimes, and Jak (Alnwick) pulled off two outstanding saves when we were under the cosh for long periods.

“If you look at the injury list we’ve had – even today we had CBJ (Cameron Borthwick-Jackson) missing, Charlie Goode missing, Jordan (Clarke) had to come off before half-time with his shoulder, and then George Thomas needed to come off.

“It was a gritty, hard-fought, battling victory and when you’re going through what we’ve been through recently with disappointing results it lifts everything.

"Last week helped, coming back from 3-0 down (against Oxford to draw 3-3), and if you’d been in the dressing room or on the training ground this week it’s not like a team that’s gone a while without a victory, that’s for sure.

“When the chips are down you need your characters to come to the fore and thankfully that’s the case. Today it wasn’t about silky football. It was about the desire to win a football game and thankfully we got there.

“I don’t like going long, but when you lack confidence in certain areas, it’s tough to play out from the back. Burton also set traps for you and let you go before closing down very quickly in midfield. We knew we had to play in their half today and there would be no fancy football until we got to the final third. That was how we had to do it.

“I’m definitely delighted with the win and hopefully we can keep moving forward because last week was a stepping stone and this win today helps the belief go a little bit further.” 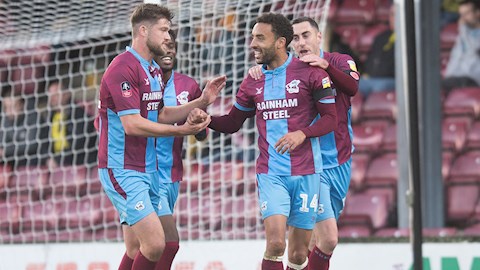 Speaking further about the Clarke injury which forced the defender off before half-time, McCall said: “It’s not good news on Jordan. I think he’ll have to go for a scan and x-ray but it’s the top of his shoulder, which might need pinning. You’re looking at six weeks plus, but we’ll have to wait and see with the results.

“George Thomas (who came off in the second-half) has rolled his ankle. He’ll meet up with Wales tomorrow (where he’s on international duty) and will be assessed there. Hopefully it won’t be too bad.

“Lundy (Matthew Lund) got a knock on his foot and he’ll be assessed in the next 24 hours.”

The boss added why Charlie Goode was absent and provided an update on Funso Ojo, who returned to the substitutes’ bench following two games out.

McCall said: “After training on Thursday, Charlie just felt a bit of tightness in his calf. He jogged on Friday morning and it just wasn’t right. He had it in pre-season and missed four days of training. I don’t think it was a major tear or anything.

“Funso will start on Tuesday night at Mansfield (in the Checkatrade Trophy) but with the injuries we have we need to be careful because we have a massive game next week at Bristol Rovers.”