The Iron will face Rochdale at Glanford Park this Saturday in Sky Bet League One (kick-off 3pm). 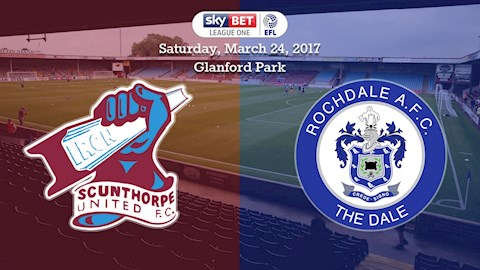 Last weekend, we lost 2-1 to Shrewsbury at home. Josh Morris put United ahead inside the opening eight minutes, however two second-half goals from Salop gave them the full three points.

Meanwhile, Rochdale last played on Tuesday night, losing 2-0 at home to Fleetwood. Ex-Iron Paddy Madden scored past Dale in that game, as they sit in 23rd position.

TEAM NEWS…
Right-back Marnick Vermijl (hamstring) has taken part in a couple of training sessions this week, as he steps up his recovery. Jordan Clarke, who has also been out with a hamstring injury, came on as a substitute in the game against Shrewsbury. He also received more game time in a behind-closed-doors game in midweek.

Striker Lee Novak (heel) will remain out. Luke Williams (scar tissue injury) is scheduled to return to training on Monday.

The experienced Ian Henderson is one to watch out for when Rochdale make the trip to Glanford Park.

This season, the 33-year-old has netted 16 goals in all competitions, taking his total tally up to 85 for Rochdale.

He joined them from Colchester in 2013 and has gone on to make over 200 appearances for the Manchester-based club.