We finish our look at the seven sides joining Sky Bet League One for the 2018-19 campaign, with Coventry City winning promotion at the first attempt in the play-off final.

The Sky Blues return to Sky Bet League One at the first time of asking after they brushed aside Exeter City in the League Two play-off final at Wembley.

Managed by former Iron boss Mark Robins, he's in his second stint in charge of the side and penned a new three-year deal recently following the success to get back into the division.

As with any side in League Two who finish below the automatic promotion places, Coventry have enjoyed some brilliant days and also some not-so-brilliant days over the course of the campaign, but finished sixth overall in the league standings. They first beat Notts County over two legs in the play-offs to set up the final with the Grecians - their opposition losing at the national stadium for the second successive year.

Ironically the campaign would begin with a demolition against the play-off semi-final opponents, winning 3-0 at the Ricoh Arena. Six points were on the board after two games before shock defeats against Newport County and Yeovil Town would follow. The Sky Blues would then win five out of six, keeping four clean sheets, including a 2-0 win over Exeter City.

Robins' team would soon go four league games without a win, but then shocked the whole league by brushing aside the runaway leaders Luton Town 3-0 at Kenilworth Road. That run would also aid their cup form which saw them surge to round five of the Emirates FA Cup, which included a third round giant-killing victory over Stoke City. The side would exit two rounds later at the hands of Brighton.

Leading up to that cup clash, Coventry came into the game on a run of three straight league defeats but four wins from six would succeed their exit from the competition, as the Sky Blues went seven unbeaten. That included an emphatic 4-0 triumph over Grimsby Town.

A play-off place was in sight, so rather surprisingly a 6-2 home defeat to Yeovil Town was a massive shock to all in attendance and from the outset. Five days later and the side would also lose to Notts County at Meadow Lane.

That defeat, though, was to be the penultimate one of the season with eight left - only Lincoln City stealing all three points off them. Despite this, they'd record five wins, including a 6-1 victory over Cheltenham Town, before beating Notts County 5-2 on aggregate and Exeter City 3-1 at Wembley to earn promotion. 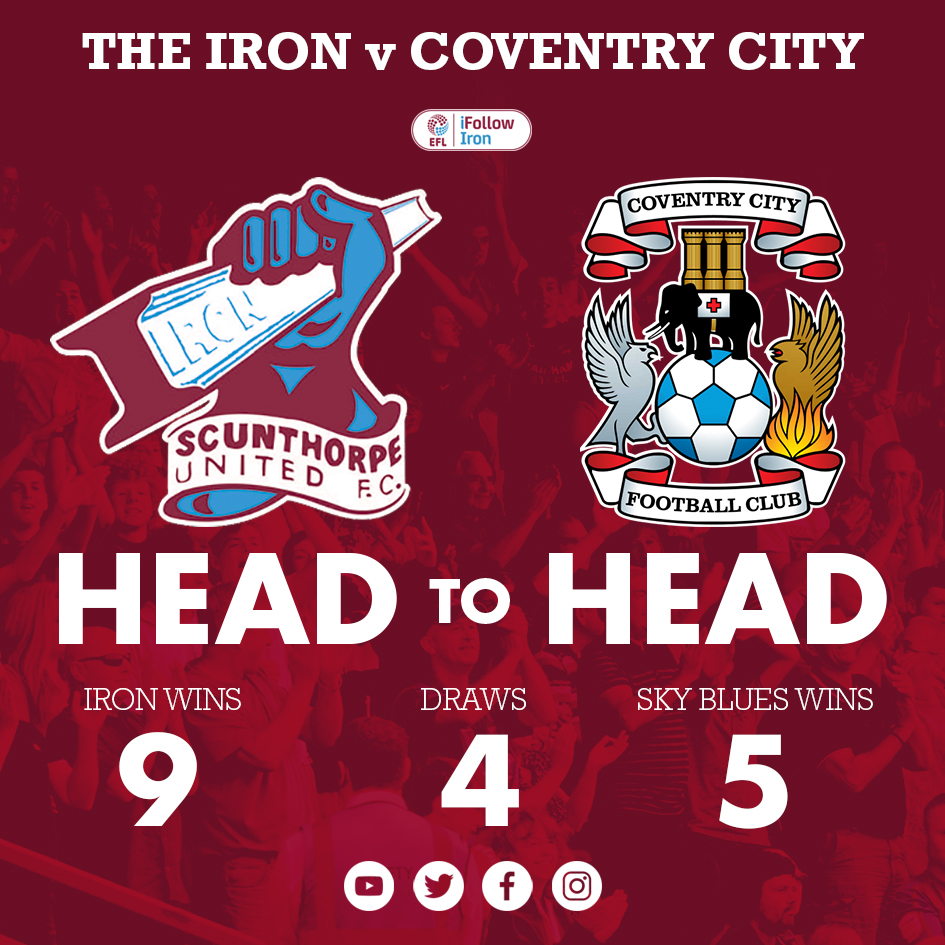 It's probably safe to say that the Sky Blues haven't enjoyed facing the Iron in recent years, having not won in the last six encounters. Five of those have been United victories, while the sixth - a 1-1 draw - only seeing Coventry snatch a point deep into stoppage time.

The five wins have turned the overall record in Scunthorpe's favour with eight wins from 14 encounters.