We continue our look at the seven sides joining Sky Bet League One for the 2018-19 campaign, moving onto the sides that were promoted from League Two. We begin by looking at the Champions; Accrington Stanley.

After looking at three sides who are back in the third tier for the wrong reason after enduring hard campaigns in 2016-17, we now look at the sides who have celebrated their arrival into the division. That can be said no more so than for Stanley, who defied the odds and expectation to be promoted to League One for the first time in their history. Even more impressive, they did so as Champions, leapfrogging the early front-runners in Luton Town and never looked back.

The new campaign would put them at home to relegated side Colchester United on the opening day and they'd show early signs of what they were going to be capable of with a 3-1 victory. Defeats against Yeovil Town and Grimsby Town were to be their only two until the start of October as John Sheridan guided his side to 23 points inside the first two months.

The side were picking up a number of good results, including in the Checkatrade Trophy, but they were knocked out of the FA Cup against Guiseley on penalties following two draws. Soon after, they'd register their latest 1-0 win over Wycombe Wanderers at the end of November.

They'd be most tested in December, with a run of five straight defeats in League Two - their worst spell of the campaign - which threatened to end their promotion ambitions had it gone on any longer. The final of those defeats, a 3-1 away defeat at Carlisle United on Boxing Day. That result was the halfway point of the campaign, with Stanley losing nine of their 23 league games. There'd be just three further defeats.

In truth, their amazing run began on the penultimate day of 2017 with a 3-0 away win at Grimsby Town. There are a number of adjectives that can be used to describe their form from then on - scintillating being the one that first springs to mind.

In short, 18 wins out of 23 and two draws saw the side take 56 points in the second half of the campaign. The side were promoted with four games to spare on April 17 with a 2-0 victory over Yeovil Town. There was no hiding the promotion party that occurred between then and their next game four days later at Wycombe Wanderers. Both sides would eventually be promoted automatically, but many thought the Chairboys would take maximum points as Stanley suffered from promotion hangover. That wasn't to be the case though as Accrington hit their opposition for four. Two of their three defeats in the second half of the season, however, would come in the last three games. 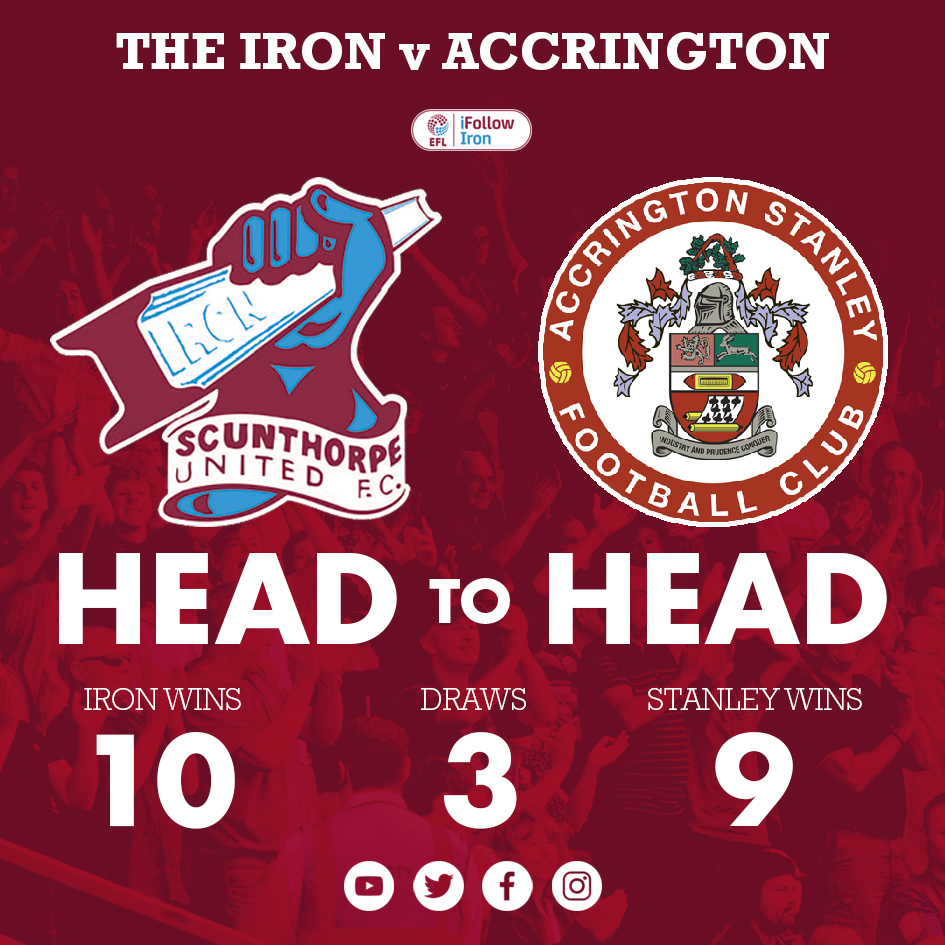 The last encounter between the two sides was a memorable Valentine's Friday night at the Crown Ground. With Stanley 2-0 up at half time, it looked as though it'd be a difficult night for the Iron, only for Sam Winnall and Hakeeb Adelakun to restore parity. David Mirfin would then nod in Gary McSheffrey's last minute free-kick to snatch all three points.

21 encounters preceded the above, with Scunthorpe winning on ten occasions in total across the 22 matches played against Accrington. The opposition have won nine of the other games, with only three draws - the last of which came in 1951.