The Iron were beaten 2-0 by top of the league Shrewsbury Town on Saturday. 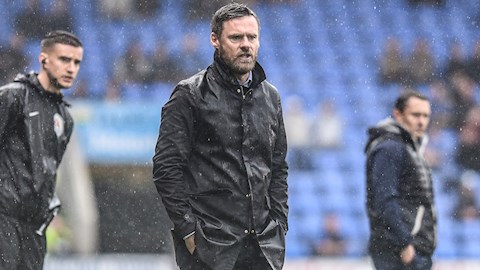 Stefan Payne bundled the ball over the line during the first half, and Carlton Morris capitalised on a loose ball in the box late on to seal the win for the Shrews.

Despite the scoreline, the Iron put on an impressive performance. It only took them two minutes to get a shot on target. Neal Bishop played a beautiful curving ball from the outside of his foot into Lee Novak. The striker saw Josh Morris’ overlap and passed the ball onto him. He had a shot with his left foot and it looked like it would sneak under Shrewsbury and England U20 ‘keeper Dean Henderson. However, he got down just in time to beat it.

Shrewsbury had a chance of their own to remind the Iron that they were here to win. Jon Nolan was found running at goal and took a shot just inside the box. However, it was wide enough to not worry Matt Gilks.

In the fifth minute, the Iron registered their second shot at goal as Rory McArdle was denied a powerful headed effort by the young Shrews ‘keeper.

There would have been shouts as to whether Shaun Whalley meant to do what he did in the 17th minute. He fired what looked like a long-range effort at the goal from the right wing, but its out-swinging nature made a case for the fact that it was probably a cross. However, it didn’t worry Gilks either way as he saw it go wide of his right post.

Despite the Iron’s dominance, the Shrews grabbed the first goal of the game from a set-piece. It came courtesy of Stefan Payne, who bundled the ball over the line following Bolton’s blocked header.

The link-up play high up the pitch was impressive and almost payed off in the 32nd minute. Sam Mantom received the ball on the edge of the box and played it through with his first touch to Duane Holmes. Unfortunately, the winger couldn’t quite get the power on it to send it past the ‘keeper.

Tom Hopper was the next to have a shot. He created the chance for himself as he wore down the defence on the edge of the box and took a long-range effort. The striker was unlucky to send it over the crossbar.

The Iron went for a spectacular finish to the first half as, with only a minute to go, Mantom received the ball 20-yards out and attempted to hit it first-time. However, he couldn’t quite keep it down. Shortly after, Holmes came close with a curling effort on the left-wing. He got it on target but Henderson was there to claim it.

Shrewsbury got the first shot of the second-half as Junior Brown ran into the left side of the box and sent a driven cross towards James Bolton. The midfielder’s first effort was deflected but the ball ended up back with him. However, he could only send it into the side netting.

The Iron had a chance of their own not long after. McArdle was the man to get his head to a Morris corner but he sent it just wide. Morris was soon standing in front of another set-piece as he took a free-kick from 30 yards out. The midfielder went for goal and it looked to be on target until a head rose up from the Shrewsbury wall to head it off its course.

The Iron gave Henderson a big test on a number of occasions. In the 60th minute, Kevin van Veen sent a long ball into the box and the goalkeeper was almost beaten to it by the Iron attack. Only three minutes later, Lewis Butroid, who was making his third league appearance, managed to get higher up the pitch and put a ball into the path of substitute, Paddy Madden. Once again though, Henderson was called upon and he tipped it over the crossbar.

Lewis Butroid was the Iron’s hero in the 68th minute. Stefan Payne looked sure to score as he was clear on goal in the box. However, the 19-year-old dove down in front of the ball to deflect it away. The pressure was then applied in the Iron’s box but it was dealt with proficiently by United’s defensive unit.

Town gave Morris another free-kick in the 70th minute but it was more central and closer this time. He stood over it just in front of the box and curled it into the top left corner. It looked to be a definite goal but Henderson leapt into the air and pushed it away with his hand.

The Iron created a spectacular attack in the 85th minute, as Morris was driving down the left wing and crossed it to Novak on the back post. The striker chose to head it back to the centre of the box where Madden was waiting. The Irishman hit it first time and came very close but it kept rising over the bar.

Carlton Morris sealed the win for Shrewsbury in the 87th minute, as he capitalised on a loose ball in the centre of the Iron’s half. The striker took on his defender, went one-on-one with the ‘keeper and sent it into the back of the net.