The Iron beat Portsmouth 2-0 in a game which saw Lee Novak score his second goal in two matches. 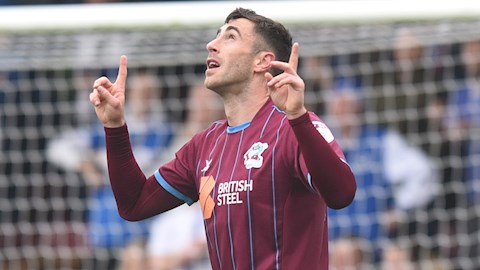 Duane Holmes also managed to get his fourth goal in all competitions this season with a volleyed effort.

The Iron made one change to the side that beat Doncaster Rovers 1-0 last weekend. Lewis Butroid came in to replace Conor Townsend.

Paddy Madden came very close with his first chance of the game. The 27-year-old received the ball on the right side of the 18-yard box courtesy of Novak. The Irishman sent a shot at goal but it went just wide of the post.

Madden and Novak were at it again in the fifth minute, as the former dinked a ball over the top of the defence for the latter in the 18-yard box. Novak received it side-on to the goal, using his chest and had a shot. It looked to be on target but it just hit the crossbar to go over.

It was in the 12th minute that their hard work paid off though. Jordan Clarke did well to beat his man and get into the box on the right flank. He passed it across the box seemingly into the path of Madden but he chose to leave it to Novak, who hit it home into the bottom right corner.

One highlight of the first half was when Jamal Lowe ran into the Iron’s box and seemed to be on target for a one-on-one situation. However, Lewis Butroid, who was making his first league appearance of the season, came in behind with a perfectly-timed challenge to dispose of the danger.

The defence seemed comfortable throughout. In the 20th minute, Stuart O’Keefe found himself some space at the edge of the box and had a shot. However, McArdle was there to stand in front of it.

The chances were flying in and Josh Morris started to break free on the left wing. He created a chance in the 24th minute as he curled a ball into the centre of the goalkeeper’s box. Funso Ojo was sliding in but the Pompey defence just about scooped it away.

In the 30th minute, Lowe managed to get his cross away into the box. It went straight to the head of Oliver Hawkins, who had leapt high to meet it. However, he couldn’t get the right connection on it to change its direction.

Only three minutes later, Holmes made it two and silenced the Blues’ attack. Butroid found his way onto the right-wing and crossed the ball into the box. However, the Pompey defence didn’t fully clear it and it fell to Holmes in the centre of the box. He hit it first time and buried it into the bottom left corner.

Pompey won a free-kick from 20 yards out with a couple of minutes left on the clock. It ended up with Hawkins at the back post, who did well to put it across to Pitman waiting at the edge of the box. However, Iron goalkeeper Matt Gilks calmly collected it.

The Iron almost made it three with less than a minute left on the clock for the opening half. Madden crossed the ball into the box with the outside of his foot. It went into the path of the sliding Novak in the centre of the box but he couldn’t quite reach it in time.

Portsmouth's Pitman opened the second half with a chance. He received the ball at the edge of the box and attempted to curl a shot into the bottom right corner. However, it went just wide.

Matty Kennedy looked lively on the right flank as, following a tricky bit of link-up play, he attempted to put the ball at the back post. The ball reached the right area but he couldn’t quite finish it. Only a few minutes later, in the 58th of the game, Hawkins leapt high into the area to challenge for a ball coming to him at the back post. He connected with it but he couldn’t keep it low enough to hit the target.

A brilliant ball switching play into Dion Donohue on the left-wing saw the full-back drive forward and be able to lay the ball off to the awaiting O’Keefe. The midfielder was at the 18-yard line and sent a driven shot at Gilks, but the ‘keeper comfortably dropped down to stop it.

The game went quiet for a while as both teams battled for possession. However, in the 74th minute Holmes revitalised the Iron’s attacking threat by shooting under pressure from 25 yards out. The effort dipped and forced a good save out of Pompey ‘keeper McGee.

Pompey applied pressure late on but it was nothing that the Iron defence couldn’t dispose of. All four of the defenders were dominant in the air and in one-on-one situations.

With eight minutes left on the clock, the visitors earned a corner. It was put to the back post where it was sent back into the middle of the box. It was the defender, Christian Burgess that attempted an acrobatic effort but he couldn’t find the target.

Later on, with three minutes to go, Gilks was forced into an instinctive save as Lowe fired a shot at his goal only a few yards away.