Manager Graham Alexander praised his ‘superb’ players after the 3-2 away win at Oldham Athletic on Saturday. 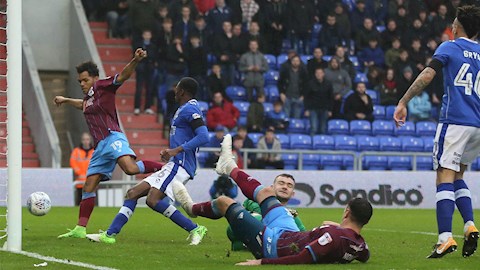 Tom Hopper and Josh Morris struck United into an early two-goal lead, but the Latics hit back through goals from Peter Clarke and Craig Davies.

Nevertheless, Scunthorpe still won all three points to move up to fifth in League One as substitute Duane Holmes notched the winner.

Alexander spoke to iFollow Iron after the game and expressed his delight with the hard-earned victory.

ON THE 3-2 WIN...
GA: We’re so pleased with the end result. I thought it was a game we deserved to win, and I thought the players showed every facet of winning a game of football today. In the first half an hour, the way we played was superb. They were really difficult conditions, but we bossed the game scored two fantastic goals. We caused them lots of problems and could have had a couple more with the play we had, but we always knew Oldham were going to come back at us at some point – you never dominate a game for a full 90 minutes – and the goal just before half-time was disappointing from our perspective because it gave them a lifeline and something to go into half-time feeling positive about, and the crowd too. In the second-half we had to withstand a bit of pressure, which was brought on us a little bit ourselves, but a little bit by the officials as well. At 2-1, we had a stonewall penalty turned down that should have been given – although it’s down to our players to take advantage of that. It wasn’t given and we were hoping it didn’t come back to haunt us. Unfortunately, it did when they got the equaliser from a set-piece – in the conditions today the set-pieces were causing havoc for both teams. The response of the players to then go on and win the game in such circumstances against a very good team is superb, and credit to the players for how they competed and dug themselves back into the ascendancy. It’s great for everyone who was here today. The supporters were superb behind the goal and it’s a happy dressing room, and I’m sure the fans travelling home are happy. The players, supporters and staff deserve it.

ON THE THREE CHANGES...
GA: We have a good squad of players, and I felt last week we possibly got it wrong by playing the exact same team – because there was fatigue and we lacked energy at times. Even though we had the week to train, I wanted to freshen things up. Even though we won the game last week, we could have played better. The lads who came into the team deserved it because they’ve trained exceptionally well and haven’t let us down when they come onto the pitch.

ON THE GOALS...
GA: We know what we get from Hops (Tom Hopper) and we encourage him to get into those goalscoring areas. He does so much work outside those areas for the team, but it’s important he’s there in the box too. Lee Novak had the first shot, the goalkeeper made a very good save and Hops was there to finish it off. For the second goal, Haks has tried a theoughball and followed it up with the second press. He won it and then played Josh in superbly, who showed fantastic composure on the finish. For the third goal, Murray Wallace won a great 50-50, and Josh lifted his head up and showed great composure to get in a brilliant cross, and Duane then finished it off. We’re delighted for Duane because he and Haks are both explosive players and they might have to share a role to get the best out of them at the moment – until we build up those fitness levels to play 90 minutes every week for 20-30 games on the bounce. They put defenders on the back-foot and both have fantastic ability to score goals and win games.

ON NEAL BISHOP COMING OFF LATE ON...
GA: He was really badly winded and struggling to breathe. We were going to bring Andrew Crofts on anyway but we had to make a different substitution. Bish was really struggling and it takes a lot for him to come off the pitch.

ON THE AWAY FOLLOWING OF 440..
GA: It’s a horrible road to come across – it took me four hours yesterday! I’m delighted for them because they’ve stuck with us through the difficult games. We were beaten at Rotherham a couple of weeks ago but the response from the fans was fantastic because they saw the players’ efforts. It’s important we stick together through thick and thin. There will be other times this season where we will be frustrated and disappointed. We have to stick together as a club to make sure we make this progression together – it’s the only way we can be successful. We’re delighted with the players and supporters, and now we’ll put it to bed and get on with the next match.