The Iron were beaten 1-0 at Walsall on Saturday afternoon. 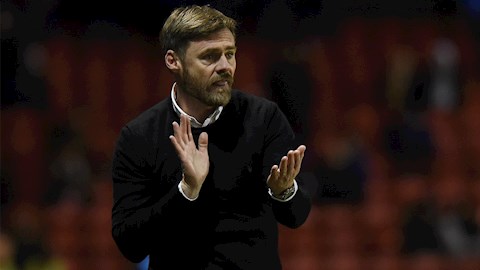 The home side got their goal inside the opening 15 minutes courtesy of a Kieron Morris effort.

Matt Gilks impressively saved an Erhun Oztumer penalty in the second half, but United couldn't get the goal despite pressing.

Manager Graham Alexander made one change from last weekend’s FA Cup match against Doncaster Rovers. Levi Sutton came into the side in place of Andrew Crofts.

In the opening seven minutes, Walsall’s Luke Leahy flashed a driven shot wide of the right post after he had found some space.

That was before the Iron tried an inventive corner-kick. Movement inside the box allowed Hakeeb Adelakun to float the set-piece to the edge of the box, but Josh Morris could not keep his volleyed effort down.

However, the home side took a 1-0 lead in the 13th minute. After the Saddlers kept the ball neatly on the left-flank, Morris received the ball and thundered a long-range effort into the back of the net. It looked as if the strike took a deflection, with Gilks rooted to his spot.

The hosts had another sighting of goal ten minutes later. Amadou Bakayoko was played through, however he dragged his shot wide of the target.

They again were looking dangerous in the 30th minute. Flo Cuvelier shifted the ball onto his left foot and curled his shot just over the crossbar from outside of the area.

As the Iron attempted to get back into the game, Adelakun tried an effort from 30-yards out. Duane Holmes had rolled the ball to him and Adelakun wrapped his foot around it, but it curled straight into Mark Gillespie’s arms.

Just before the break, Gilks made a great stop to deny Oztumer. The attacking midfielder drove forward with the ball, striking it towards the bottom right corner. However, the Iron goalkeeper parried it behind for a corner.

After the interval, it was Adelakun again who had another chance for United. Morris flicked it back to the winger, who drove a deflected shot over the bar.

At the other end, captain Rory McArdle made a super last-ditch tackle on Bakayoko, as the Walsall forward advanced on goal.

Again, Walsall looked to score from outside of the area. Oztumer took the ball forward, before he forced Gilks to make a low save to his left.

Moments later, Walsall won a penalty after McArdle fouled his man. However, Gilks was to the rescue as he guessed right and dived to his left to save Oztumer’s penalty-kick.

That penalty save sparked the Iron into life and Morris nearly found the corner of the net with a half-volley shortly after.

A good pass from substitute Kevin van Veen, allowed Murray Wallace to race onto the ball on the left side. The defender went to cross it, however his ball nearly snuck into the far corner of the net.

The Iron nearly found an equaliser in stoppage time. Clayton Lewis stung the hands of Gillespie with a powerful effort, with the ball going behind the goalkeeper, but he reacted quickly to push the ball away from the goaline.