United drew 2-2 at home to MK Dons on Saturday afternoon, after having ten men for more than half of the game. 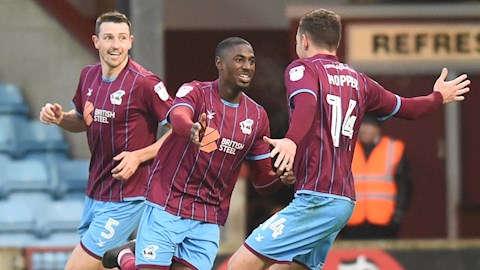 Hakeeb Adelakun opened the scoring in the first-half before Kieran Agard levelled.

The Dons then levelled midway through the second-half when Chuks Aneke scored.

The first chance of the game arrived with 12 minutes on the clock, as Osman Sow lashed a half volley from 25 yards wide of the target, with Matt Gilks comfortable that the ball was evading the goal.

A minute later, Chuks Aneke had a similar effort from range, with Gilks again comfortable as the ball was going wide.

With 19 minutes on the clock, there was a fantastic save from Gilks as Kieran Agard cued an effort across goal towards the corner. Through the bodies, the Iron 'keeper got down to his left and pushed around the post.

In the 22nd minute, Adelakun saw his long range effort sit up nicely, but his subsequent shot was blocked.

Moments later, Gilks was drawn into a further save. Sow was through, one-on-one and the Iron 'keeper spread himself and somehow saved the effort.

United took the lead on 27 minutes. The ball was played down the right, van Veen controlled well and hooked the ball into Holmes. He advanced and played the ball across the area, with Adelakun controlling before firing into the net.

Two minutes later, there was a brilliant strike from Holmes and a great save from Nicholls as his long range effort required pushing around past the bottom corner for a corner.

On 35 minutes. Gilks made a great double save. The first seemed in slow motion as he plucked Aneke's shot from the corner before he got down low to save another effort from Sow moments later.

The Dons levelled in the 42nd minute, as Agard slotted neatly into the corner of the net following a one-two.

Nevertheless, the lead was restored by United just a minute later. Holmes got himself onto his left foot and drew a save from Nicholls, but the ball fell into the path of van Veen and Hopper, with the Dutchman firing home.

That wasn’t the last incident of the first half as, in stoppage time, Bishop was given a straight red card as the referee deemed an elbow had been used on the half way line.

United made a double switch at half-time, as Conor Townsend and Andrew Crofts replaced van Veen and Holmes.

On 48 minutes, Scunthorpe won possession on halfway and surged forward with Adelakun. Into the area, the ball almost dropped for Hopper but MK Dons got the ball away.

The 57th minute saw absolutely superb work from Hopper as he got in front of Ebanks-Landell after a race to the ball. He won possession and found Morris, who dragged an effort across goal.

On 63 minutes, there was a fantastic save by Gilks after Ariyibi’s effort, with Murray Wallace also close by.

There was confusion a minute later, with the Dons awarded a penalty before the assistant referee spoke to the referee and indicated the foul was outside the box.

The Dons did level on 66 minutes though, as Aneke headed in from the resultant free kick. Gilks did his best to prevent the ball from crossing the line, but the assistant referee flagged to indicate the ball went in.

There was a great Iron chance on 69 minutes, as Adelakun dancedaround the defenders before forcing Nicholls into a great reaction save. Cameron Burgess then headed the rebound over.

On 85 minutes, there was a fantastic save from Gilks with his feet as Aneke powered an effort goalwards. Then Gilks made another superb save from Gilks as he got down low from close range to deny the Dons.

There were two more Aneke efforts - one a header and the other an acrobatic strike that went wide.

Gilks then made another great stop in the fourth minute out of five in stoppage time, diving low to his left to parry away a long range effort.