Here is our guide for supporters making the trip to Walsall this weekend. 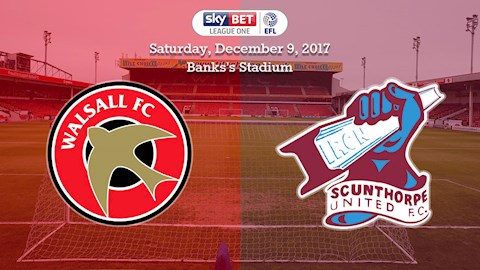 BY CAR...
Departing from Glanford Park, take the first exit at the roundabout by Tesco’s onto Doncaster Road, continue to the next roundabout, taking the first exit again onto the M181, heading towards Humber Bridge/Doncaster/M180.

After two miles, keep right at the fork, following signs for Doncaster/M180 before merging onto the M180. Continue for just over 12 miles and take the exit onto the M18 towards the M1/Doncaster.
Continue for 20 miles and merge onto the M1.

Continue for nearly 42 miles and exit at junction 23A, towards M42/Tamworth/Birmingham, keeping right to continue on the A42, following signs for Tamworth/Birmingham before taking the M6 (N) exit towards B’ham (central, E, N & W), merging onto the M6.

Keep ahead for twelve miles and exit at junction nine, taking the A461 exit to Wednesbury.

When you reach the roundabout, take the third exit onto Bescot Rd and take the slight right after around half a mile, onto Wallows Ln, following the A4148. Turn right onto Bescot Crescent after another half mile and then turn left half a mile later and the ground will be on your left.

BY TRAIN...
Visit www.nationalrail.co.uk to plan your journey. The stadium has it's own railway station which is situated behind the away end and is only a few minutes walk from the turnstiles.

PUBS AND GRUB...
You can buy a range of food inside the ground – various pies and other traditional matchday food.

There is a room for away fans with screens showing Sky Sports and the pub also serves a range of food and ales. Around 15 minutes from the ground, opposite Morrisons, is the King George V on Wallowes Lane.

The club now sell alcohol inside the ground too.

WHAT TO EXPECT...
The Banks’s Stadium is similar to Glanford Park, having opened just two years later. There is a noticeable amount of supporting pillars around the ground and one stand behind the goal towers over the others. Situated behind the goal, up to 2,000 fans can be housed. You can generate quite an atmosphere at the Banks’s Stadium and we are sure another great away following of Iron fans will do just that.