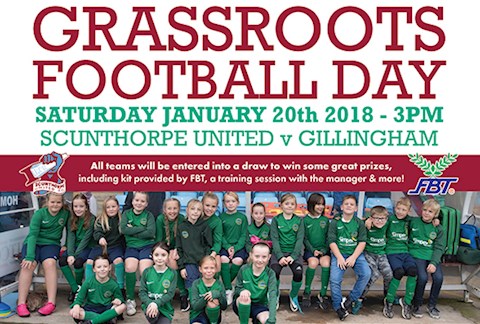 The two teams, who play in local junior leagues, along with their coaches were able to gain access to the otherwise restricted areas of the stadium.

Both groups lined up outside near the players entrance to initially get autographs and pictures before being taken inside to the home dressing room to meet the players in their own environment ahead of the game.

As well as this, the teams were able to visit the after match press room, while the junior side were also allowed access into the boot room, where they picked their favourite designs.

Further to that, the side were able to be a part of the pre-match build-up, flag bearing both sets of teams onto the pitch prior to kick-off before witnessing a match full of action, including four goals.

We now have very limited availability remaining for flag bearing in the 2017-18 campaign. If you'd like to get your local grassroots side involved, please email james.moody@scunthorpe-united.co.uk.

Following the visit, one of the team's coaches Matt Busby said: "We all had a fantastic time."