The Iron's Under-18s will be seeking a first win in three matches when they host Burton Albion this Friday afternoon (1pm kick-off) in a game which will be played on the 4G facility at Doncaster Rovers.

United come into the game off the back of a third defeat in nine games following five successive wins which had seen the side surge to the top of the Youth Alliance League. The side has since slipped to second place as Notts County reacted to their defeat against the Iron to register successive wins to go back ahead of the side.

The last game saw a 3-2 defeat to Lincoln City in a game played at Doncaster Rovers' 4G facility, due to the recent wintry weather.

The reverse fixture occured earlier this month, as Harry Lewis scored in a 3-1 away defeat to the Brewers.

Our opponents were last in action last Friday, losing 5-1 at home to Doncaster Rovers.

Scunthorpe are second in the division with 27 points from a possible 42. Notts County lead by a point more, while Burton Albion are in third place with 20 points from their 12 games.

Last week saw second year trainees Oliver Kemp, Cameron Wilson (who scored, along with Jamie Moore) and Dan Gallimore return to action. Joey Dawson has been training with the first team, while Harry Baker remains out with a knee injury.

Alex Wilkinson is still out having missed much of the season.

Two trialists were involved in the last game, along with Under-16s and Under-15s players. 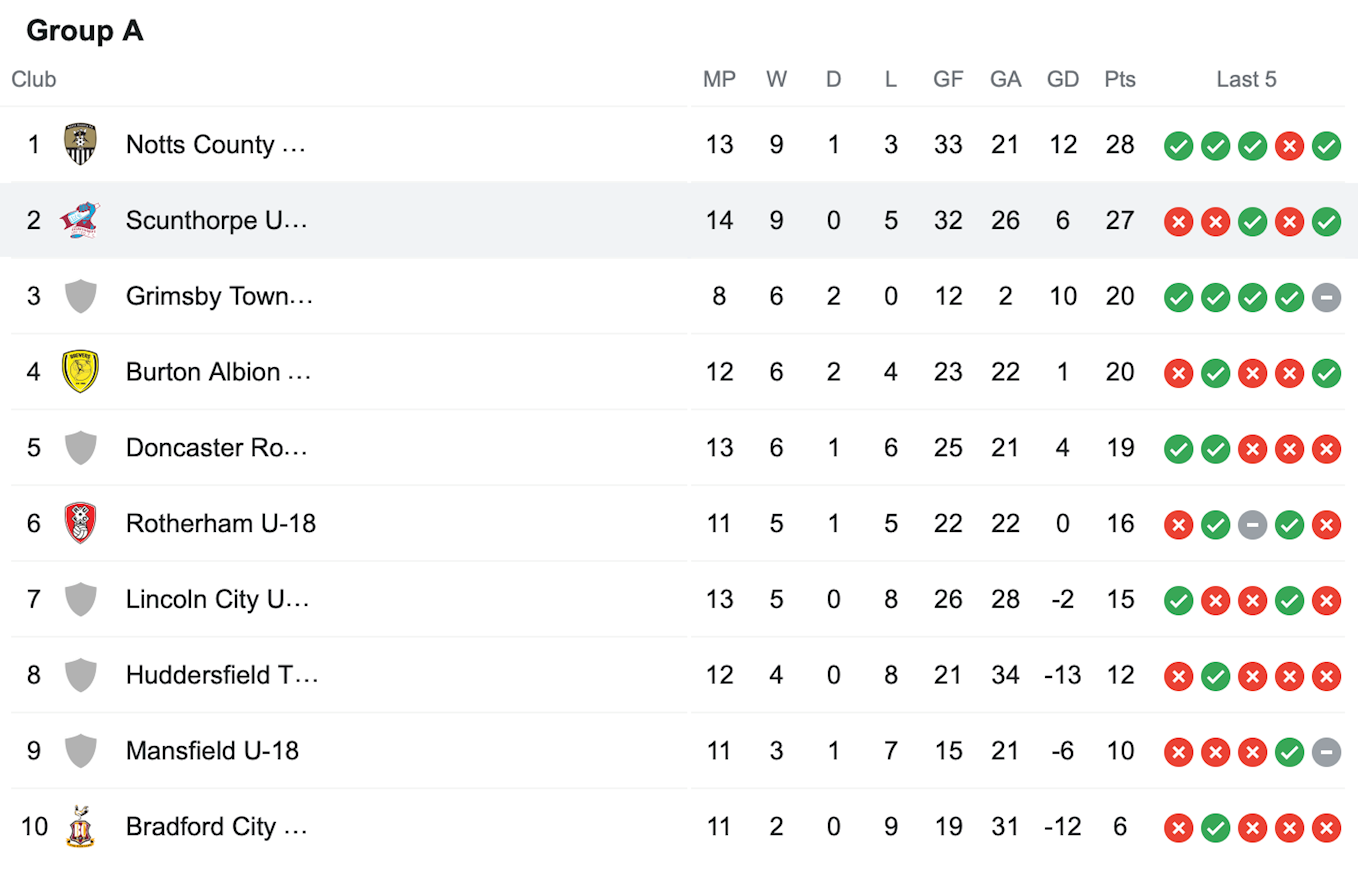 Joey Dawson and Harrison Poulter both notched braces as the Iron’s Under-18 side returned to winning ways with a comprehensive 4-1 win over Burton Albion on Friday afternoon.

The team did come from one goal down to register the victory, responding to an early Brewers strike to draw level at half-time before United’s superiority shone through to avenge for the defeat in the reverse fixture just a few weeks ago and put the Iron back on top of the Youth Alliance North East Conference, if only for tonight.

In a blustery encounter played on the 3G surface at the Keepmoat Stadium, it was the Iron who went forward first after two minutes when Harry Lewis almost profited from a misplaced back header from a Burton defender to get the ball on the left. He played in a low cross for Harvey Cribb, but the away defence did well to prevent him getting a shot on goal.

Just 60 seconds later, the first shot on target was registered and it went to the visitors as their number 11 was slipped in. He side-stepped onto his left foot and fired a low shot across goal, forcing Jake Balme into a fine save down to his left.

Balme was called into action again just two minutes later to deny Burton a certain opening goal. The visitors played their way down the left channel before a cut-back fell to a striker. Balme saved that effort, parrying the ball to his left before recovering to beat away a second effort from point blank range.

On 9 minutes, Cribb won the ball back in midfield to mount United’s latest attack as the loose ball went to Cam Wilson. He advanced on goal before slipping in Dawson on the right side of the area. His effort was thwarted on two counts, one being the goalkeeper, while the other was the offside flag.

Scunthorpe were hunting for the opening goal and came again just 60 seconds later with Patrick Virgo delicately lifting the ball over a defender before rolling the ball into the area. Dan Gallimore picked up possession but was unable to angle an effort on target.

12 minutes in, Cribb played the ball into Dawson who then used his strength to get beyond the defender, shrugging him off before angling in a shot towards the near post which the ‘keeper got a foot on to give the Iron a corner.

The Brewers were still a threat at the other end and, on 13 minutes, Balme had to be alert once more as he pushed away a powerful effort as the number 11 once again found space after latching onto a ball over the top.

Lewis had a half chance on 15 minutes as he latched onto a misplaced pass before opening out onto his left foot and firing his shot over the bar.

17 minutes in, Gallimore showed good strength to emerge with the ball on the edge of the box following two challenges. He teed up Wilson, who cut across the ball with his strike, but his low drive took a slight deflection and ended up being saved by the goalkeeper.

Two minutes later and Lewis was involved again when his cross from the left was only partially cleared as far as Wilson. He hit a left-footed half-volley from just inside the area which the ‘keeper got down well to save, along with grabbing hold of the loose ball as Dawson was primed for the rebound.

With 21 minutes on the clock, Gallimore spread play to Cribb. He then fed in Virgo who saw his cross deflected away for a corner. Lewis’ resultant corner was headed away as far as Wilson, who controlled the ball before teeing up right-back Trialist A to hit a thunderous strike which only just cleared the top right corner.

On 25 minutes, United came forward once more with Virgo as he got the ball down the left. His cross found Gallimore, who controlled before teeing up Lewis on the edge of the box. That shot was blocked before the ball was recycled to Trialist A on the right. His inviting cross looked to reach the run of Virgo, but he couldn’t connect.

Two minutes later, and largely against the run of play, the Brewers took the lead following a short corner from the left. Burton’s midfielder wearing number eight controlled the ball before angling an exquisite right-footed effort curling into the far corner of the net, leaving Balme absolutely no chance.

United were dealt a further bow just five minutes later when Virgo pulled up with an injury, with Harrison Poulter onto replace him.

Five minutes before the break, Scunthorpe go a goal which their first-half play had deserved. Balme claimed a loose ball inside his penalty area before distributing short to Oliver Lobley. He played the ball down the channel to meet the run of Lewis down the left with the winger playing the ball low across the area for Dawson, who side-footed home the equaliser.

The side almost turned the score on its head before the interval with one final chance. Dawson controlled on the edge of the box before slipping in Wilson with a last ditch tackle coming in to send the ball away for a corner. From that cross, the visiting goalkeeper scrambled towards his back post, with Oliver Kemp looking to hook the ball over his head, but the effort just cleared the crossbar.

Three minutes into the second half, substitute Poulter got involved, winning the ball back in midfield before finding Lobley just inside the left channel. He beat one player before forcing his way into the area, with his left-footed shot deflecting away for a corner.

One minute later, Burton looked to catch the Iron on the counter-attack, with a left-footed half-volley on the left side of the area clearing the crossbar.

On 52 minutes, Ethan Young received the first yellow card of the game as he battled for a loose ball in the Iron defence before hauling down a Burton player. The resultant free-kick saw a low and inviting cross come into the box, but no one from either side could connect.

Approaching the hour mark, on 57 minutes, Gallimore did well in midfield before Wilson took over possession. He slotted Lewis into the area and, despite a last ditch excellent tackle, there would have been a shot on goal.

It was just a temporary reprieve for the visitors, with the Iron capitalising from the resultant corner to take the lead. Dawson made the dummy run from the low set-piece into the area, which allowed Poulter to convert from close range.

2-1 became 3-1 on the hour mark as the Iron came forward again, playing into the wind. Lewis saw his effort brilliantly saved by the away shot stopper after being slipped into the box, but the ball spun away to Dawson who was on hand to slot home his second of the game and establish a two-goal lead.

On 62 minutes, Wilson looked for an Iron fourth as he surged half the length of the pitch with the ball, starting inside his own half. He played a one-two with Lewis down the left before shifting onto his right foot on the edge of the area, drawing the ‘keeper into a save low to his right.

With just over 20 minutes remaining, Burton went route one from a free-kick on half-way, with a centre-half winning the header, which was straight at Balme in a rare second half chance for the Brewers.

A minute later, Scunthorpe were back on the attack when Cribb played Dawson down the right. He held up play on the right side of the area before winning a corner, which was cleared.

On 75 minutes, the visiting side went through, breaking the offside trap and looking to reduce the deficit. Balme narrowed the angle, advanced on the striker and made a fine save as the ball was lifted over him, with a corner awarded. The resultant corner was headed wide.

Frustrations from the away side began to show with a couple of attempts at dissent diffused by the official before one forward did enter the referee’s notebook on 83 minutes after persistent infringement - his latest act seeing him shove the ball into Trialist A’s stomach at a throw-in.

Two minutes later, the Iron would round off the scoring as Dawson picked up a miss-kick from the visitors to be in on goal. He advanced forward at an angle and, despite being on a hat-trick, unselfishly squared to Poulter who was in acres of space. He stabbed the ball into an unguarded net.

United are next back in action on Tuesday, as they host local rivals Grimsby Town, who are the only unbeaten side in the division.