The Iron get their 2022-23 National League season underway live in front of the BT Sport cameras on Saturday when Yeovil Town visit Glanford Park (5.20pm kick-off).

Following a six week pre-season with which first team manager Keith Hill expressed how pleased he was, and eight new signings, United will be looking to get the new campaign underway with three points.

IRON TEAM NEWS
Colin Daniel and Kgosi Ntlhe have been described by Hill as 'there or thereabouts' in terms of being fit for selection after missing some recent friendlies as a precaution.

Jordan Hallam (hamstring) will definitely miss out though.

Otherwise, United will have the same pool of players to select from that played the pre-season friendlies.

THE OPPOSITION
Under the new management of Chris Hargreaves, the Glovers come into the fixture looking to build on last season's mid-table finish. They have former Iron loan left-back Jamie Reckord on their books after signing this summer, while last season's top goalscorer Tom Knowles remains.

THE OFFICIALS
The referee will be Scott Tallis, with Jack Forder and Timothy Walker as assistant referees. The fourth official is James Bancroft.

MATCHDAY DETAILS
The ticket office and club shop open from 12.30pm, with the Iron Bar opening up at 2pm along with the car parks. Time and Plaice will be providing fish and chips outside the stadium pre-match, with Sheridan's Ices selling ice cream. Additionally, local musician Mark Donaldson will be performing a live set outside the stadium from 4pm. The turnstiles are also open an hour-and-a-half before kick-off.

HEAD-TO-HEAD
We haven't met since February 2015, so here is the full record:

Our full record against Yeovil Town is as follows:

The Iron were 2-1 winners over Yeovil Town at Glanford Park on the first day of the National League season.

An Andrew Boyce header and a superb strike from Jacob Butterfield earnt United three points on the opening day.

The first game of the new season saw Yeovil Town come to Glanford Park to play in front of the BT Sport cameras. Keith Hill named six new signings in the starting line-up.

Scunthorpe immediately made their way into the Yeovil penalty area. The ball bounced up nicely to skipper Liam Feeney who took on the half volley but his shot flew over the bar and Grant Smith was not troubled.

The Iron had the first big chance of the game when they worked some space on the left-hand flank. Alfie Beestin picked up the ball and decided to cut inside on his favoured right-foot. His effort was destined for the top-right corner but Smith got across his line quickly and turned the ball behind for a corner. Colin Daniel had a free header at the back post from the resultant set-play but he couldn’t take the chance and the ball went behind for a goal kick.

The away side had their first chance minutes later. A good cross to the back post was met by full-back Jamie Reckord, who got a good connection on the strike but he saw his header blaze over the bar. Marcus Dewhurst just watched as the ball went into the Iron fans behind the goal.

A quick free-kick from Jacob Butterfield set Reagan Ogle free and he had the time and space to put a perfect cross into the Yeovil area and his cross was met by centre-back Boyce. His strong header narrowly missed the target. The Iron were centimetres away from their first goal of the season and taking the lead in the game.

The home side continued to dominate the first half; Relentless crosses into the away side’s area didn’t lead to anything as Yeovil were quick to clear their lines every time. Scunthorpe dominated the ball and pegged back the away side in their own half.

Finally, the dominance paid off when the Iron took the lead. Daniel cut the ball back to Mason O’Malley who delivered a pinpoint cross into the area from the left-flank. The cross was met by Boyce who produced a powerful header which travelled right into the bottom left corner. Smith couldn’t react quick enough and turn the ball around his right-hand post. This put the home side in the driving seat.

O’Malley created another chance for the Iron just after the goal. A trademark perfect cross met the head of winger Daniel who failed to convert the chance. The midfielder couldn’t get up in the air in time, therefore he couldn’t direct it and the ball skimmed off the top of his head and went wide of the target.

Daniel found himself with space and time at around 30-yards-out and he spotted Beestin making a good run into the penalty area. A perfectly-weighted through ball made its way to Beestin and he took the shot on first time. His powerful shot was directly at Smith and the Yeovil keeper got down well and dealt with the situation.

Town got a rare chance in the first half and a low-driven shot was taken on but it narrowly passed Dewhurst’s right-hand post and the danger was over. The opportunity should have led to a goal but the opportunity was squandered.

O’Malley caused many problems for the away side down the left-flank and another one of his deliveries was met (this time by Joe Nuttall). The Iron striker made good contact with the ball but his header went just wide of the target. It was another good opportunity to put the home side two-nil up.

Yeovil received a golden chance to equalise at the end of the half. An early cross into the Iron area caused problems and Reckord managed to reach the ball and head it goalward. Dewhurst found himself in a very advanced position and the ball nearly looped over and into his net; The Iron keeper adjusted his feet quickly and collected the ball. That action concluded the half.

The visitors got the second half underway and the first chance of the half went the way of Yeovil. A good cross into the Iron’s area by Alex Fisher almost found its way to an oncoming Yeovil player but Ogle was the one to get there first and he headed the ball out for a corner to clear the danger.

Town could have put themselves level when Charlie Wakefield found himself with time and space at around six-yards-out. He struck the ball hard and low and it looked to be heading straight into the bottom corner but it flew past the left-hand upright and their best opportunity of the game was wasted.

The momentum shifted and the Iron managed to take a two-goal lead. A driving run at the heart of the Yeovil defence by Butterfield caused problems and he found himself with time to unleash a shot from just inside the area. An unstoppable strike found its way into the top right-hand corner and the net rippled, giving the Iron a two-goal lead. Smith had no time to react as the shot was that powerful. This gave the Iron comfort and left Yeovil with all the work to do.

They responded in the 74th minute when Reckord broke forward down the left-hand flank. He found himself with time to take on a precise first time shot which ended up in the bottom corner of Dewhurst’s goal. This gave the away side a chance to get back in the game and potentially push on for the win.

Yeovil nearly grabbed an equaliser when Dewhurst came for a cross and misjudged it. The ball broke free but no Yeovil player could get on the end of it and slot the ball into an empty net. After this incident the referee Scott Tallis brought play back and called that Dewhurst was fouled in the process.

Scunthorpe had the opportunity to restore their two-goal lead when they launched a counter attack and they outnumbered the away side. New signing Marcus Carver drove down the right-hand side of the pitch and played the ball to Nuttall who was free on the edge of the area. He took the shot on but Reckord threw himself at the ball and got the block in.

Dewhurst was required minutes after this chance. A long ball into the Iron area wasn’t dealt with by the defence and it was a Yeovil head which got on the end of the cross. The ball was headed goalward and Dewhurst had to react quickly to make a smart save with his legs.

The game could have been over when deep into extra time Butterfield was set up by Feeney. The Iron midfielder had time and space and from six-yards-out he unleashed a shot which required an acrobatic save from Smith. It was an excellent save which prevented the Iron going three-one up.That action concluded the game and United had their first win of the campaign.

Tickets have gone on sale for the Iron's first game of the season, which is at home to Yeovil Town on Saturday, August 6th (5.20pm kick-off).

After taking on board supporter feedback, the Early Bird rate will be available both in person at our ticket office and online via www.sufctickets.com until three hours before kick-off of home league matches now. So for the Yeovil game, this rate will be available until 2.20pm on Saturday, August 6th. Matchday prices then apply.

CAR PARKING: East Stand car parking can also be purchased via www.sufctickets.com in advance (before 1.30pm on matchday) through the ticket system priced at £4 per car. This is a £1 advance saving as these cost £5 otherwise. 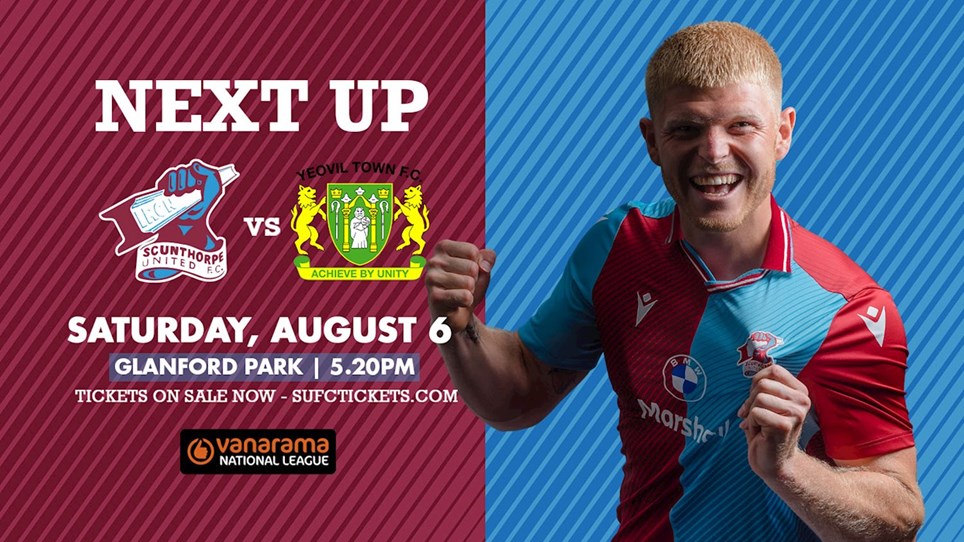 
Tickets have gone on sale for the Iron's first game of the season, which is at home to Yeovil Town on Saturday, August 6th (5.20pm kick-off).