The Iron visit Forest Green Rovers this Saturday (3pm kick-off) and you can see all the build-up articles via the links below.

HARRY LEWIS AHEAD OF FOREST GREEN
Hear from the left-back prior to the match.

FLASHBACK
We look back at previous matches against Forest Green Rovers.

REFEREE PROFILE
Read a profile of the referee, plus see who the rest of the officials are.

IFOLLOW VIDEOS
See from Keith Hill and Harry Lewis ahead of the game.

ON THIS DAY
See our past record for games played on April 2nd.

THE FOREST GREEN ROVERS VIEW
See the latest articles from their website.

The Iron made two changes going into the game, as Dan Gallimore and Alfie Beestin came in for George Taft and Sam Burns.

With five minutes gone, Liam Feeney rolled his man on the left channel after Ryan Delaney intercepted and played down the line. He was bundled over, giving the Iron a chance to get the ball into the box.

Feeney’s free-kick was headed clear. Tyrese Sinclair picked up possession and floated the ball back into the box, but home goalkeeper Luke McGee came to claim.

With eight minutes gone, Jai Rowe challenged in the air with Matty Stevens. Both stayed down with head injuries and the physios were quickly on the pitch. Rowe made contact with the ball, and was awarded the free-kick.

Soon after, Harry Lewis intercepted and drove forward. He was then held, but the hosts played the ball square for him to Hayden Hackney, who let fly with an effort from 25-yards, with the effort cannoning back into play off the post.

Then, Joe Nuttall did brilliantly to stoop in and head the ball. He was clattered after connecting with the ball by Bailey Cargill. Both stayed down and the physios were quickly back on the pitch. Both were okay to continue.

In the 16th minute, Feeney strode down the left and sent in a good cross, but the hosts got the ball clear from danger.

With 20 minutes gone, Nuttall and Beestin hunted down possession with Beestin taking the ball in his stride with a neat flick. Cribb then took the ball down the left channel and looked like he was tripped but wasn’t awarded the free-kick as he tried to stay on his feet.

Then, the Iron won the ball back again and came down the left. The ball landed with Sinclair, who brought the ball down, allowing it to bounce before the ‘keeper gathered the effort.

25 minutes in, Nicky Cadden took a resultant free-kick following a booking for Hackney, bending the ball towards Rory Watson’s right-hand post, with the Iron ‘keeper beating the ball around the post for a corner.

Straight after, Josh March got in on the right side of the area, before cannoning a ferocious effort off the bar.

Then, in the 27th minute, Ebou Adams stole into the box, but saw Watson in his way as the Iron ‘keeper made a fine save down to his right. Following that, Adams was fed the ball 25-yards from goal, quickly put it onto his left foot and struck his effort over the stand.

With 31 minutes on the clock, March was fed a low cross into the box from the left and wriggled into space before drawing Watson into another fine save, this time low down to his left.

With a 37th minute free-kick, Cadden went near post over the wall. Watson sprung across his goal and beat the ball away for a corner, which was then headed away by Nuttall.

Three minutes later, handball shouts were dismissed as the hosts saw Ryan Delaney in the way as a low cross came into the box. The Iron didn't stick around and quickly broke away following a pass from Nuttall. The ball was sent wide of goal.

In the 41st minute, Beestin held up play before nodding in Hackney. Play was then spread wide to Sinclair with the deep cross searching for Nuttall just evading his target.

There were half appeals from the crowd for a penalty a minute later as March went down, but Harry Lewis twice brushed the ball before the Iron come away with the ball.

Just before the break, Nuttall saw his goal-bound effort blocked from 18-yards before Sinclair was felled outside the box, resulting in a free-kick to the Iron, which the player sent over the crossbar.

At the start of the second period, there was a superb double save from home goalkeeper McGee as the Iron looked to capitalise on a free-kick following a foul on Hackney. Hackney drilled the ball goalwards, McGee beat away. Feeney reacted quickest, and also saw his effort parried.

Soon after, Wilson found his way into the box, but Gallimore came across to intervene, sending the ball out for a corner. Nuttall headed the corner clear.

Soon after, Jai Rowe was the latest addition to the referee’s notebook after a holding offence on the half way line.

On 55 minutes, there were gasps from the home crowd as Nuttall stepped up to take a free-kick kick, bending his effort around the wall and narrowly wide of McGee’s left-hand post.

As the clock struck an hour, March sent a first time effort wide of the target from just inside the box as the hosts built up neatly on the right side. Then, Cargill snatched at an effort from 20-yards, with the ball rolling wide of the target.

There was an Iron change in the 61st minute as Burns came on for Beestin.

Rowe and March tussled in the box on 63rd minute as a cross came into the box from the right. Both ended up on the deck and Forest Green wanted a penalty, but the referee was unmoved.

Soon after, the hosts' Dan Sweeney was twice denied by Watson - the first with a header from a corner before the second was a half-volley from point blank range.

On 69 minutes, Hackney did well to induce a heavy touch from Young as he looked to stride into the box. Watson seized the opportunity to pounce on the loose ball.

Two minutes after, Hackney won the ball in his own box and fed in Burns, who drove 60 or 70 yards towards goal before sending a shot over the bar.

Nuttall stole in on a loose ball in the 73rd minute and almost got through on goal, but Moore-Taylor did well to put his body in the way and win a free-kick.

In the 74th minute, Burns went shoulder-to-shoulder with Cargill and came out with possession, yet the referee awarded Forest Green a free-kick. It’s from the free-kick the hosts go ahead, with Dan Sweeney glancing a header into the net.

Soon after, Watson made another fine save, this time to deny substitute Jake Young after a low cross from the left was cleared. Jamille Matt then sent an effort high and wide of the target after he latched onto a pass into the area.

With ten minutes left, Nuttall capitalised on a mistake in the Forest Green backline to take the ball on the edge of the box, sending a half-volley just wide of the target.

There was a double Scunthorpe change in the 82nd minute as Hackney and Feeney were replaced by Harry Bunn and Jack Moore-Billam for his league debut.

Soon after coming on, Moore-Billam recycled possession, with Sinclair hanging a ball up for Delaney who flicked on, but McGee was out to take the ball.

There were two minutes of added time, but the Iron couldn't get the leveller.

United return to league action with a home game against Mansfield Town next Saturday (3pm kick-off).

Tickets are on sale ahead of the Iron's trip to face Forest Green Rovers on Saturday, April 2nd (3pm kick-off).

We have been handed an initial allocation of 280 tickets for the game at the New Lawn. Away supporters have been allocated the West Terrace, which is a stand that has three sections:

The West Terrace is exposed, and it is important that all away supporters bring appropriate clothing.

Should they not sell out, match tickets will remain on sale from the Iron ticket office until 3.30pm on Friday, April 1st.

The Iron have been allocated two 2 x Wheelchair spaces (+ 1 carer per wheelchair space). Please note that these are in the main East Stand and thus won’t be located with their fellow supporters. The wheelchair space is charged at the appropriate category, and the carer is provided FOC. These tickets will need to be purchased from Forest Green Rovers directly by calling 0333 123 1889, between 9am-3pm Monday, Tuesday. Thursday and Friday.

Parking is limited, but there is a car park at the primary school next door (£5 on the gate, card only). 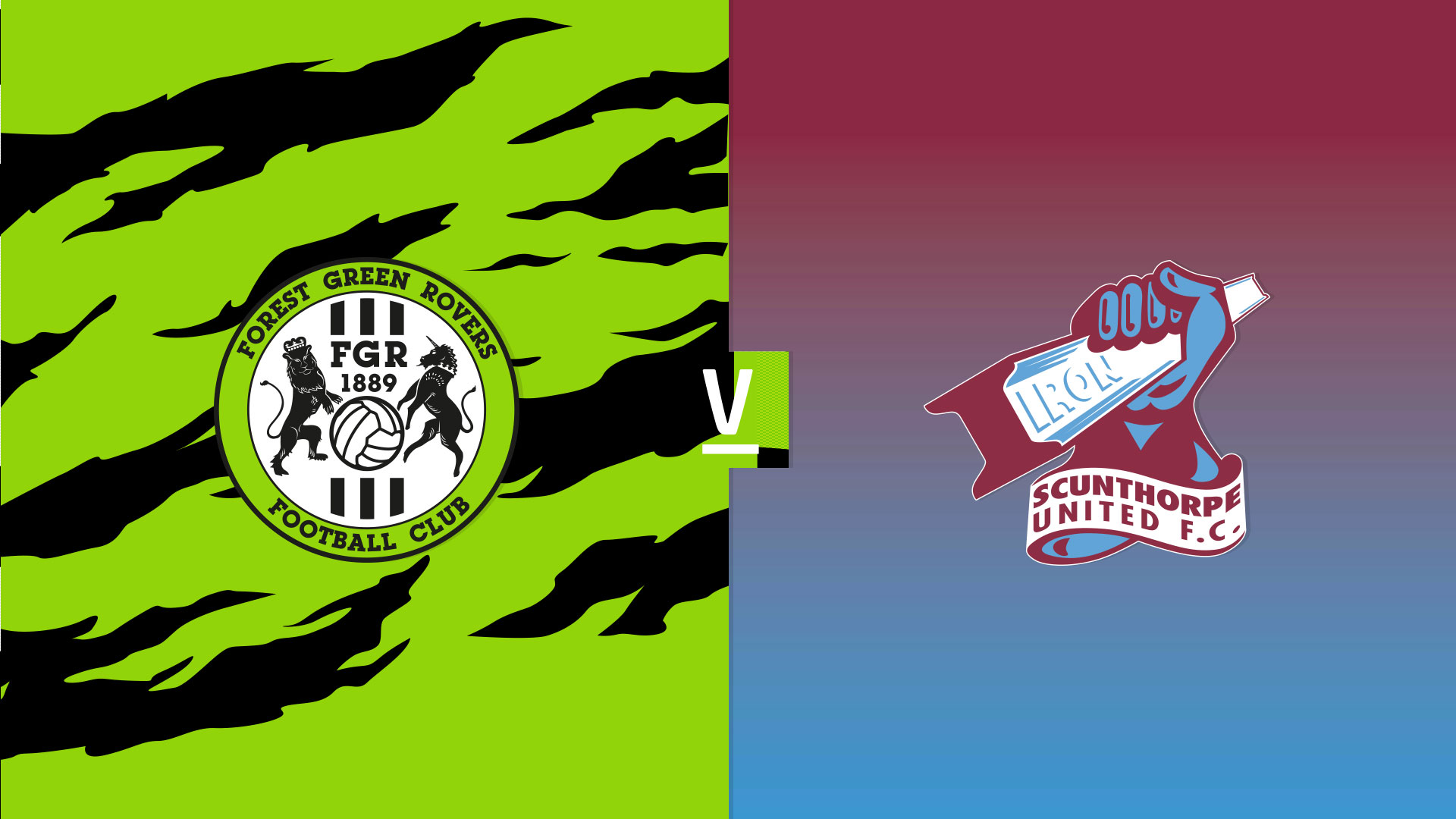 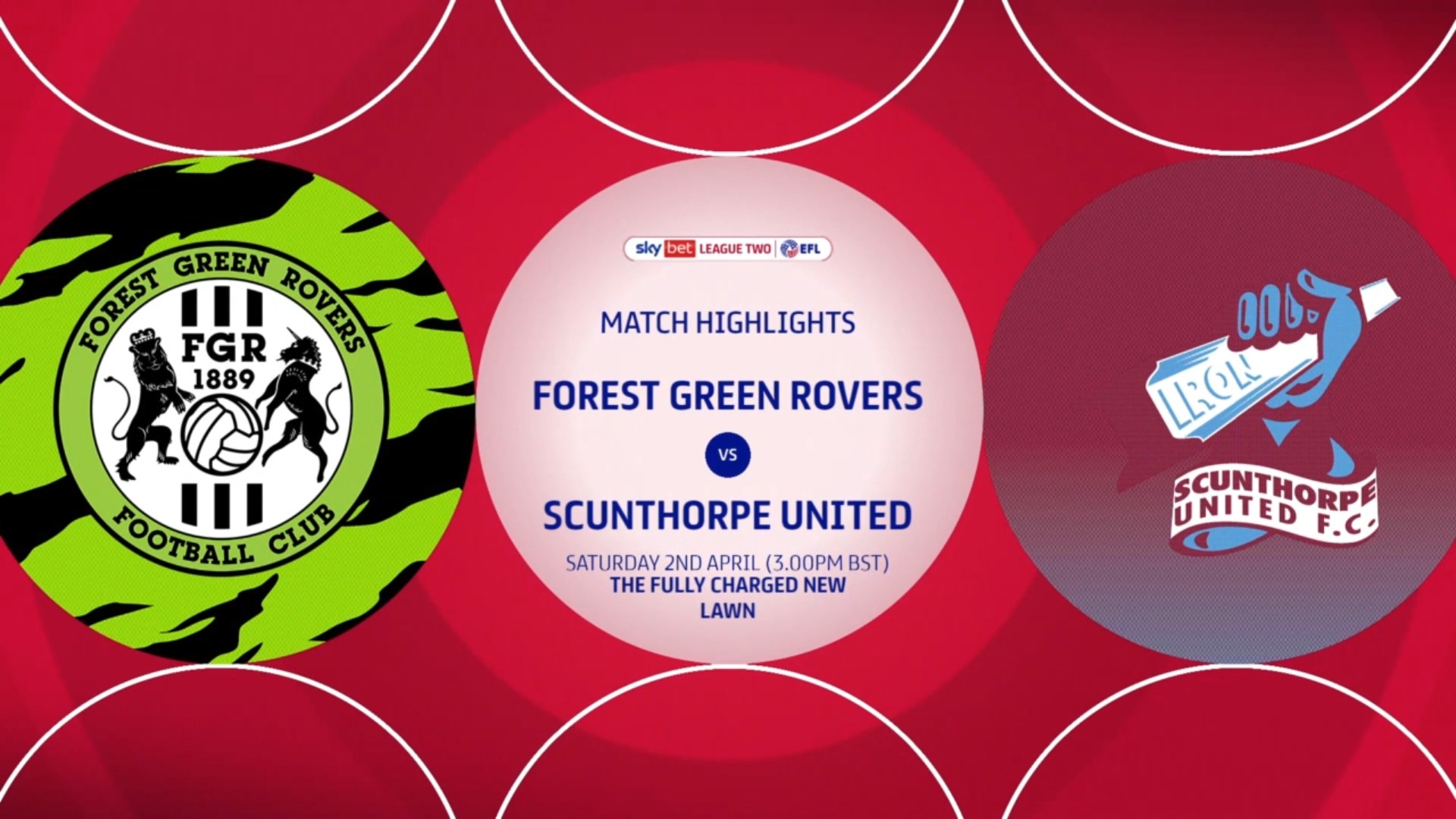 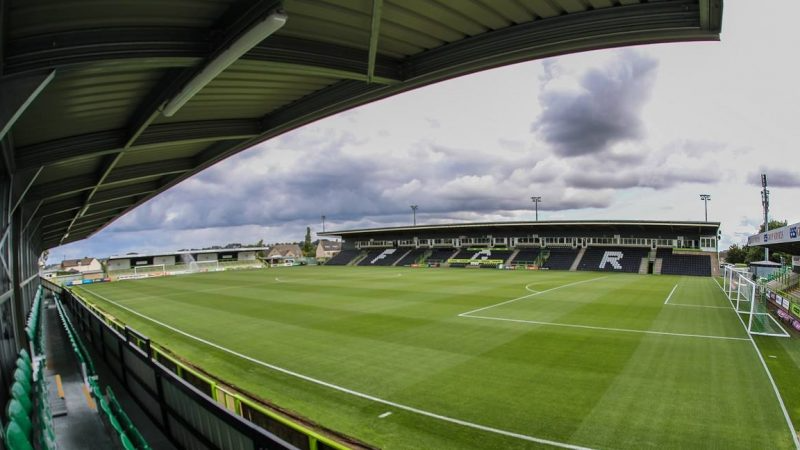