The Iron host a competitive game at the Sands Venue Stadium for the first time in 182 days on Saturday, with Port Vale coming to North Lincolnshire for Round One of the Carabao Cup. 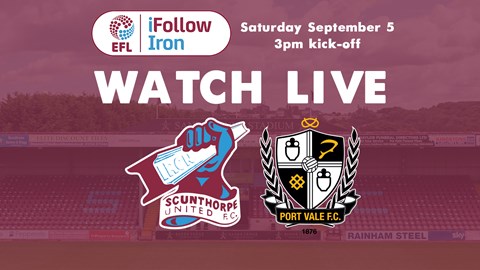 First Team Manager Neil Cox takes charge of his Scunthorpe United side for the very first time competitively as the Iron look to make it beyond the first round of the competition for the first time in three seasons.

The side face fellow League Two opposition, who they gained four points from in the league last season, with the win coming on home soil.

Port Vale narrowly fell to a 2-1 defeat in their opening game of pre-season at home to Blackpool in mid-August, before reversing that scoreline to win against Fleetwood Town in their second game back. Since then, they've won three on the bounce, including a 2-1 win over Nottingham Forest and, most recently, victory over Rochdale by the same scoreline - with all three strikes penalties.

Theo Robinson returned to Vale Park to bolster the Valiants' ranks, while David Fitzpatrick and Danny Whitehead also joined the Stoke-on-Trent side. Zak Mills and Devante Rodney were their early additions, with both joining in July.

Their latest recruit was last weekend, with goalkeeper Dino Visser joining the club, while Rhys Browne mutually terminated his contract to leave the Valiants.

The side ended last season in eighth place following a points-per-game finish, although Vale will have felt, had the season continued, they would have made it to the play-offs as they were unbeaten in 10 matches and had recently beaten play-off final winners Northampton Town 1-0. Three consecutive draws, one of which against the Iron, prior to curtailment proved to be their achilles heel when the final table was drawn out.

The Iron will be without forward Kevin van Veen who undergoes a knee operation following two-weeks of self-isolation. The Dutchman will then spend a period of time on the sidelines as he recovers and then works back to full fitness.

New signing Emmanuel Onariase will also miss the opening games of the season with a hernia problem, which has also required an operation to rectify. The former Dagenham and Redbridge central defender played 30 minutes of United's 2-1 win against Hull City Under-23s during pre-season and is back with the physios to recover and get up to full fitness.

New signings Myles Hippolyte, Ryan Loft and Kenan Dünnwald-Turan come into contention for their debuts after joining the club in the last week.

Elsewhere, Jordan Clarke, Harrison McGahey (both calf) and Olufela Olomola (hamstring) are all sidelined for this cup match, although McGahey may have a chance of being fit for the EFL Trophy trip to Lincoln City on Tuesday if he continues to progress.

The Iron defeated Vale 2-1 at the Sands Venue Stadium back last November, with Kevin van Veen and Kgosi Ntlhe scoring the goals after the side had originally trailed.

Meanwhile, back in February, United twice came from behind to gain a point, with Alex Gilliead and George Miller notching the goals at Vale Park.

In total, the two sides have met on 44 occasions with the Iron marginally ahead with 14 wins to Vale's 13. The remaining 17 games have all been draws.

The two sides have met in the competition once before, back in 2009-10 when it was named the Carling Cup. The tie came in Round Three with a 2-0 Scunthorpe win after extra time setting up a fourth round tie at home to Manchester City.

Elsewhere, two of the previous ties have been in the FA Cup, while one has been in the EFL Trophy. The remaining 40 games have all been in the league.

ELSEWHERE IN THE CARABAO CUP

The Iron were beaten 2-1 at home by Port Vale in the first round of the Carabao Cup on Saturday, in what also happened to be the team’s first competitive game of the new season.

Within moments of the match starting there was a free kick for David Worrall which resulted in an attack from the visitors. This was cleared away by Frank Vincent.

Three minutes in, Jacob Bedeau got down the left side and sent a cross in but it went into the arms of the keeper.

A minute later, Tyler Cordner on the edge of the area passed the ball across the box. Ryan Loft got to the ball before the ball was gathered by the keeper.

With six minutes gone; Port Vale had another attempt on goal. Mark Cullen had a shot on target but it went into the arms of Rory Watson and was well defended.

With 13 minutes played, a left-footed shot from Tom Conlon saw the first real attempt from the visitors which narrowly looped over the bar.

15 minutes in, and Colclough had another attempt from outside the area. This however went over the bar.

17 minutes gone, Alex Gilliead rapidly made a run down the right side. The Iron kept up the pressure and had another attempt from Colclough that was also blocked.

Later, the visitors had a right corner taken by Worrall. This was defended well by Cordner and cleared.

With 21 minutes gone, Abo Eisa had a shot on goal which was tipped wide and went out for a corner on the left.

Then, Cordner headed back towards the six-yard box before this again went out for a goal kick.

Two minutes later, Eisa struck a long-range shot from the left following a run. The cross was powerful and went wide for a corner. This set-piece was played short before Ryan Loft had his shot blocked.

30 minutes in, Eisa made a dangerous run down the left after playing a one-two. Brown made a great save and got a hand to it. This resulted in a right corner, but the ball proved hard for the visitors to clear.

After 39 minutes, Cullen headed towards goal for the visitors after a right-wing cross which was not a problem for Watson, who collected it easily.

Soon after, Loft was brought down while he ran forward. But in the end, it was Vincent who had his shot towards goal blocked.

With 45 minutes played, Lewis Spence had a low powerful shot on target that was defended brilliantly by Brown.

In the six minutes of extra time, Colclough got the first yellow card of the season after a foul.

In the fourth minute of first-half stoppage time, Port Vale had the first goal of the game as a left footed cross saw Zak Mills poke the ball home. A moment later, Devante Rodney sent a long-range volley just wide of the target.

Wth 52 minutes gone; Colclough passed to Eisa, who made a run down the left before he was fouled. This resulted in a free-kick that curled wide of the goal post.

A minute later, Eisa took a right corner. The ball was however blocked and went out for a corner on the opposite side. This was taken by Vincent but cleared away by Nathan Smith.

Again, another right corner by Vincent was taken short to Eisa. After the Iron had good possession it was cleared.

57 minutes in, Eisa showed his quick pace after a run down the left. He stuck the ball but it was placed behind the goal and went out for a goal kick.

Three minutes later, a right corner taken by Worrall spun into the air and was cleared to half way before Port Vale got possession again.

With 66 minutes played; after a nice set piece by Loft and Vincent, the ball reached the area before Brown collected it.

With 68 minutes gone, Colclough forced the ball down the right side before crossing it to Loft who lifted it nicely in the back of the net, and this was the equaliser for the Iron on the forward’s debut.

Two minutes later, a free-kick from Worrall was crossed into the box to Nathan Smith, who headed it forward. Watson got a hand to it before he collected the ball.

72 minutes in, a free-kick for the Iron resulted in a few shots by Loft, Gilliead and Cordner during a scramble. These were well defended by Brown, before the final shot went over the bar for a goal kick.

With 81 minutes gone, Worrall received medical treatment after a foul. However, Cordner headed the free kick away.

With four minutes of normal time left; Watson made a good save as the visitors threatened.

In the four minutes of added time, a throw-in for Port Vale saw the ball crossed high into the box. This was easily picked up by Watson.

However, in the fourth minute of stoppage time, former Iron loanee Theo Robinson netted the winner from close range. Unfortunately, this meant that the Iron exited the Carabao Cup at the first round stage.

The Iron face Lincoln on Tuesday away in the EFL Trophy, and this game can be viewed on iFollow Iron. Click here for details. 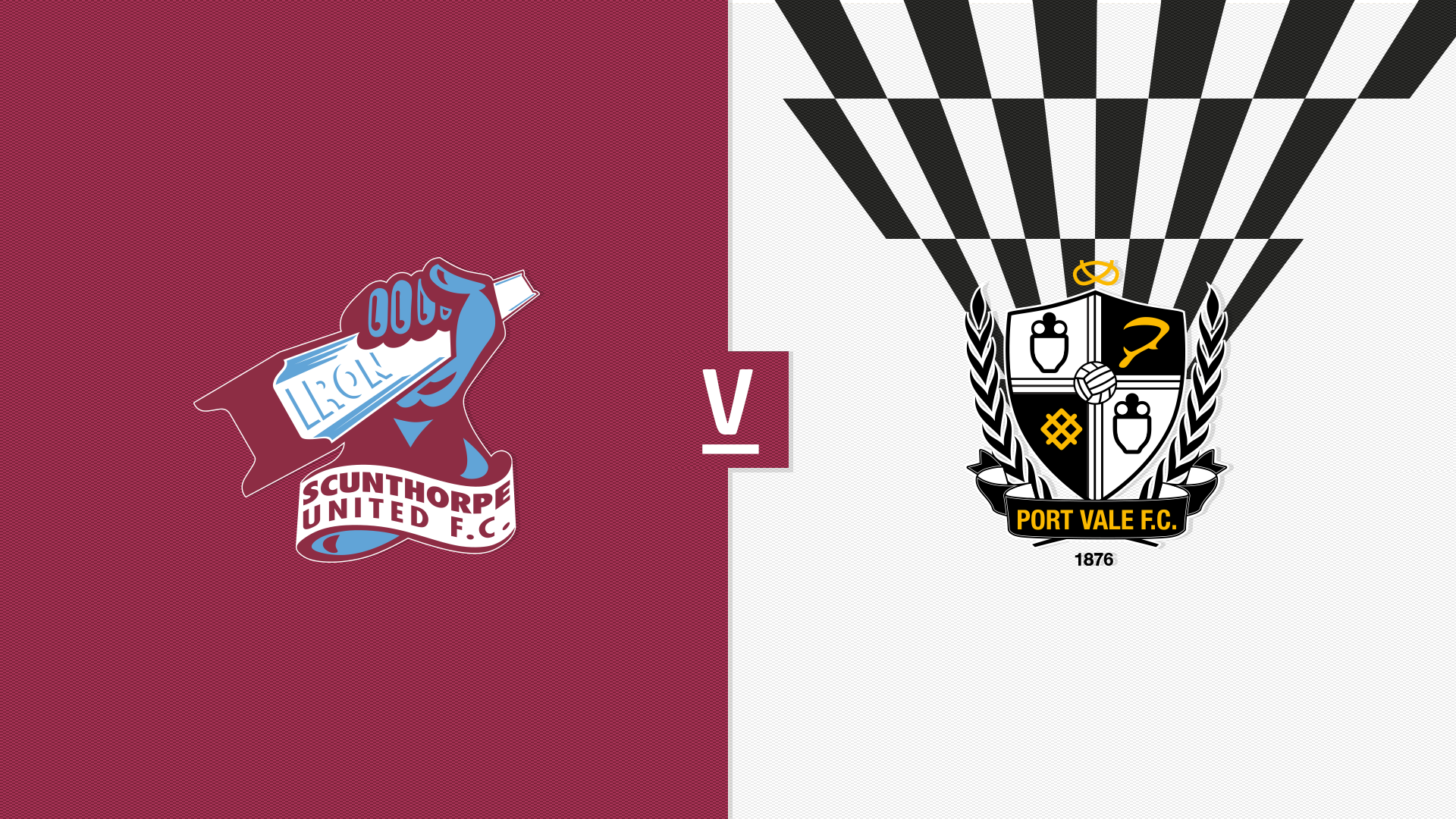 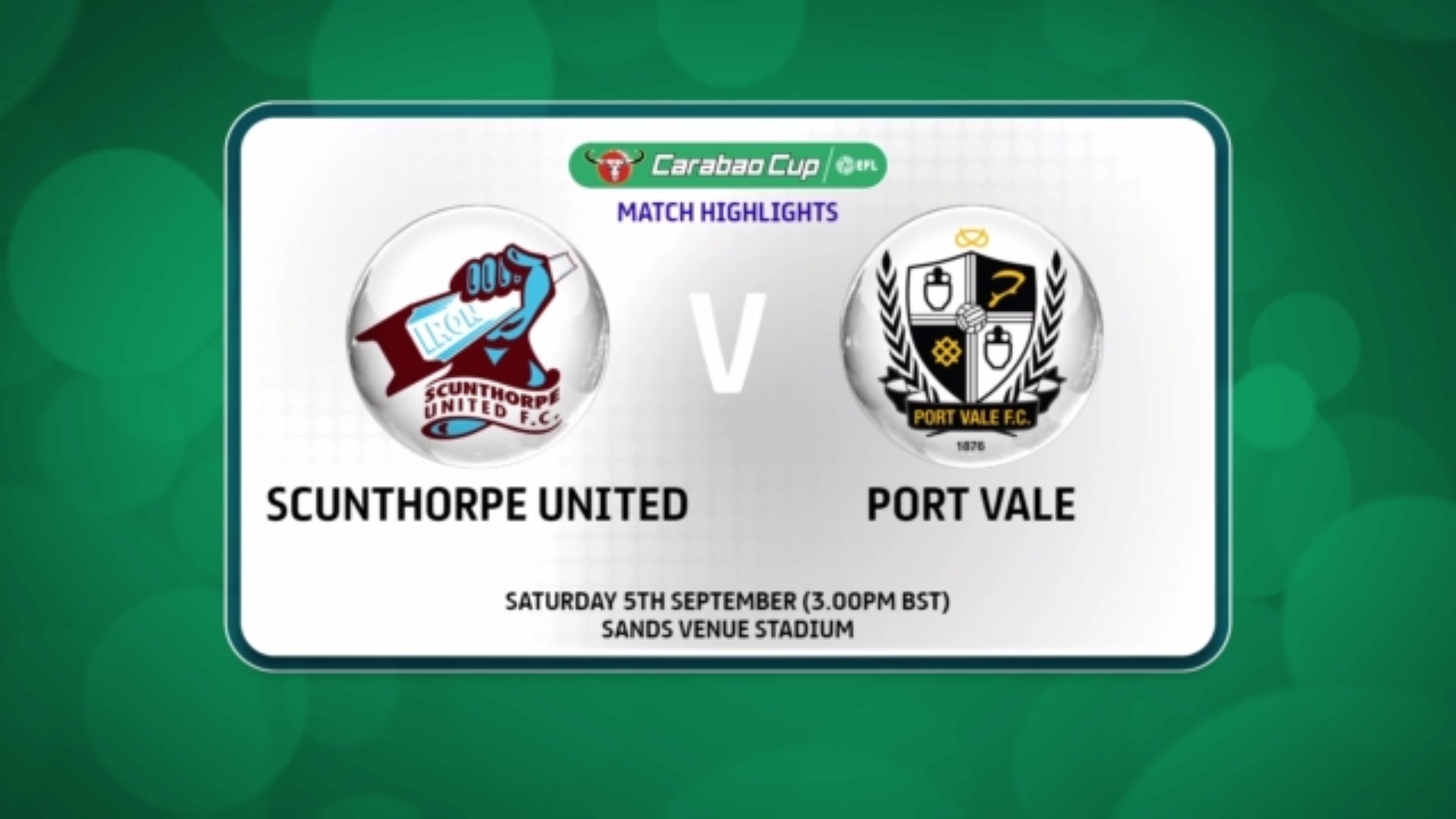 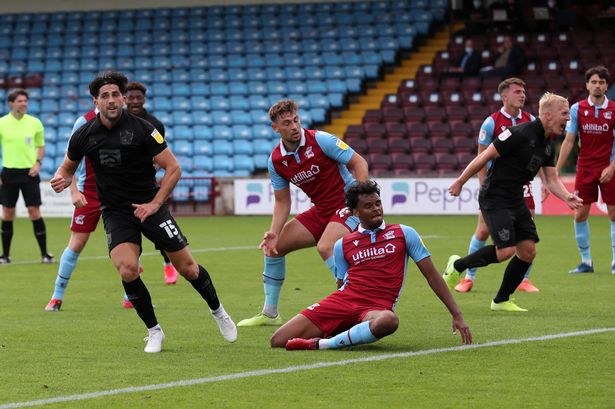