The games keep coming thick and fast for the Iron, with a trip to Oldham Athletic next on the agenda this Saturday (3pm kick-off).

Get your £10 match pass for Oldham v the Iron

United come into the game at Boundary Park looking to get their first win since the end of September, which would provide a much-needed boost after a period of time disrupted by the COVID-19 situation at the club.

The games against Solihulll Moors and Mansfield Town in the Emirates FA Cup and Papa John's Trophy respectively this week have provided chances to get important match fitness into numerous players, with a large number having had to miss around two weeks of training, either due to contracting the coronavirus or because of having to self-isolate after coming into contact with someone who had.

Additionally, players who have been signed after the transfer window closed or coming back from injury have also received valuable minutes.

Saturday's fixture is our first in the league for three weeks and, with three games in hand due to the recent postponements, we arrive into it seven points and four places behind Harry Kewell's side.

The Latics enter the match having won three of their last four games. They were 3-2 victors at Hampton & Richmond in the FA Cup, with Ben Garrity, former Iron Bobby Grant (who signed in the summer) and Danny Rowe on the scoresheet.

Prior to then, they defeated Cheltenham 2-1 at home in the league with George Blackwood and Harry Clarke striking, lost 2-0 at Salford and won 2-1 at Southend through goals from Grant and Zak Dearnley.

Dearnley is their top scorer in the league with four goals to his name, with ex-United loan goalkeeper Ian Lawlor and former Salford man Carl Piergianni topping their appearance charts.

Two other former Scunthorpe loanees on their books are left-back Cameron Borthwick-Jackson and striker Conor McAleny.

United were 2-0 winners away at Oldham on New Year's Day, with Abo Eisa and Matthew Lund getting the goals. It was our most recent victory on the road.

The game saw Jordan Clarke make his first start since January, with Abo Eisa also returning to the team after a chest muscle tear. The match also saw van Veen make first start in the league since March.

Jake Taylor was unavailable for selection as he has to self-isolate for 14 days after coming into close contact with someone who has tested positive for COVID-19. We wish them a swift recovery and look forward to welcoming Jake back soon.

After one minute, Ryan Loft won the first aerial battle from kick-off and linked with van Veen to find Alex Gilliead. His cross was lashed behind for a corner.

Soon after, a tackle came in through the back of van Veen, but no free-kick was given as the hosts were able to play out down the left channel.

In the fourth minute, Oldham were awarded a free-kick on the right channel after a pull-back. Danny Rowe drove the effort just left of the wall, with the ball going across goal and wide for a goal kick.

Soon after, Junior Brown, also making a first league start since January, linked with van Veen on the left, with Brown clearly wiped out after he played the ball, but again no free-kick was given.

With eight minutes gone, van Veen curled a high free-kick into the area from the left side, which former loanee goalkeeper Ian Lawlor did well to claim. In doing so, though, he wiped out fellow former Iron Cameron Borthwick-Jackson, who required treatment.

With 14 minutes played, the hosts won possession with a cross coming in from the right, which Brown headed clear for a corner. Oldham played that short before the ball was headed clear and then hooked clear by Gilliead.

A minute later, Dylan Bamhamboula worked play onto his right foot from the left side and weaved into the area before his shot was beaten away by Mark Howard for a corner. The subsequent sset-piece was played short before it was cleared.

The home team won another corner as Brown cleared after a low cross came in from the left. United subsequently had a throw on the opposite side as the cross evaded everyone.

With 23 minutes played, the Iron won a corner on the left which was sent in by van Veen. Emmanuel Onariase headed it across and Bedeau's effort looped over the goalkeeper but was cleared off the line by Danny Rowe.

After good work in the centre of midfield, Gilliead then tested Lawlor as his shot was deflected into the arms of the goalkeeper.

Then, in the 30th minute, Eisa came close for the Iron as he drove down the left and struck a low effort which was saved by Lawlor low to his left. The move was started by Alfie Beestin, who won the ball back and played the winger in.

A minute later saw a further chance for the Iron as Gilliead and Lewis Spence worked the ball to van Veen. He turned and shaped to shoot with his left foot from 30-yards, with the ball rolling just wide as Lawlor scrambled across.

With 34 minutes gone, Brown slotted a brilliant ball down the left side. Eisa won the race and cut inside Tom Hamer, who wiped him out on the edge of the left side of the area. Van Veen stepped up to take it, curling just over the crossbar.

Two minutes after, an Iron corner was won after a good interchange between a number of players. Gilliead poked the ball to van Veen, who saw his inviting cross headed behind. From the corner, Loft bicycle kicked van Veen's set-play and Lawlor made a superb save to deny him.

United won a further corner moments later as Eisa won the battle down the left once more and breezed into the box before his effort was blocked behind. Beestin won the header as van Veen floated in his latest corner, but the ball bobbled just wide of the target.

With 42 minutes gone, there was a free-kick to the Iron as Spence was wiped out shortly after van Veen was also blocked off. The Dutchman took and his shot was deflected over the crossbar for a corner. Nothing came from it though.

During first half added time, Gilliead's right wing cross narrowly evaded Iron heads as the hosts got the ball clear.

After 49 minutes, Onariase won the first contact from van Veen’s floated free-kick, with Loft winning the second header. Lawlor saved the effort though.

On 52 minutes, Ben Garrity glanced a header wide for the hosts following a move down the left side.

A minute later, the hosts got in a low cross from the left which was cleared by Bedeau. Garrity then had another header following a left-sided cross. This time it was on target, but Howard made the save.

After 55 minutes, Loft looked to steal in on a loose ball towards the edge of the area. Lawlor dropped it on the edge, but quickly recovered.

With 58 minutes gone, Bedeau got in the way of a flick from Rowe and suddenly the Iron were on the attack. Loft played van Veen in on the left. He drove forward before a last ditch tackle saw the ball out for a corner.

From this, United took a deserved lead as van Veen’s corner was headed away, but his second ball was dinked in and found Bedeau all on his own. His first touch was brilliant and his second saw him sweep the ball home for his first goal of the season.

With 65 minutes on the clock, Borthwick-Jackson fired in a cross from the left, searching for Garrity, but the ball flashed above his head and out for an Iron throw.

Two minutes after, Hamer smashed Eisa on the halfway line with a late challenge and avoided a second yellow card, receiving just a talking to.

Then, moments after, van Veen slid in and dispossessed his man and looked to feed Eisa, but the referee belatedly gave a free-kick to Oldham.

The 75th minute saw a corner to Oldham, which was cleared, but the ball looped into the air and the goalbound volley was blocked and then deflected wide for a goal kick.

United doubled their advantage on 79 minutes when Loft played a superb back heel and van Veen picked the ball up, the Latics defenders backed off him and the Dutchman curled an effort into the corner of the net for his second goal in three games since returning.

Soon after, the Dutchman was replaced by John McAtee.

The 82nd minute saw superb play from Spence as he tracked Garrity into the area and poked the ball away from him as he looked poised to shoot.

Then there were bodies on the line inside the Iron penalty area as two goalbound efforts were blocked before Beestin cleared.

Myles Hippolyte came on for Eisa with three minutes left in a further change, and then Jai Rowe replaced Clarke on 90 minutes.

Three minutes into four of stoppage time, Bamhamboula headed off-target following a cross from the right. While at the other end, with the final Iron chance of the game, there was almost a third as McAtee strode into the area and drew a fine save from Lawlor. 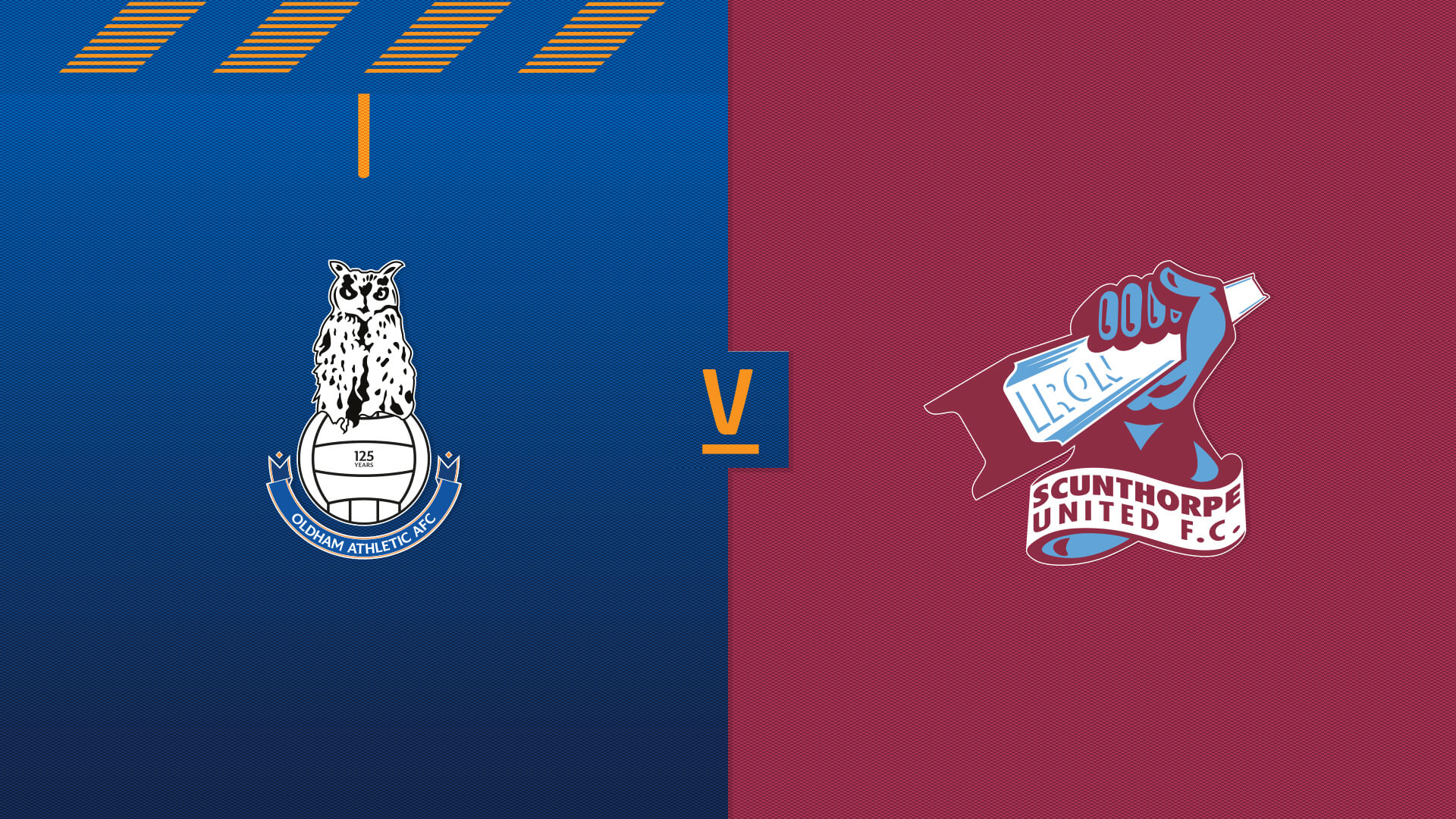 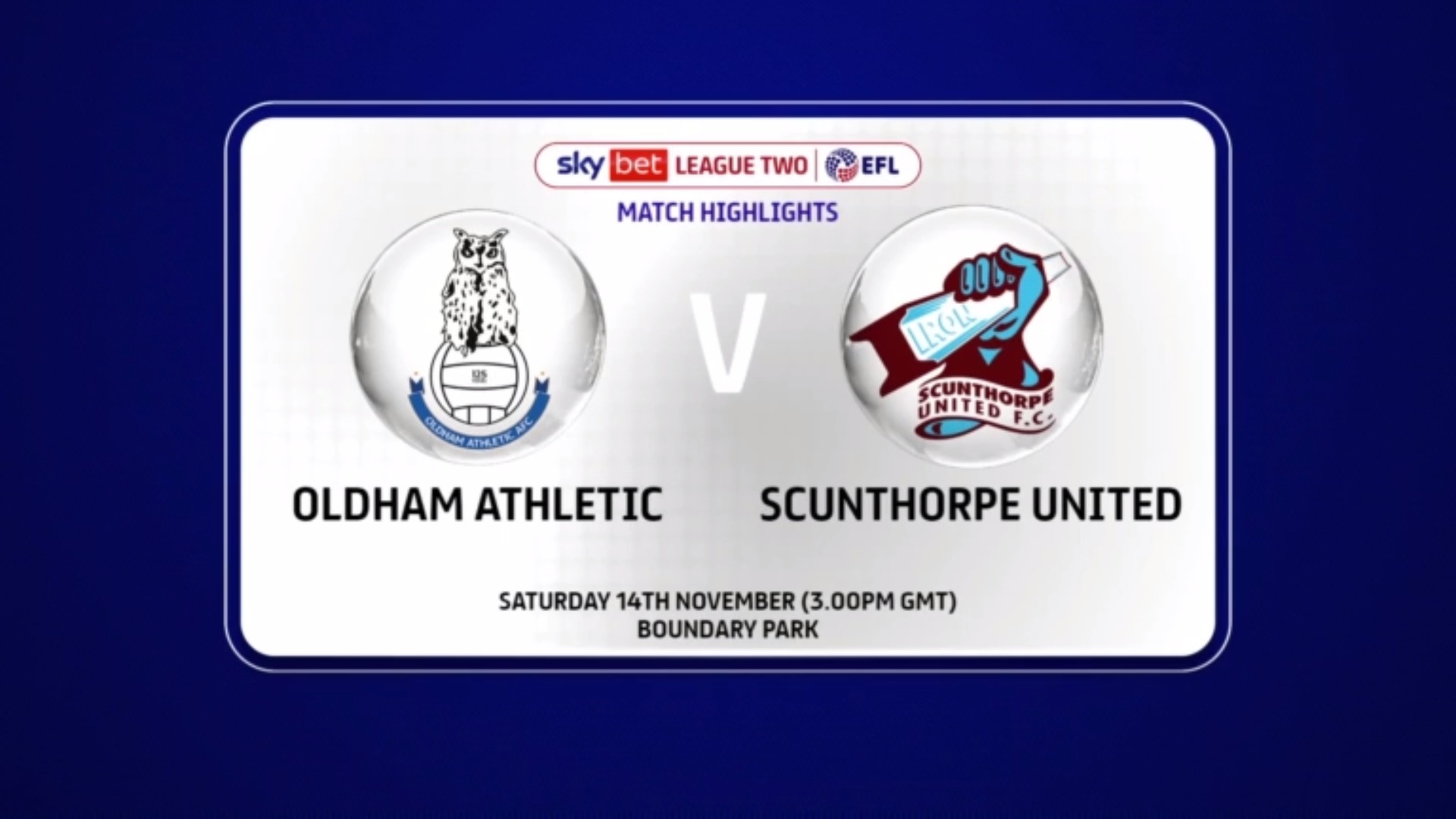 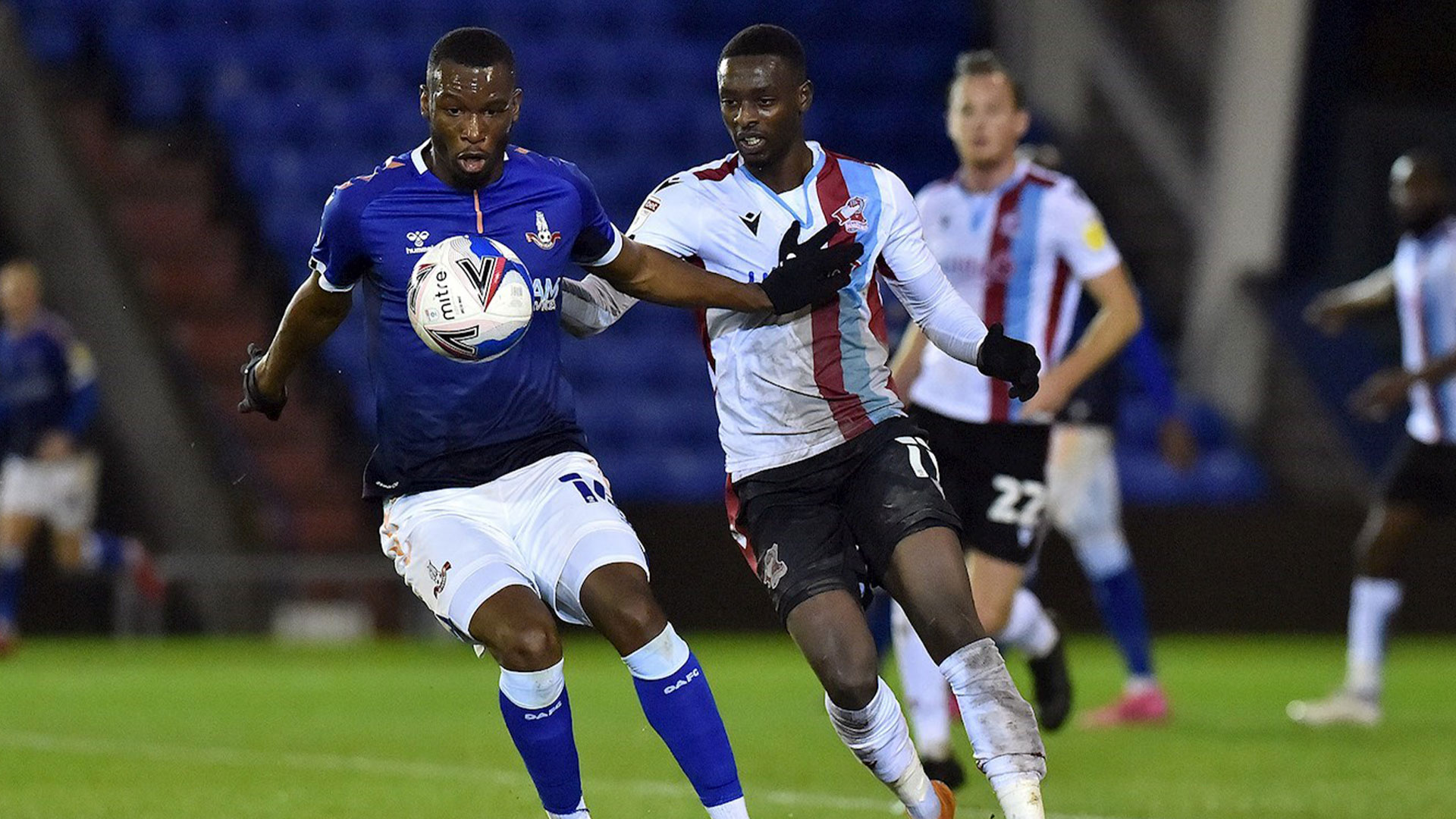