The Iron play their third game inside a week when they make the trip to face Colchester United on Friday night (7pm kick-off). 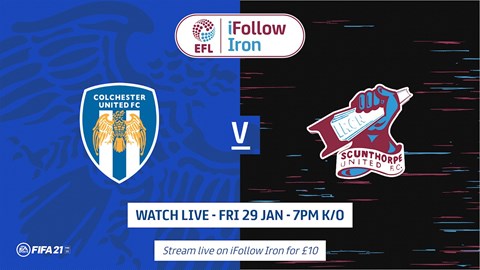 United come into the match on the back of two home wins in quick succession, defeating Grimsby Town 3-0 last Saturday and then Port Vale 2-0 at the Sands Venue Stadium on Tuesday night.

Buoyed by those results, the Iron head to the JobServe Community Stadium in confident mood and seeking a result that could bring them up to 14th in the table before the rest of this weekend's matches are played.

Colchester come into the match sitting 14th in Sky Bet League Two, and drew 1-1 at home to Cambridge United in their last home match.

Prior to Tuesday's 0-0 away draw at Stevenage, they were beaten 3-0 at Morecambe and are looking for a first home win since December 5th, when they overcame Grimsby Town 2-1. Their most recent victory came three days later when they defeated us 1-0 at the Sands Venue Stadium.

Top scorer for them so far is Jevani Brown, with eight strikes to his name, while Callum Harriott, who has scored five goals and set up another five, is also a big contributor.

Jordan Clarke (thigh) missed the midweek home match against Port Vale and first team manager Neil Cox ruled him out for a month when speaking after the win at Port Vale.

Harrison McGahey (hamstring) is back in training but the game will come too soon, while Aaron Jarvis (also hamstring) continues to be missing for a total of 10 weeks.

Kevin van Veen continues his rehabilitation, but is ever edging closer to a return. Fin Shrimpton (ankle) is also back on grass, along with Andy Dales (ankle), as they both work their way back to fitness.

United were beaten 1-0 at home by the U's back in December, although it was a game the hosts dominated. 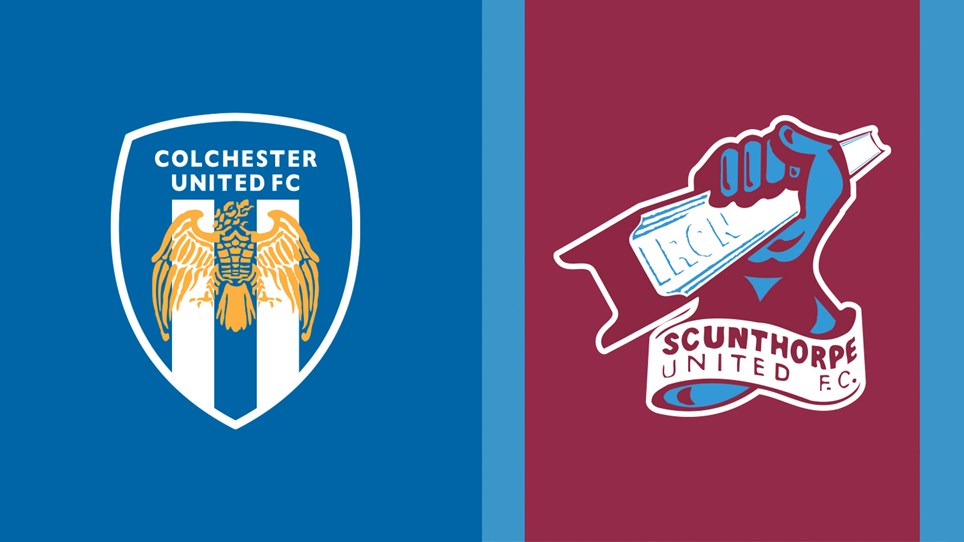 
The Iron’s away League Two game at Colchester United on Friday, January 29th will now kick-off at 7pm.

Alfie Beestin's stunning early goal earned Scunthorpe their third win and clean sheet in less than a week, with the 1-0 Friday night success at Colchester United taking them up to 14th in League Two.

The Iron made two changes going into the game, as Mason O'Malley and Lewis Spence were replaced by Junior Brown and Alfie Beestin.

The game kicked off 15 minutes later than originally planned due to the United team bus experiencing a traffic delay caused by an accident en route to the JobServe Community Stadium.

The first chance of the game came Scunthorpe's way on four minutes as Ryan Loft held off his man to nod the ball towards Devarn Green. He found space for a shot on his left foot, but it was saved by home goalkeeper Dean Gerken.

Scunthorpe took the lead brilliantly with five minutes gone, as George Taft won an aerial header, with Loft doing very well to keep hold of the ball as he found Beestin in acres of space. He drove forward and hit a shot into the roof of the net from the edge of the box for his second goal of the season.

On 10 minutes, home attacker Callum Harriott chested down the ball 25-yards from goal and sliced a left-footed volley towards goal which Mark Howard saved to his right. Moments later, there was a superb tackle by Jai Rowe on Kwame Poku as he looked to bring the ball down the left channel.

Straight after, Colchester's Tommy Smith struck the loose ball following a free-kick into the Iron penalty area by Cohen Bramall. Taft got a block on the effort and Beestin hooked clear.

With 14 minutes gone, the hosts won another free-kick, but Howard came to gather that, sending the ball forward to Abo Eisa. He put the defender under pressure, who cushioned the ball back to Gerken with his knee, with backpass claims turned down.

There was then a break in play as Jem Karacan received treatment following a foul by Harriott. He resumed play but then had to come off in the 18th minute to be replaced by Lewis Spence, as it looked as though the former Reading man landed awkwardly on his shoulder following that earlier challenge.

The 21st minute saw good defending from the Iron down the left side with Rowe, Beestin and Alex Gilliead tightly marking their men to push Colchester back into their own half.

There was then brilliant play from Gilliead as he put in a big sprint to catch Bramall’s run down the left and intercept his cross, giving the hosts a corner, which Taft headed away.

In the 24th minute, Harriott got half a yard for a low shot from range, but Howard watched it all the way and made a good save.

At the other end, Gilliead and Rowe interchanged going forward down the Iron right. A couple of one-twos throughout, but the home defence did well to shield the ball out from the final through ball.

Two minutes later, there was a chance for a second for the Iron as Gilliead broke clear of his marker before finding Rowe for the first-time cross. Loft connected with the header, but the effort glanced wide of the far post.

Not long after, Emmanuel Onariase read a free-kick into the Iron penalty area to nod the ball out for a corner with two Colchester players lurking. The subsequent set-play then came to nothing.

In the 33rd minute there was a quick counter-attack from the Iron as Eisa nodded to Loft. He held the ball before being played through on the right. His low cross searched for Green and was fumbled by substitute goalkeeper Shamal George for a corner.

After that was cleared, Eisa picked up the ball as the Iron won possession back and he drove forward into the Colchester penalty area before the home defence got a toe in as he cut onto his right foot.

The 40th minute saw another break in a bizarre first half as the senior assistant referee Garry Maskell had to be replaced by fourth official Leigh Crowhurst. As a consequence of that and the earlier substitutions, there were seven minutes of added time at the end of the opening period.

In the first of those minutes, Noah Chilvers was fed the ball on the edge of the area and dragged an effort wide of the post with Howard covering his post as the ball went wide.

Then, in the last of them, Loft almost got in down the right but his final touch was too heavy and it ran through to the ‘keeper.

The second period saw a fast start from the home side as they came forward. Spence slid in to intercept the first cross before the Iron won a goal kick. Then, Eisa looked to feed Brown into the area following the left-back’s forward run but the hosts cleared for a throw.

With 50 minutes played, Howard stretched to gather Bramall’s powerful left-footed cross from the left as he got forward down the channel.

Two minutes later, Loft stole in on a loose ball and combined with Eisa, but Colchester came forward on the break with Onariase coming in with the last ditch tackle inside the box. Next, Brown was yellow carded as he went in on Miles Welch-Hayes and won the ball, but it was deemed as reckless by the referee.

The next Scunthorpe chance came in the 58th minute when Beestin connected with a header from Gilliead’s latest cross into the box, but George made the save.

With 62 minutes gone, Beestin emerged with the ball and shaped to shoot before looking to slip the ball through into the area but it took a ricochet and was cleared.

Two minutes after, Colchester's Harriott cut onto his left foot and fired a powerful dipped shot from range, which Howard parried and smothered at the second attempt.

The same player came close again a minute later, as he was fed the ball on the right side of the box and shaped to fire into the far corner, but sent his effort wide of the target.

Then, straight after that, Jevani Brown sent the next Colchester effort into the stands as he found space 25-yards from goal.

Next, Rowe was allowed to stride in space down the right and cut inside before searching for the run of Loft, but George was out to gather the ball.

Scunthorpe made their second change of the night in the 69th minute as John McAtee came on for Green.

Four minutes after that change, the Iron broke following a good tackle on half way. Loft surged forward and slipped McAtee forward. His shot ended up in the net but the flag was up for offside.

The Iron players were furious on 75 minutes that a throw was awarded against them but they used that to hound the ball down, with Loft stealing in before being brought down by Smith, who got a yellow card.

From the resulting free-kick, Gilliead floated in a brilliant ball for Taft. He headed across goal but the hosts cleared away the danger.

The Iron made their third and final change of the night in the 82nd minute when Myles Hippolyte came on for Loft.

Looking for an equaliser, the home team put the pressure on late on, and Courtney Senior dragged a left-footed shot wide of the target as he cut in from the right channel in the 83rd minute.

Just a minute later, there was a superb tackle from McAtee just in their half as Eisa ran through and found the net. The assistant referee flagged for a free-kick from the superb challenge and Eisa even got a yellow card.

There were five minutes of time added on at the end of the second period, and Bramall had a chance two minutes into those as he curled a free-kick over the crossbar for Colchester. Otherwise, the Iron managed to hold on for three more hard-earned points.

United return to action next Saturday when they host Oldham Athletic (3pm kick-off).


The Iron’s away League Two game at Colchester United on Friday, January 29th will now kick-off at 7pm. 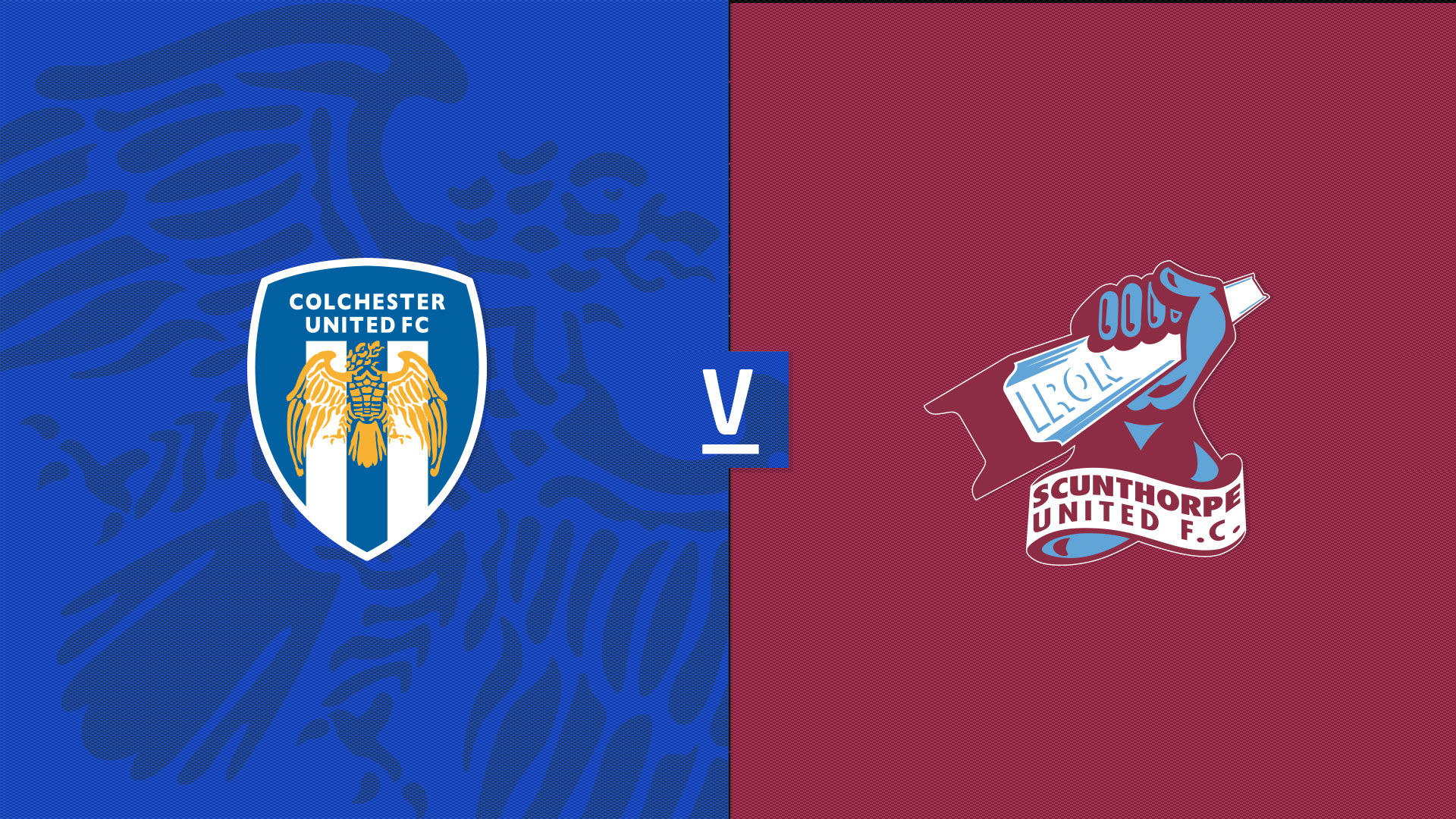 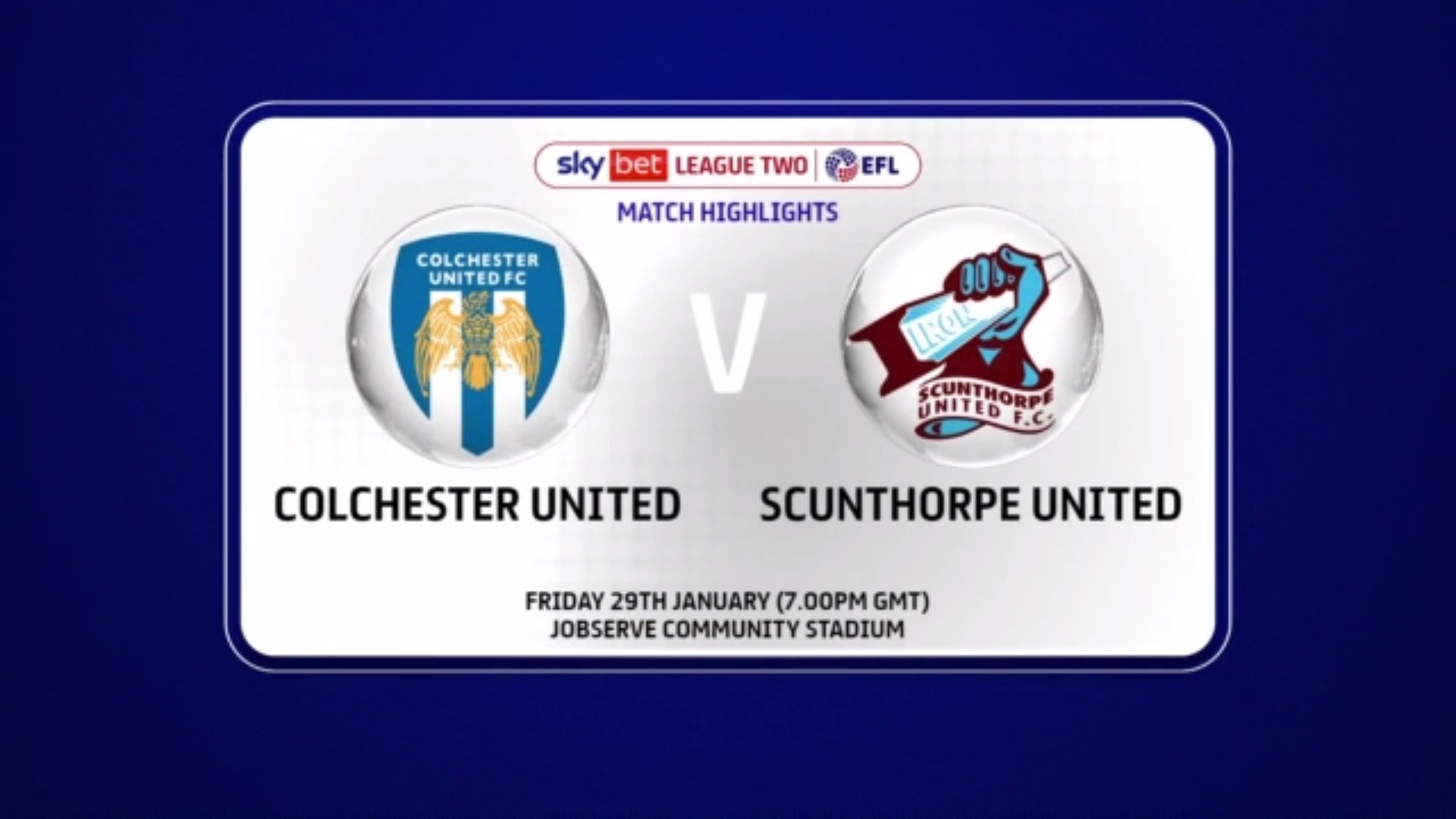 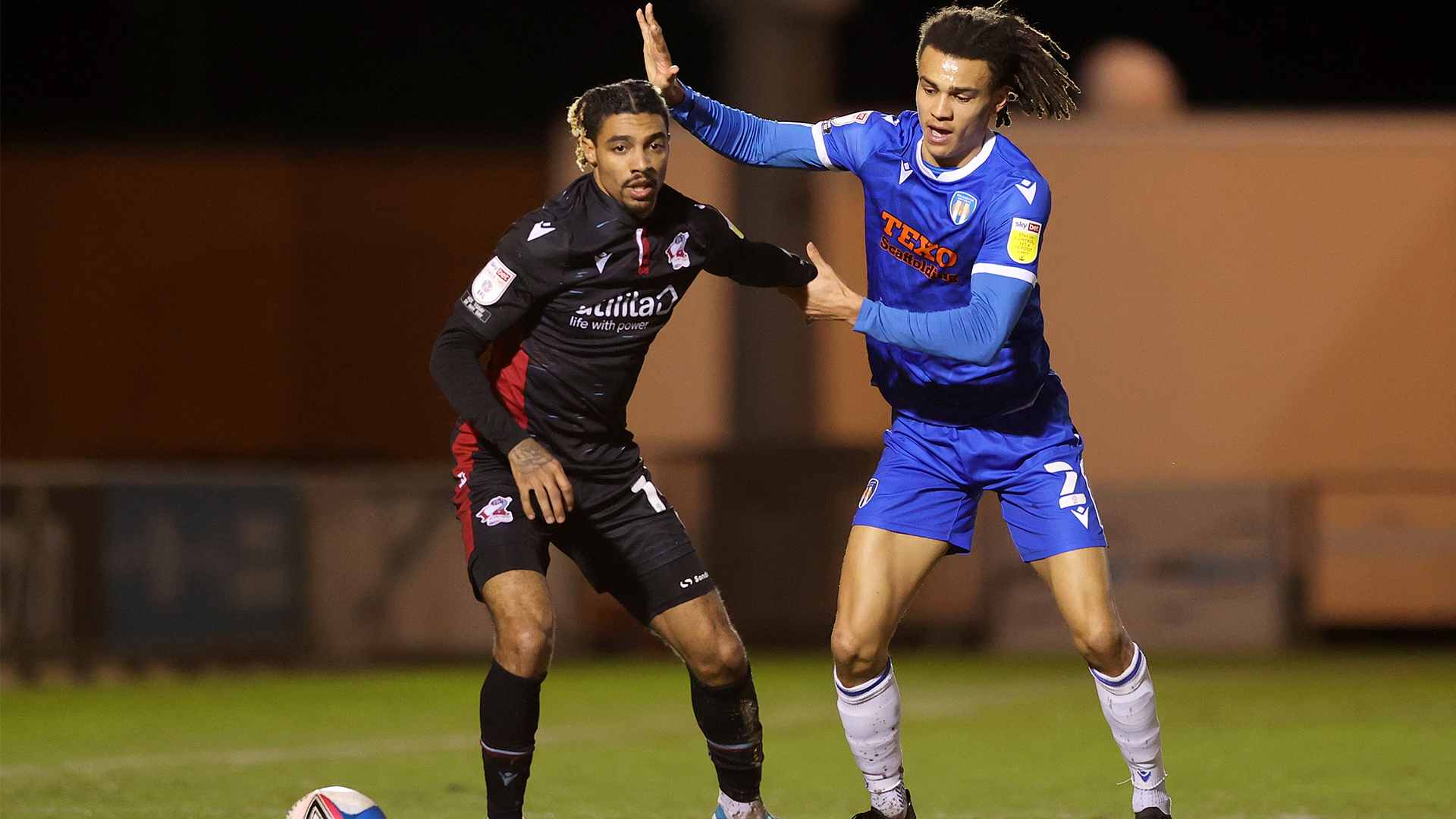