The Iron will be looking to get their first win in three games when they make the Sky Bet League Two trip to take on Walsall this Tuesday night. 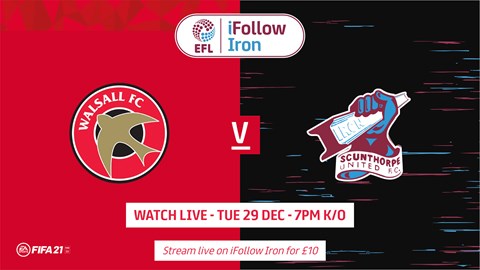 The two sides meet at the Banks's Stadium as United aim to bounce back from the 1-0 defeat at local rivals Grimsby Town and the subsequent 3-2 home Boxing Day loss to Mansfield Town.

Prior to the Grimsby game and the December 12th trip to Southend, Scunthorpe had won three away games in a row and will be seeking to get back to the form on the road that saw victories at Oldham Athletic (2-0), Port Vale (1-0) and Harrogate Town (5-2).

We are 20th in the division at present, though a win at Walsall could take us up a couple of places.

The Saddlers come into tonight's match sitting ninth in the division and just one point off the play-offs, with a win capable of bringing them up to seventh.

They had disappointment three days ago though when Salford City defeated them 2-0. Their last home game saw a 4-3 victory over Port Vale in a match where Jake Scrimshaw and Dan Scarr both scored twice.

Prior to Boxing Day, they had been unbeaten in six games and won the most recent four.

Top scorer for Darrell Clarke's men is Elijah Adebayo on eight goals, with Caolan Lavery following on four. Scarr tops the appearance charts with 20 league starts to his name.

Emmanuel Onariase was set to be assessed after coming off during the Mansfield game with an ankle injury. 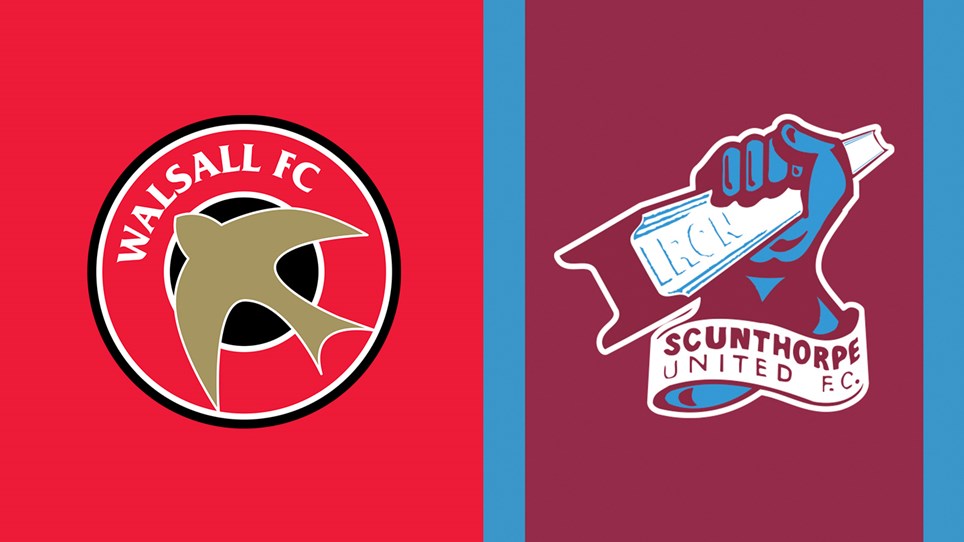 
The Iron’s away game against Walsall on Tuesday, December 29th will now get underway 45 minutes earlier.

United returned to winning ways and ended 2020 the right way with a 2-1 away victory at Walsall on Tuesday night.

Myles Hippolyte put Scunthorpe ahead in the first-half with his first goal for the club, before the hosts levelled through Wes McDonald early in the second half.

After Mark Howard saved a penalty from Josh Gordon, Alex Gilliead struck the decisive goal on 69 minutes, rifling home his first goal of the season.

After defending a free-kick from the left side in the second minute, which Alex Gilliead headed away, United attacked down the other end and won a corner on the right side.

Gilliead went short to Alfie Beestin, but he miss-kicked before the hosts cleared for another corner.

From it, United had the first chance of the evening as Jacob Bedeau came close while Hippolyte then drew a save from Jack Rose following a left-wing ball in. United continued the pressure and Taylor took down the cross but Rose pounced on the ball.

In the seventh minute, Cameron Norman squeezed in a cross from the right with Jack Scrimshaw winning the header, but the ball went over.

With 11 minutes gone, Beestin played the ball to Taylor, who drove forward and fired a low left-footed shot across goal which Rose had to get down to save.

Then, after good hold-up play from Loft, Taylor had another effort blocked away by the home defence on the edge of the area before Mason O'Malley sent in a left-wing cross which was headed over the crossbar by Loft.

After 14 minutes, Walsall's Wes McDonald cut onto his right foot and angled a shot across goal and wide of the target.

Four minutes later, Loft and opposition goalkeeper Rose collided as the Iron striker chased a loose ball and was pushed in the back by a home defender. Both stayed down in a heap and received treatment. Despite the push in the back, which caused the collision, it ended in a free-kick to Walsall and a yellow card to Loft.

Straight after that delay ended, in the 21st minute, the hosts come forward, but Mark Howard read the low ball into the box and gathered it with Elijah Adebayo looking to make a touch.

Two minutes after, there was a free-kick to the Iron on the left channel. Gilliead curled it in, but the ball was only cleared as far as Jordan Clarke. He saw his cross blocked for a throw.

With 27 minutes gone, United went ahead through Hippolyte's first Iron goal. O’Malley’s free-kick into the area looked to have been cleared but the clearance rebounded into the path of the No 15 who slammed the ball home.

Straight after, Beestin tracked back to dispossess Adebayo before Taylor nipped the ball past to Loft. There was a good advantage played by the referee as the ball went down the right. Hippolyte met the cross, with the effort going wide.

On 32 minutes, Howard did well to palm away a cross heading towards the goal, with Adebayo lurking. The hosts then got a free-kick on the nearside as Hippolyte came off worse and required treatment. He was back up shortly after though and the set-play was dealt with by the Iron, following a great defensive header from Cordner as he cleared the free-kick. The second ball came into the box with Dan Scarr winning the header, but Howard made the save.

Three minutes later, the Iron won a corner on the far side as the Walsall defence shielded the ball out of play, only for the assistant to flag for a corner.

For that set-play, Cordner made the run, but it was Loft who met O’Malley’s corner, with the header going just wide.

At the other end, there was superb defending from Clarke as Adebayo chested down a cross with the Iron skipper throwing his body on the line to block the shot.

Then, with 41 minutes played, Wes McDonald drew a fine stop from Howard as he drilled the ball towards the bottom corner. The Iron ‘keeper parried before pouncing on the loose ball.

Just before the half-time break, Green drilled a low cross from the right which Hippolyte almost managed to connect with but the ball drifted away.

There was a half-time change for the Iron as Loft was replaced by Jarvis.

The hosts had the first chance of the second period three minutes in when a right-footed free-kick was taken by Danny Guthrie on the left side, and went wide of goal.

The Saddlers continued to press, and Liam Kinsella found Gordon, who opened up from range and angled a shot goalwards which Howard dealt with.

Walsall equalised with 55 minutes on the clock as a ball in from the right was dispatched into the corner by McDonald.

After 57 minutes, Jarvis and a home defender went in for a 50-50 and the Iron looked to break through, but referee Trevor Kettle belatedly gave a free-kick to the hosts. Jarvis stayed down and requires treatment, and was subsequently replaced by Eisa.

The hosts were soon awarded a penalty but Gordon saw his effort saved brilliantly by Howard, who showed a good strong hand followed by a good reaction from the Iron defenders to run in and clear the rebound. It proved a pivotal moment in the game.

With 66 minutes played, Hippolyte almost had his and the Iron’s second as he chested the ball down and sent a half-volley towards goal, which Rose saved well.

A minute later, Beestin played Green in down the right of the area who drew a great save from the home goalkeeper with a rifled effort that was tipped away. O'Malley tried to follow up with another shot but saw his effort blocked away.

In the 69th minute, Gilliead got off the mark for the season with a low powerful effort from the edge of the area after Taylor came forward with the ball down the left side and played it back to his fellow midfielder who was central.

After 71 minutes, Walsall's Gordon saw a long-range shot deflect towards goal with Howard making a comfortable save.

Just moments later, there were bodies on the line from Taylor and Bedeau as they closed down a shot from the edge of the box, with the hosts soon winning a corner.

Scarr won the first header, with the ball flicked on again towards goal, but Howard made the save.

After 78 minutes, substitute home goalkeeper Liam Roberts’ free-kick was wayward with Taylor taking the ball down for Hippolyte. Roberts scrambled back to his goal, but recovered in time.

Not long after, a third Iron change of the evening was made as Green was replaced by McAtee.

With 86 minutes played, and as the home side pressed, Clarke turned McDonald’s cross from the left behind for a corner, which Howard then claimed.

There were six minutes of stoppage time and, after three, McDonald was denied by Howard who made a save from his long range effort. Then, from a corner for the hosts, Howard made a save from a goal-bound header.

The Iron managed to hold on for three valuable points against a home side who had been in decent form of late.

Scunthorpe's next game is on Saturday when they visit Stevenage (3pm kick-off).


The Iron’s away game against Walsall on Tuesday, December 29th will now get underway 45 minutes earlier. 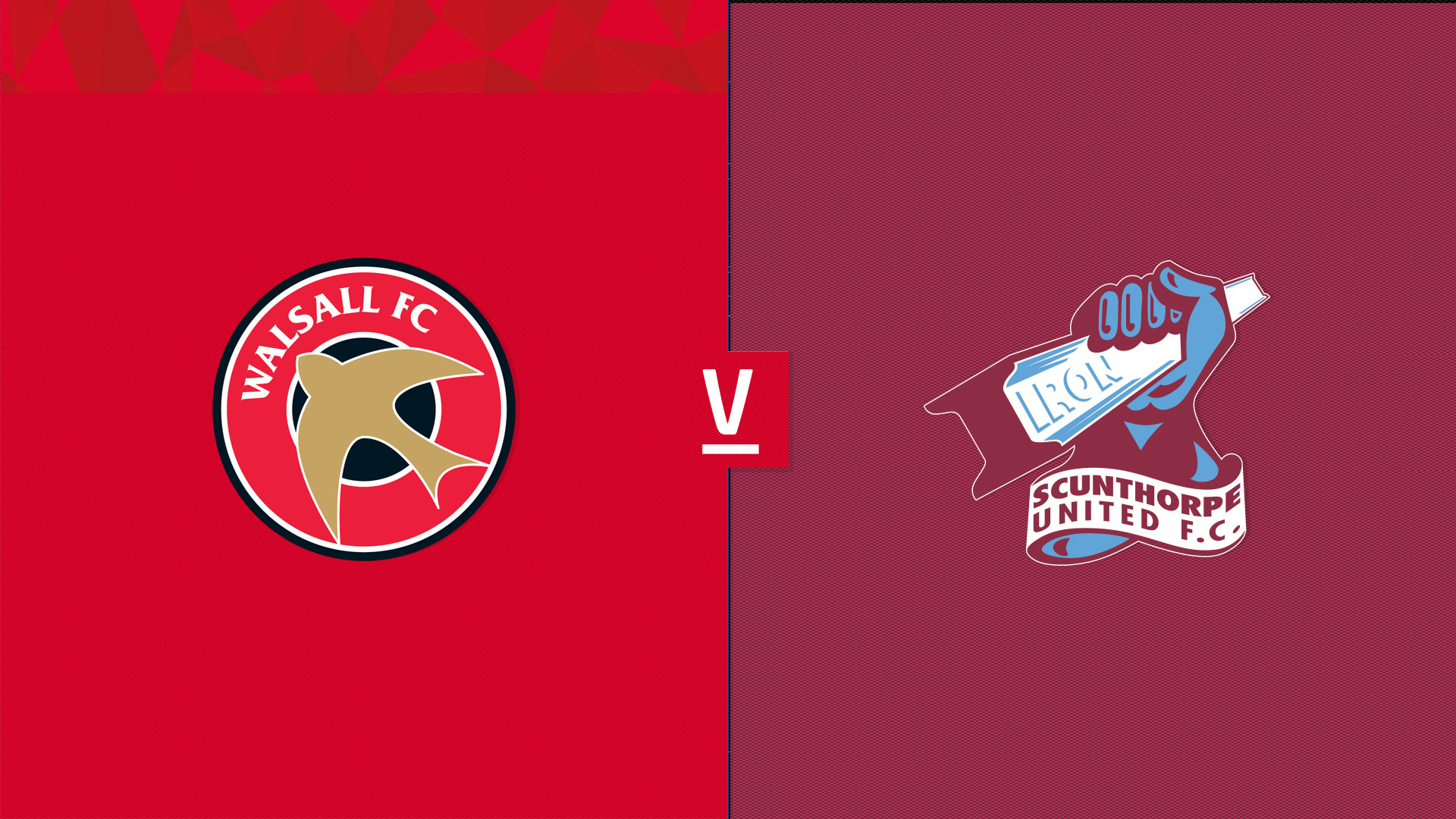 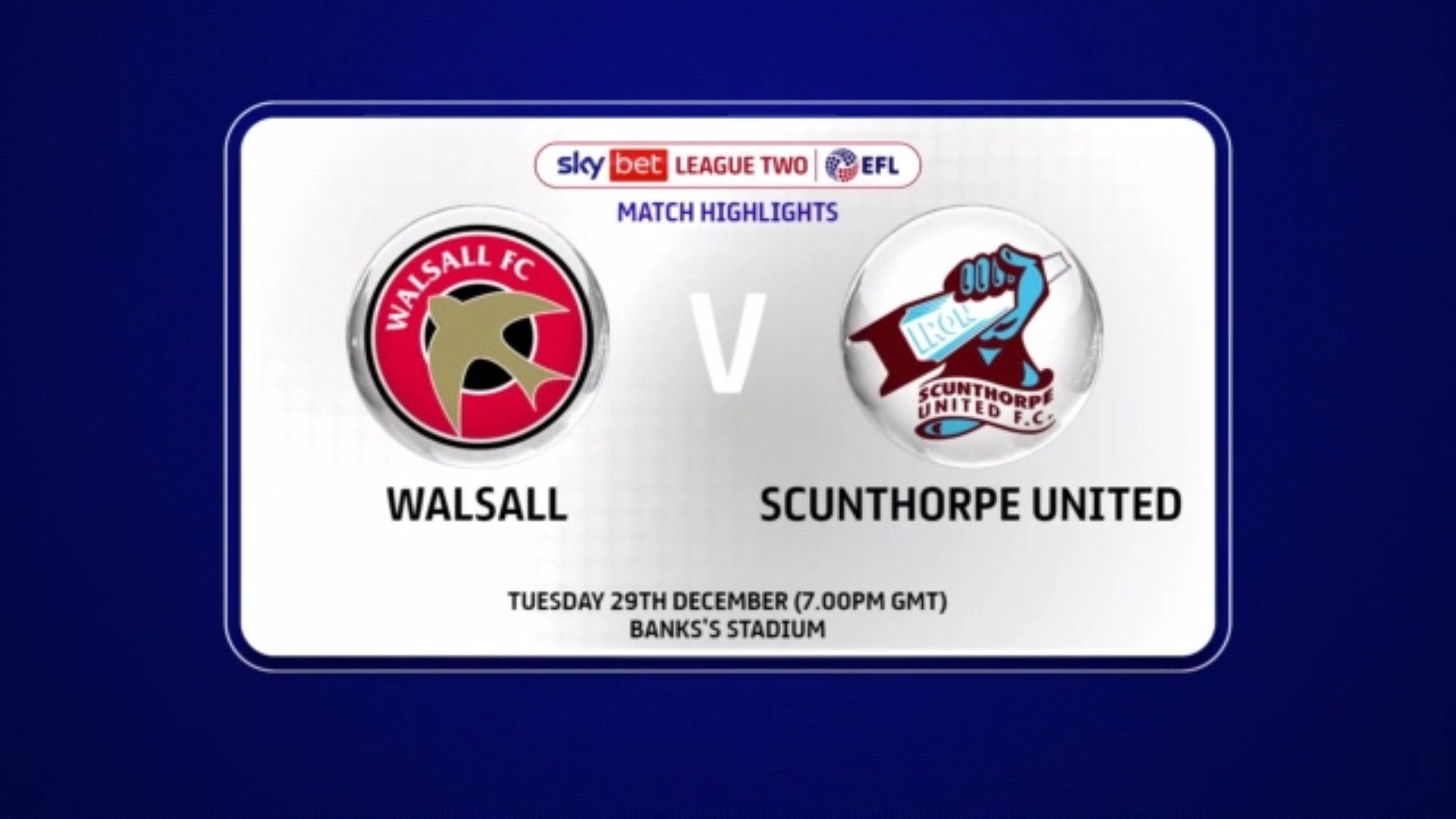 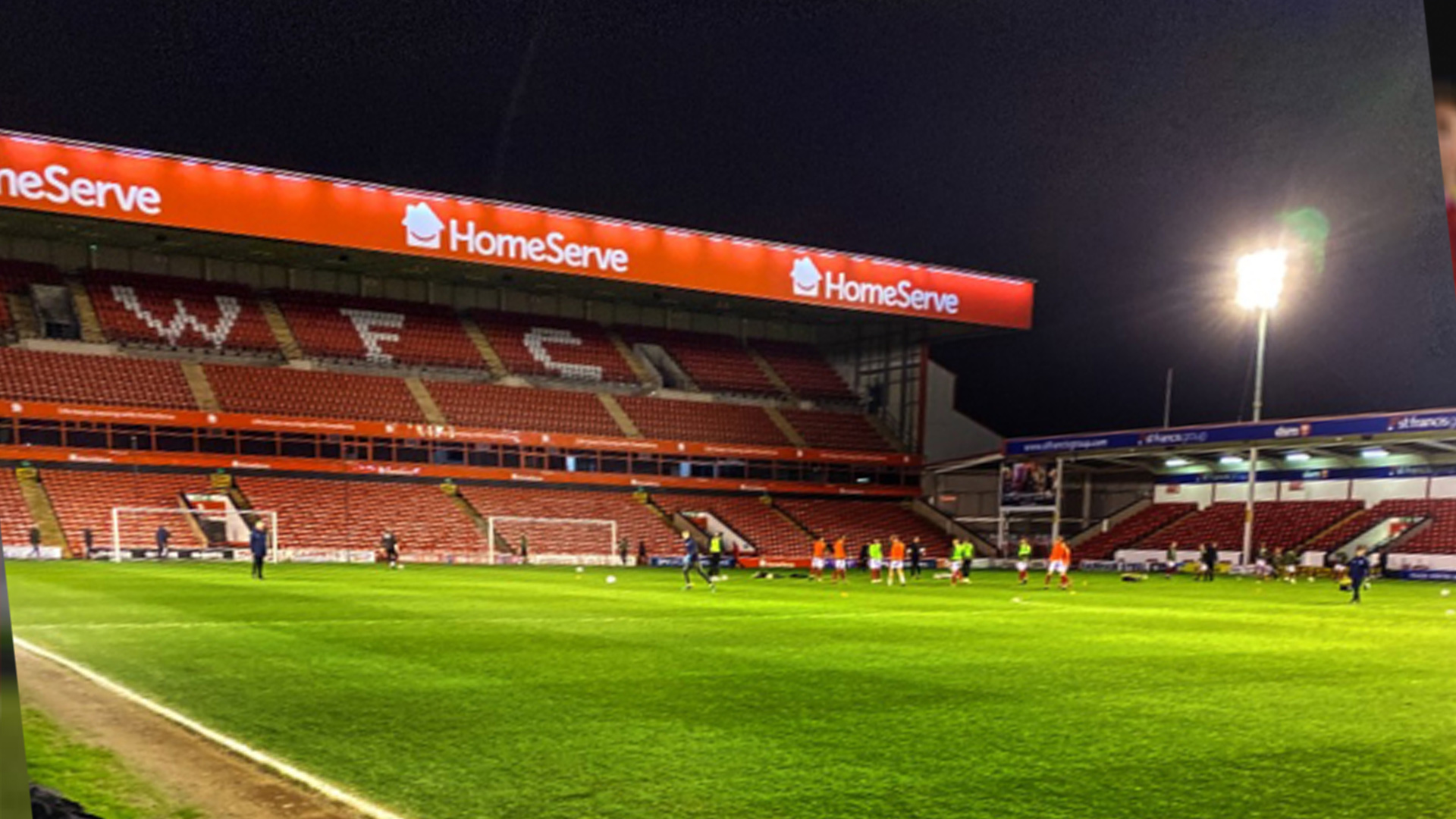