The Iron return to action on Tuesday as they travel to Blundell Park to face Grimsby Town in the first group stage game in the Leasing.com Trophy (kick-off 7.45pm). 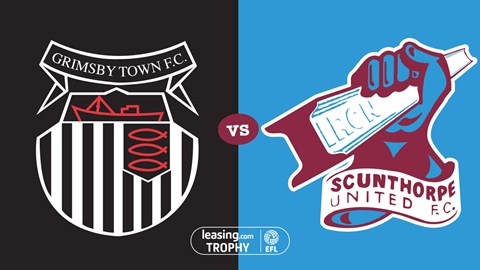 Pay on the night at Grimsby Town

United will be looking for their first victory of the season and come into the encounter off the back of a slender 1-0 defeat to Carlisle United at the Sands Venue Stadium on Saturday, despite a dominant performance.

Grimsby Town came from behind to beat Walsall at the weekend, responding from going a goal down after five minutes. Elliott Whitehouse and James Hanson (two) got to the goals in the 3-1 away win at the Banks's Stadium.

Paul Hurst is likely to give the opportunity to a couple of players who are yet to feature much this season, but will take a similar squad as the one that faced the Cumbrians at the weekend.

James Perch is eligible to play in the match, with his third game of a three-match suspension being served against Mansfield at the weekend, while Lee Novak (ankle) remains absent for the next month or so.

Hurst dealt another injury blow ahead of the Carlisle encounter with Kgosi Ntlhe confirmed to miss around six weeks of action with a back injury, while Jordan Hallam is out for two months with an ankle problem.

Jamie Proctor can't figure as he's already played for Rotherham in the competition this season.

Meanwhile, skipper Andy Butler will miss out after coming off at the weekend with pins and needles in his foot. Jacob Bedeau, who is coming back from a knee injury, is likely to be part of the squad.

Speaking ahead of the game, Grimsby Town boss Michael Jolley said: "We’ve got an incredibly busy schedule coming up over the next month, and we’ve got to use the squad as wisely as possible.

"I’m talking more about the younger-end of our first-team squad, who haven’t had quite so much game time. So we need to make sure that we give them ample opportunity to show that they can do, and keep improving."

The Iron emerged 2-1 victors at Grimsby Town in the group stages of the Leasing.com Trophy on Tuesday night.

Kevin van Veen was at the double as the Iron earned the bragging rights in the Lincolnshire derby.

In the early exchanges, Yann Songo’o battled well for the ball in the final third. The midfielder won possession back for the Iron before switching play out to the right but Ryan Colcough’s cross was too long for Alex Gilliead at the back post.

With 15 minutes on the watch, the hosts won a free-kick. Ethan Robson’s delivery was good but the Iron did well to avert the danger from the set-piece.

Moments later, Rory McArdle and Songo’o were on hand to clear a cross in from the left.

The best chance of the half fell to Songo’o, with 22 minutes played. Perch picked out the number five unmarked in the box but the latter’s header was tame and comfortable for Sam Russell.

In the 28th minute, Kevin van Veen curled in the opener. The Iron were awarded free-kick on the edge of the area for Joe Starbuck’s infringement on George Miller. The striker stepped up, angled the set piece over the wall and into the top corner.

Alex Gilliead tried his luck from range and had Grimsby ‘keeper Russell diving off to his left after the forward let fly from 35 yards.

With five minutes until the half-time whistle, Songo’o volleyed just wide of the upright. One of his teammates took a touch on the effort to lift it high of the target after he latched on to Colclough’s corner.

At the other end of the pitch, a chance went begging for Charles Vernam. The striker looked to round Eastwood before taking a tumble as the ball deflected off his own leg and behind for a corner kick.

McArdle made an important clearance as Vernam came knocking again as the Iron cleared their lines.

After the restart, the Mariners levelled proceedings. With 49 minutes on the clock, Harry Cardwell pounced on the rebound from Ahkeem Rose’s effort to make it 1-1.

In the 58th minute, van Veen took aim from the 20 yards but his effort was straight at Russell between the sticks.

Colclough went close, firing just over the bar as the winger drove into the box after receiving a flick on from Eastwood’s goal kick.

Van Veen netted his and the Iron’s second of the game, with 75 minutes gone. The Iron re-took the lead after Colclough’s pinpoint cross found the former in space. The number 10 had time to control the ball before blasting into the roof of the net.

Minutes later, there were shouts of handball from the Iron but the referee waved appeals away before van Veen saw another shot that looked destined for the back of the net blocked.

Substitute Abo Eisa tested Russell who held on to the ball after the winger beat two men before setting his sights on goal.

James Perch was sent off in the dying stages, receiving a straight red card, as he battled for a 50-50 challenge on the nearside touchline, but the Iron held on for a 2-1 win over local rivals in the cup competition.

Supporters can pay cash on the turnstile or by card at the Blundell Park ticket office for the Iron's Leasing.com Trophy group stage clash at Grimsby Town on Tuesday, September 3rd (7.45pm kick-off).

Travel spaces are still available to purchase in person at the Iron ticket office, by calling 01724 747670 or through visiting www.sufctickets.com.

Visitor seating tickets are for the Osmond Stand at Blundell Park.

Match tickets went off sale from the Iron ticket office at 5pm on Monday, September 2nd.

Official coach travel, costing £8 members and £10 non-members. Departure times are 5.15pm from the Hornsby bus depot, 5.20pm from Ashby Broadway, 5.30pm from the Museum and Baths Hall, and 5.45pm from the Sands Venue Stadium. Travel must be purchased in advance from our ticket office or online via www.sufctickets.com.