The Iron will be looking to record back-to-back home wins for the first time this season when they take on Exeter City this Tuesday at the Sands Venue Stadium (7.45pm kick-off). 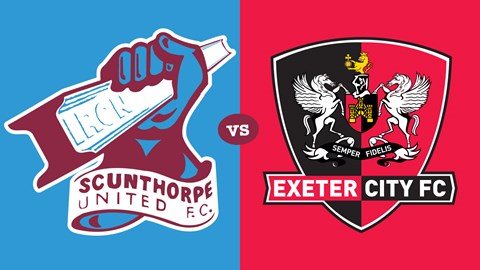 Scunthorpe come into the match on the back of a slender 2-1 defeat at high-flying Newport County, but will be looking to back up their 3-0 victory over Northampton Town last weekend, which saw Lee Novak (two) and Kevin van Veen on target.

The Grecians come into the fixture following a defeat of their own as they were on the wrong side of a 4-0 scoreline at Cambridge United at the weekend. It was Exeter's first loss on the road in the campaign and only their second league defeat. Currently in fourth, the away side could go top if a succession of results go their way.

Manager Paul Hurst will welcome back Matthew Lund into the squad after he completed his three-match suspension following his sending off against Bradford City at the end of September.

Elsewhere, there's no fresh injury news, with the squad coming through the encounter at Rodney Parade at the weekend, with Kevin van Veen, Jamie Ward and James Perch all playing some part of the game after injury and illness, while Jacob Bedeau also returned to the bench following a calf injury.

However, Hurst confirmed Kgosi Ntlhe will continue to miss out with a groin issue.

Jordan Hallam (ankle) is close to a return and will feature for the Under-23s at Bottesford next Wednesday all being well, while John McAtee (shoulder) looks for a quicker return and also may play some part in that encounter.

George Miller (quad strain), and Andy Dales (calf) remain absent, while Jordan Clarke is out following an appendix operation, although the latter two were both back on grass running on Monday.

United gained promotion to League One the last time the two sides met, despite it being the end of a 28-game unbeaten run at St James Park.

Scunthorpe United picked up three valuable points against Exeter City at The Sands Venue Stadium on Tuesday evening, courtesy of a 3-1 victory.

In an entertaining first-half, United twice led. First, James Perch fired in a wonderful strike to make it 1-0, only for the visitors to square things up through Matt Jay. However, before the interval Scunthorpe's led once again, when Jamie Ward smashed home from within the box to make it 2-1. In the second period, the Iron then added a layer of gloss to the scoreline when Alex Gilliead bundled home with around fifteen remaining.
The Iron had entered the match having made three changes from the team which took on Newport County on Saturday. Sutton, Gilliead and Proctor moved to the bench, with Lund, Ward and van Veen preferred on a chilly October night in North Lincolnshire.

That meant a team of Watson in between the sticks with a back four of Brown, McArdle, McGahey and Perch. In midfield, Colclough, Lund, Songo'o and Ward were deployed with van Veen and Novak leading the attack.
In a gripping opening under the floodlights, there was plenty of action to take in. Exeter first won a corner which Scunthorpe cleared; before van Veen probed forward but under pressure was unable to find the final ball to unlock the defence.
Within a minute of this, McGahey was booked for a foul in the middle of the park after the ball had bobbled up awkwardly beneath his feet. Undeterred, United continued to show attacking intent as Ward looped a ball in which drifted tantalisingly across the six-yard box cross. van Veen's shot was then pushed away to win a corner which came to nothing, as the game continued to race to life.
Yann Songo'o then found himself in the referee's notebook for a tactical foul on Ryan Bowman - and fifteen minutes had soon gone with the score still balanced at 0-0. Each goalkeeper had yet to have a truly testing save to make as things settled into a more attritional midfield battle.
Testament to this developing pattern, the next moment of note was when Nigel Atangana entered the notebook for bringing down Jamie Ward. He had been progressing threateningly up the wing after United had cleverly played out a goal-kick via Junior Brown.
Then, in the twenty-fourth minute, Scunthorpe managed to remove the shackles to take the lead on the night. James Perch - forward from right-back - tried his luck from about twenty-five yards to fire spectacularly into the top-left corner despite the desperate efforts of Jon Maxted in the Exeter goal.
But the lead was short lived. Three minutes later the Grecians drew themselves level. Matt Jay charged into the area, firing hard and low past Rory Watson after some neat football by the visitors.

Ten minutes of play then ensued during which Scunthorpe saw more of the ball, but were unable to carve out anything of note within. Exeter seemed happy to sit back and absorb the pressure.
But that all changed in the thirty-seventh minute as the Iron regained the lead through the lively Jamie Ward. After a bit of a scramble in the box, Novak managed to assume control and knock the ball into the path of McArdle, who in turn nodded it towards Ward - who did the rest with his powerful strike.

A couple of minutes before the interval Scunthorpe survived a mild scare when the visitors swung in a corner which evaded everyone. Yet happily for United, nobody in red and white was lurking at the back-post to take advantage of the situation.
In added time, the Devon side had one last chance when they won a free-kick on the edge of the box, just to the left of the goal. Jay placed it towards the top-left corner, and it required a Rory Watson save to keep United's noses in front at the break.
Therefore, when the referee's whistle blew to signal the end of the half, Scunthorpe led 2-1.
At the beginning of the second period, Exeter came out with the clear intent to try and get an early leveler - forcing United to defend out the first few minutes. Four minutes in, Ben Seymour wriggled into the area yet despite making space for a shot, the angle was against him and all he could do was find the side-netting.
Matt Jay and Ryan Bowman then linked up well in the fifty-fourth minute. Unfortunately for them, the latter could only smash against the outside of the post after their one-two had made a reasonable amount of space in the area.
With an hour on the clock it remained 2-1, but with Scunthorpe now looking livelier again. Exeter, therefore, decided to make their first change of the day - replacing Atangana with Nicky Law in the aftermath of Kevin van Veen pirouetting his man in the area an prodding an effort over the bar with the angle against him.
But the change had no immediate impact, as Scunthorpe came close to extending their lead once more just a few passages of play later. Yann Songo'o showed fantastic vision in midfield to loft a ball in behind for Novak to attack - and his half-volley was only kept out by an excellent save from Jon Maxted.
Randell Williams was then introduced for the visiting side with just over twenty minutes to play, taking the place of Jack Sparkes. Almost simultaneously, Scunthorpe swapped Jamie Ward for Alex Gilliead.
For Paul Hurst, it was a change that quickly paid dividends, as it took Gilliead only five minutes to add a third goal for the Iron. The winger sprinted in at the back post to bundle home a Ryan Colclough cross, after Colclough had progressed trickily up the wing and delivered an inviting ball across goal.
Just inside the final ten minutes, Exeter manager Matt Taylor made his final switch of the day, replacing Ben Seymour with Jake Taylor.
But in reality the game was settled by this point. Exeter nor Scunthorpe managed to create nothing of real note in the final ten minutes, as the game slipped from the away side's grasp. In one last change, the Iron replaced Lee Novak with Levi Sutton.
As the final whistle blew, United were greeted by appreciative roars and a generous round of applause from their fans - reward for a solid home victory.
IRON: Watson, Lund, Songo'o, Colclough, van Veen (Proctor, 76), Ward (Gilliead, 73), Perch, Novak (Sutton, 88), McArdle, McGahey, Brown.
IRON SUBS: Eastwood, Butler, Slater, Eisa.
ATTENDANCE: 3,055
SPONSORS MAN OF THE MATCH: Lee Novak
IRON BAR MAN OF THE MATCH: James Perch

Save money by purchasing your Iron v Exeter City tickets in advance! Tickets are on sale now for the home clash. 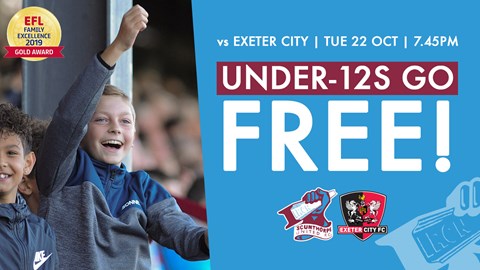 Our Early Bird Price Rates have been frozen for the sixth season in succession, and supporters can buy at these prices until the ticket office closes at 5pm on Monday, October 21st, and also until three hours before kick-off online via our ticketing website (www.sufctickets.com). Matchday prices then apply.

PAY ON THE GATE: Iron fans can pay cash on the gate for Turnstiles 2A and 2B of the Britcon Stand, and Turnstile 4A in the East Stand. Please note, full matchday prices apply.

United's encounter against the Grecians is a Category B fixture. 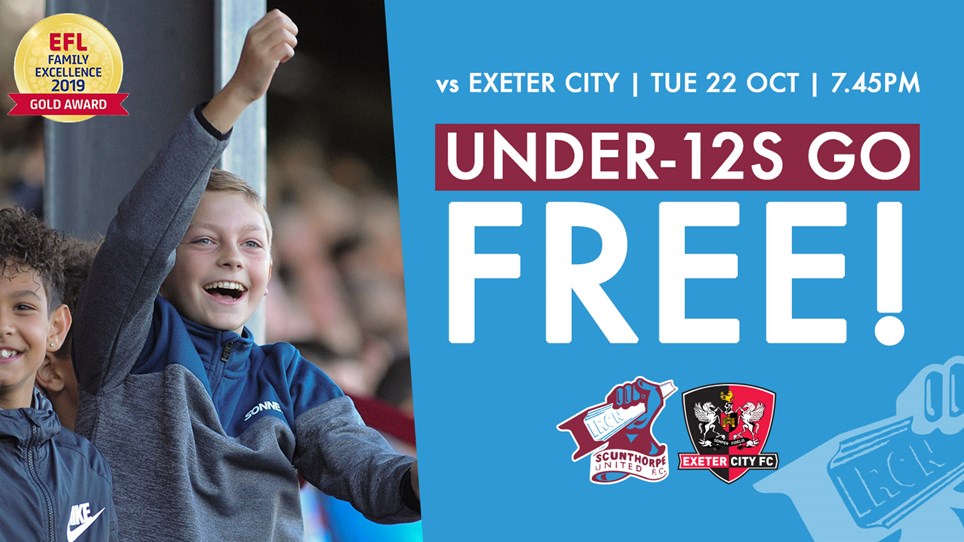 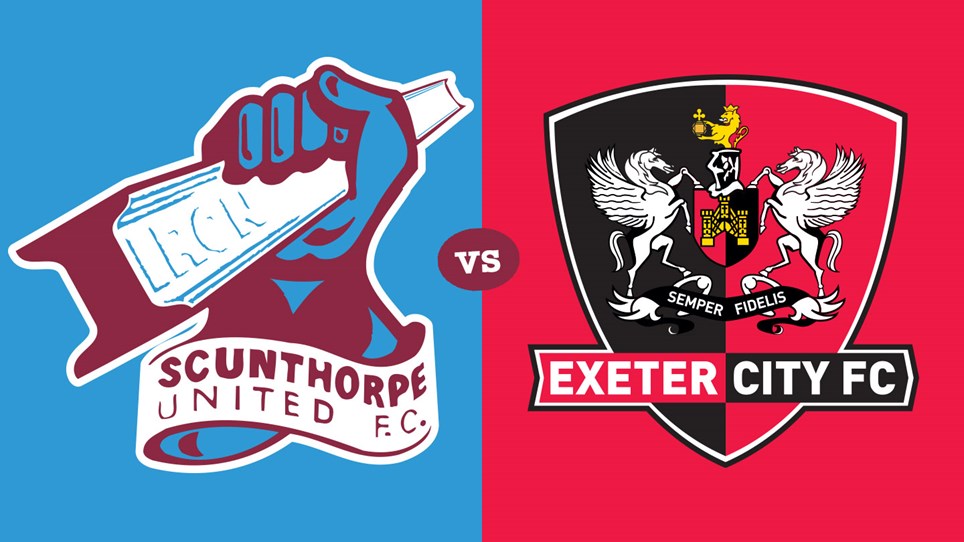 
Save money by purchasing your Iron v Exeter City tickets in advance! Tickets are on sale now for the home clash.