The Iron return to League Two action on Saturday when they make the trip to take on Bradford City at the Utilita Energy Stadium (3pm kick-off).

Our last game saw the Iron defeated 2-1 by Newport County at the Sands Venue Stadium, in a game which saw Abo Eisa on target and Lee Novak sent off.

It was a result which left Scunthorpe sitting 15th in League Two, but victory at the weekend could take the side up to 11th in the table.

Bradford sit sixth going into the weekend, and were defeated 2-1 at Crawley Town in their last game, with substitute Aramide Oteh pulling a goal back late on.

Click here for the latest team news from manager Paul Hurst ahead of the game.

The two sides met in North Lincolnshire back at the end of September, with Jamie Ward on target from the penalty spot in a 1-1 draw during which Scunthorpe played more than 75 minutes with ten men following Matthew Lund’s red card.

Alex Gilliead, facing his former club, and a first league goal for John McAtee helped secure a spirited 2-2 draw at Bradford City, as the Iron came from behind.

Hope Akpan and James Vaughan fired the hosts into the lead, but Paul Hurst’s side hit back to claim a point at the Utilita Energy Stadium.

United looked to start well, and Abo Eisa forced an early clearance as he linked up with Junior Brown on the left before sending a dangerous low cross into the box which was turned away by the Bantams.

The Iron then won a corner as James Perch’s deep ball into the box, aimed for Miller, was flicked behind by a Bantams player. Gilliead’s delivery looked for Bedeau but the hosts managed to clear.

The first attempt at goal came in the seventh minute as Brown whipped in a cross from the left, which Gilliead connected with centrally in the area, but sent just wide.

Soon after, Miller, facing his former club, stole possession and advanced forwards before drilling an effort wide of the goalkeeper’s bottom right-hand post.

He came close again with 10 minutes on the clock, latching on to Rory Watson’s goal kick, and catching the hosts out by getting between the two central defenders. However, his shot was pushed wide for a corner by the home goalkeeper.

With a quarter of an hour gone, James Vaughan hit the foot of the post for Bradford as he was played a square ball by Matt Palmer after he found space on the right side of the area.

On 18 minutes, Hope Akpan broke the deadlock for the hosts as he slotted across goal after being slipped into the area on the left. Jordan Clarke pulled up with an injury and came off for treatment, before later being replaced by Ntlhe.

Just a minute later, it was two for the hosts as play was spread to the left, with the cross into the area turned home by Bantams skipper Vaughan.

After Vaughan was yellow carded for a late tackle on Matthew Lund, McAtee floated in the resultant free-kick, with Perch winning the header. He powered it goalwards but McGee just about held onto it.

Then, at the other end, Watson denied Vaughan from point blank range following a header, with the Iron then able to clear the ball as it rebounded back into the penalty area.

There was then patient build-up from the Iron down the right as Gilliead and Ntlhe linked up to send the ball to meet the run of McAtee, but the cross couldn’t find an Iron player.

Then, handball shouts were ignored as Ntlhe strode out of defence. Lund played to Eisa, who looked to drive down the left, but the ball was cleared for a throw.

With 34 minutes played, Gilliead picked up the ball, turned onto his left foot and fired across goal, with the ball driving through the bodies, nestling into the far bottom corner of the net for his fifth goal of the season.

Just four minutes later, there was a big chance for the Iron as McAtee drove forward and picked out Miller. He found Lund on the edge of the box, with his cross meeting the run of Gilliead. He put the ball across the area with Miller heading goalwards but for a tremendous save by Luke McGee.

Miller proved a nuisance to the Bantams back line again three minutes before the break, as he put the hosts under pressure from an aerial ball before putting his body in the way as McGee came to gather. The ball dropped, but there was no Iron player running in.

Gilliead and McAtee combined well early in the second half before McAtee rolled a ball across the area which just missed the run of Miller.

Perch then sent in an inviting cross which went between the two central defenders, with McGee producing a flying punch to get the danger away.

Soon after, Brown swung in a cross from the left which Perch tried to connect but just failed to get on the end of, and had to receive treatment after colliding with the goalkeeper.

On the break, the hosts attacked through Callum Cooke, as he was played in by Connor Wood but Brown pulled off a block to deflect the shot wide for a corner.

United continued to threaten and Perch sent the ball wide of the goalkeeper’s left-hand post with a drilled effort after Eisa played the ball back to him.

Gilliead then charged down the right, with a powerful cross seeing McGee flap, before a looping ball dropped for McAtee, with his header going over the bar.

Ntlhe, who had minutes earlier received treatment, was replaced by Ryan Colclough on 57 minutes, with Gilliead reverting to right-back.

With an hour gone, Eisa danced into the area from the left following good work from Perch, but despite rolling the ball across goal, he was penalised for a foul on a defender who ended up on the floor.

With around 20 minutes left, Perch did a lot of hard work before the ball was rolled to Colclough. Possession stayed with the Iron before Eisa opened into space on the left, with his low effort saved by McGee.

On 73 minutes, Scunthorpe levelled as McAtee drove forward and fired a low effort across and beyond the dive of McGee, and into the corner of the net for his first ever league goal.

Moments later, Miller controlled and turned on the edge of the box and swung a boot but didn’t get the best connection as McGee saved.

Ten minutes before the end, McAtee’s corner was floated to Eisa on the edge of the box, but his volley was saved by McGee.

Not long after that, Miller was replaced by Alfie Beestin for his Iron debut and received a standing ovation from the away support after working tirelessly up front.

On the turn after being teed up following a Colclough corner, Beestin almost made it a debut to remember too, as he turned and fired in a shot that McGee had to get down to save.

The hosts broke during the second minute out of six in stoppage time, but the league’s top scorer Eoin Doyle blazed the ball over the crossbar.

Lund sent a late cross in from the right, but McGee caught just under his crossbar as the game ended all square.

Iron fans can pay on the gate at Bradford City on Saturday, January 18th (3pm kick-off).

Our fans will be located in the East Stand on Midland Road.

PAY ON THE GATE: There will be a pay on the gate option, cash only. The only price increase is for adults, these go up to £25, all other price bands remain the same. Any fans paying on the day need to go the away end turnstiles on Midland Road at the bottom of Holywell Ash Lane.

*All students must be in full-time education, with valid student ID. 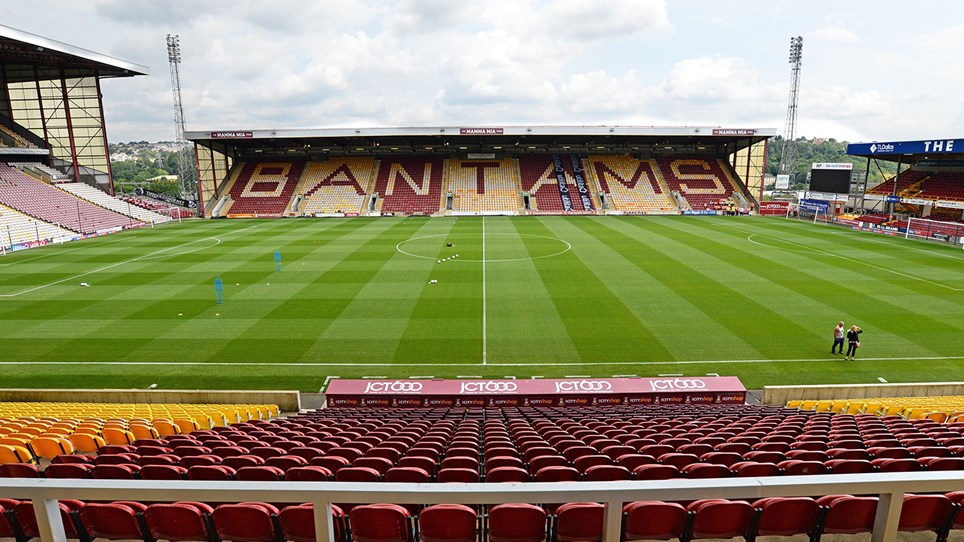 Tickets go on sale for Bradford away game