The Iron return to action at the Sands Venue Stadium this Saturday as they play host to Crawley Town in Sky Bet League Two (3pm kick-off).

This weekend’s match will see Crawley Town come into the match following consective victories in league and cup. They beat Salford City last weekend 2-0 in their first home game of the season before overhauling Walsall in midweek in round one of the Carabao Cup. Contrastingly, the Iron were beaten in both of their corresponding encounters, but come into the match following a much-improved performance and only a slender 1-0 defeat to Championship opposition Derby County.

Iron boss Paul Hurst confirmed to the press ahead of the game that striker Lee Novak will miss the encounter as they wait for news on an ankle injury which forced him off during the first half on Saturday.

Meanwhile, James Perch misses out through the final match of a three-game suspension that came after picking up his 15th booking of the season on the final day of last season at Plymouth Argyle.

Kyle Wootton will be assessed ahead of the game after suffering with concussion last weekend, while Jordan Clarke is likely to miss out following a quad injury.

Elsewhere, Andy Dales (hamstring), Clayton Lewis (thigh), Levi Sutton (knee ligaments) and Lewis Butroid (ankle) are out of contention due to injuries picked up in pre-season.

Opposition manager Gabriele Cioffi wants his team to continue their attacking threat as they top the shooting charts in the whole of the EFL.

Five different players have already scored in the Red Devils' three matches so far with Bez Lubala, Nathan Ferguson, Tom Dallison and Ashley Nadesan all notching their first goals for the Reds in the first two weeks of the season.

Cioffi said: "We know one of our problems last season was not being ruthless enough in front of goal. It is something we have worked very hard on during pre-season. So far we have scored six goals and I read somewhere that we have already created 50 shots on goal in two games, more than any side in the EFL.

"We want this to continue, to be an offensive team because we know it also makes the fans happy when they see us playing on the front foot."

The last time that the two sides have met was in April 2015, when the Iron ran out 2-1 winners.

Paddy Madden steered home the winner into the top corner of the net from close range, while Jordan Clarke's driven effort across goal took a wicked deflection to wrongfoot the 'keeper for the opener.

Rory McArdle and Matthew Lund scored the goals, and Rory Watson saved from a spot kick, as the Iron drew 2-2 against Crawley Town at the Sands Venue Stadium.

The match got off to an electric start, as the visiting team’s dynamic forward Ashley Nadesan got in behind the Iron defence, drawing an outstanding point blank save out of Watson, who forced the ball behind for a corner.

A few minutes later, Adam Hammill beat his man down the left wing, and his dangerous cross was deflected behind for a corner which was eventually cleared by the away side.

However, it was Crawley who opened the scoring in the 15th minute, as Josh Dacres-Cagley laid the ball off to Bez Lubala from a free kick. The latter rifled home just inside the box, as they looked to continue their great start to the season.

Moments later, the Iron almost equalised through Matthew Lund, as the midfielder weaved his way through the opposition box before digging out a low, left-footed strike that goalkeeper Glenn Morris just about saved with his trailing leg.

Nadesan was again causing United problems with his pace and direct running, but this time Rory McArdle did well to keep up with the forward and usher him into touch.

Around the 27th minute, the Iron enjoyed a sustained period of pressure. Harrison McGahey whipped a cross to the back post for Lund, the ball bounced around the box but didn’t quite fall to a United player.

Shortly after, Lund headed wide to Hammill who cut onto his left, his delivery was perfect and Kyle Wootton headed narrowly over from close range.

The home side continued to push for a goal, with debutant Abo Eisa winning a free kick in a dangerous position out wide. Hammill’s first ball in was cleared back to him, but the winger sent a deep cross to the back post, and there were huge shouts for a penalty after Andy Butler was dragged down, but the referee waved the claims away.

The Iron were up in arms again moments later, after Hammill was bundled over in the box and nothing was given. However, from the resulting corner, McArdle’s pinpoint header into the top corner - from a Hammill delivery - levelled things up in the 32nd minute.

After the deserved equaliser, there was a clash of heads between goalscorer McArdle and Iron ‘keeper Watson, who were down for a while, but recovered and were okay to continue, and the whistle was blown for half-time soon after.

The away side made a double substitution at the break, in a bid to bring a halt to the Iron’s dominance towards the end of the first half.

However, it did little to deter the home side in the early stages of the second period. Hammill and Nthle combined down the left side to win a corner, it was played short, and Hammill whipped a deep cross towards Butler who was being held in the box and coincidently couldn’t meet the delivery.

In the 51st minute, the away side had a great chance to retake the lead through Nadesan and Ollie Palmer. Left-back Josh Doherty sent a dangerous cross in Nadesan’s direction, but the striker’s header was saved superbly by Watson. The rebound fell to Palmer, but the substitute fired wide on the edge of the six-yard box.

Just three minutes later, the Iron took the lead through Lund. After a cross from Adam Hammill, the ball was half-cleared to Lund, and his stunning half-volley flew into the top corner from 20-yards out.

In the 60th minute, Hammill’s audacious 35-yard free kick almost caught out Morris in the Crawley goal, who fumbled the powerful drive. Moments later, Butler’s header at the back post almost made it three, as the Iron pushed for a two-goal cushion.

After a rare period of quiet for the following ten minutes, Filipe Morais stood over a free-kick in a dangerous position, and the set-piece specialist’s strike curled narrowly past Watson’s right post.

This proved to be a warning sign from the away side, as moments later in the 75th minute, Dacres-Cagley’s got a second bite of the cherry following his corner. The delivery found Nathan Ferguson who glanced home at the near post.

Just four minutes later, Watson pulled off an incredible save following a Crawley penalty. The Iron stopper got down well to his right-hand side to divert the spot kick from Lubala away to safety. Soon after, Watson was the hero once again, getting down low to force Reece Grego-Cox’s drive away from danger.

In the 83rd minute, Bez Lubala’s strike looked destined for the bottom corner but the Iron had their ‘keeper to thank again, as he expertly tipped the effort onto the post and the ball was then cleared.

After an end-to-end second half, the referee’s final whistle was blown and the Iron had to settle for a point.

Save money by purchasing your Iron v Crawley Town tickets in advance! Tickets are on sale now for the home clash.

Our Early Bird Price Rates have been frozen for the sixth season in succession, and supporters can buy at these prices until the ticket office closes at 5pm on Friday, August 16th, and also until three hours before kick-off online via our ticketing website (www.sufctickets.com). Matchday prices then apply.

United's encounter against the Red Devils is a Category B fixture. 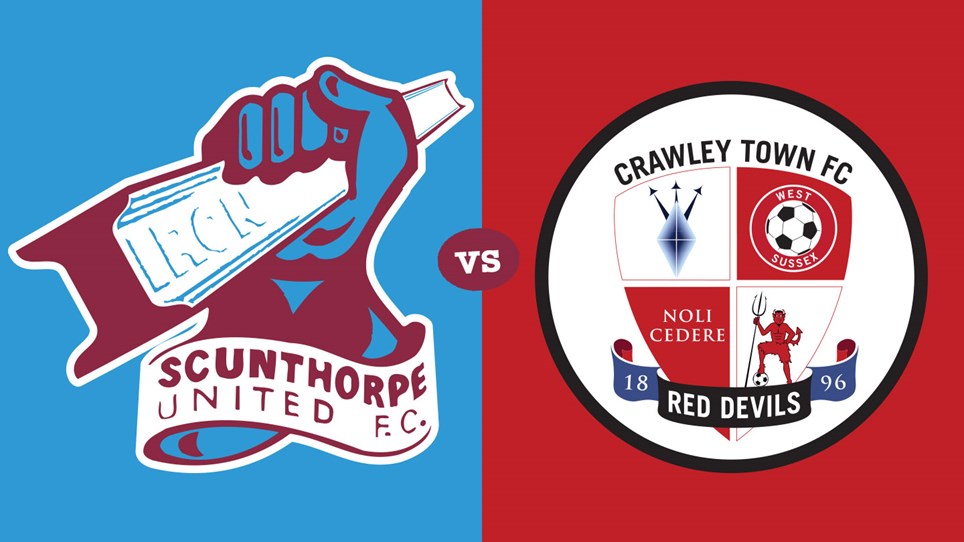 Tickets go on sale for Crawley home clash - save by buying in advance!


Save money by purchasing your Iron v Crawley Town tickets in advance! Tickets are on sale now for the home clash.