The Iron return to action at the Sands Venue Stadium this Saturday as they play host to Carlisle United in Sky Bet League Two (3pm kick-off).

United will be looking for their first three points of the season as they face the Cumbrians, who sit three places above them in 21st position in League One.

Steven Pressley’s side were beaten in the Carabao Cup second round by Rochdale in midweek, losing 2-1. In the league, their last fixture saw them draw 2-2 at home to Salford City.

Kevin van Veen (knee) has trained all week so could be in contention for a place in the squad, but Paul Hurst confirmed in his pre-match press conference that there were a couple of fresh injury concerns for two unnamed players.

James Perch serves the second match of a three-game suspension so misses out, while Lee Novak (ankle) remains absent for the next month or so.

Meanwhile, Ryan Colclough (groin) will be assessed in training after playing 90 minutes for the Under-23s in midweek, as will Jacob Bedeau, who is coming back from a knee injury.

Speaking ahead of the game, Carlisle boss Steven Pressley said: "This is another game where we are coming up against a side who will try to play their football at what is a very tight ground.

"They've tightened things up defensively recently and there is no doubt they'll be looking for a turnaround in results as quickly as possible.

"League positions don't mean too much at this stage of the season, other than they show those sides who have found a bit of consistency. That's what both ourselves and Scunthorpe are looking for just now.

"The good thing for us is that we know we aren't too far away. Some of the football we're playing is fantastic, and it's now about eradicating the errors we've been making in our final third and converting the very good chances we're creating into goals.

"It's a game for us to look forward to. We know our fans will be there in numbers again, as they always are, so it's about giving them a positive result and another good performance to cheer."

The first chance of the game fell to the Iron in the seventh minute. Looking to make a positive start, Regan Slater delivered a free kick from near the corner flag, in the direction of Andy Butler. The captain headed back across the face of goal towards Yann Songo’o, but his header was cleared off the line.

Two minutes later, the Iron came forward again through Matthew Lund, but the central midfielder couldn’t keep his strike down, and the ball soared over the crossbar.

In the 13th minute, Jordan Clarke sent a right-wing cross to the back post, where Eisa was well-placed to head narrowly over the bar, with United pressing for the opener.

In the 21st minute, Slater stood over another set piece, this time from the left side. He floated a ball to the back post for Butler, but the big centre back couldn’t divert his header on target.

Ten minutes later, Gilliead and Miller linked up well down the right side, before the former sent in a teasing cross to the back post for Slater, who met it with a diving header that flew inches past the post.

38 minutes in, it was a similar story as Butler met another Slater delivery, but home goalkeeper Adam Collin gathered the ball down low.

On the stroke of half time, Miller was held down to the floor by Byron Webster, but the referee waved away the claims for a penalty. Abo Eisa picked up the loose ball only to see his shot deflected over the bar for a corner, which the away side cleared.

The Cumbrian’s made a half time substitution (Ryan Loft replacing Elias Sorensen) in an attempt to change the tide of the game, but it was the Iron who re-emerged on top after the break with a series of corners and sustained pressure.

In the 54th minute, Miller almost capitalised on a short back pass from Jack Iredale, the former charged down the keeper, but luckily for the away side, the ball bobbled away from danger.

Four minutes later, it was Rory McArdle on the end of Slater’s corner, but the centre-back couldn’t keep his header down.

Despite all the Iron’s pressure, it was Carlisle that broke the deadlock on the hour mark. The ball fell to Ryan Loft who drove towards goal, and rifled home at the near post. Appeals for a foul in the build-up were dismissed by referee Sam Purkiss.

Eight minutes later, the Iron felt hard-done-by again courtesy of the referee. This time, Gilliead looked to beat his man inside the away side’s box and was caught by Iredale, but the claims were again waved away.

Moments later, Abo Eisa’s strike was deflected behind for a corner and cleared. Carlisle countered and came close to extending their lead after a marauding run from Harry McKirdy, the forward played a one-two with Sagaf, but Watson was quick off his line to avert the danger.

In the 76th minute, the Iron took a corner from the left following good work from debutant Junior Brown, the ball fell to the edge of the box and Colclough looked to have been pushed, but play continued. Shortly after, Colclough checked inside onto his left from the right wing, and fired a low strike that was held well by Collin.

Six minutes later, the Iron came very close to an equaliser. Slater stood over the corner again, and his inch perfect delivery was met by the head of Lund, forcing a sublime, acrobatic save out of Collin.

The Iron applied the pressure in added time, with McArdle joining the attack and heading down for Eisa who couldn’t quite meet the ball, goalkeeper Adam Collin gathered. Moments later, Eisa curled a free kick towards the head of Colclough, but the latter couldn’t direct his header on target.

Save money by purchasing your Iron v Carlisle United tickets in advance! Tickets are on sale now for the clash against the Cumbrians.

Our Early Bird Price Rates have been frozen for the sixth season in succession, and supporters can buy at these prices until the ticket office closes at 5pm on Friday, August 30th, and also until three hours before kick-off online via our ticketing website (www.sufctickets.com). Matchday prices then apply.

PAY ON THE GATE: Iron fans can pay on the gate for Turnstiles 2A and 2B of the Britcon Stand, and Turnstile 4A in the East Stand. Please note, full matchday prices apply.

This game is a Category B fixture.

Saturday, August 31st - 9am-3pm (also open for a short period of time after the Carlisle game) 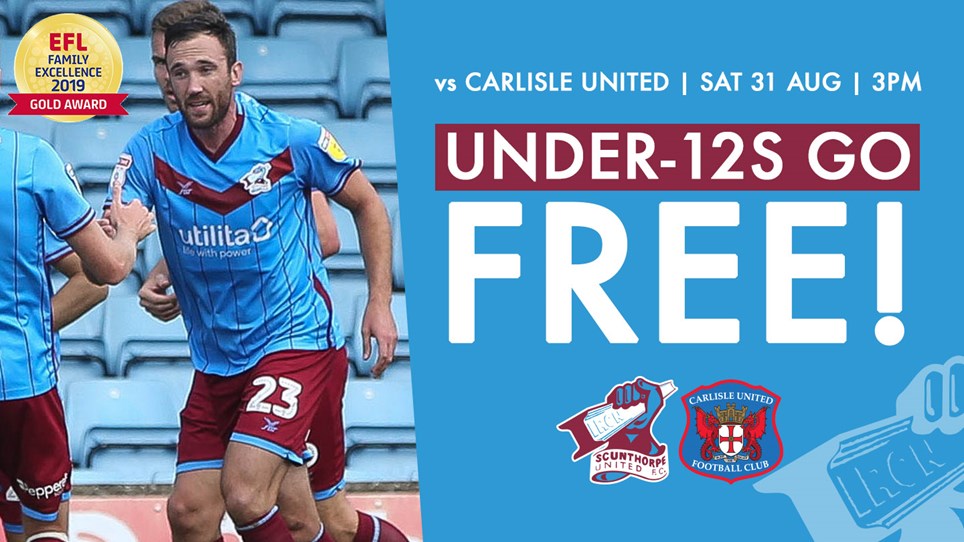