The Iron return to League One action with a home clash against Shrewsbury Town on Saturday (3pm kick-off).

Stuart McCall’s side enter the game buoyed by a 3-2 away victory at AFC Wimbledon last weekend, secured through goals from Josh Morris (2) and Ike Ugbo. It was our first league win since the opening day of the season at Coventry City.

Meanwhile, the Shrews picked up their first victory of the season, defeating Southend 2-0 at the New Meadow. Greg Docherty and Lee Angol scored the goals.

McCall says the Iron will wait on left-back Cameron Borthwick-Jackson, who has been tested by Manchester United’s medical staff this week after coming off with concussion during the first half of the victory at AFC Wimbledon. The mandatory 14 day rule for concussion no longer exists, with a series of assessments required now instead.

Rory McArdle has returned to training ahead of the fixture, after sitting out the last fortnight to allow the heel injury which has been troubling him since pre-season to heal.

The boss told the press there were concerns over the fitness of Ryan Colclough and Stephen Humphrys after both picked up knocks in training earlier in the week. Colclough returned to training on Thursday and it is hoped Humphrys will do so on Friday.

Jordan Clarke (hamstring) was set to return to full training on Friday, having trained lightly on Thursday, but Saturday's game may come too soon for him.

Clayton Lewis has suffered a groin strain and is out of contention for the next 7-10 days.

United were beaten 2-1 by Shrewsbury at Glanford Park in March, with the Shrews in play-off contention along with the Iron then. Josh Morris had given his side the lead through a wind-assisted free-kick.

A goalscorer last week, Greg Docherty has netted twice in five starts since signing on a season-long loan from Scottish giants Rangers.

The young midfielder featured 14 times in the second-half of last season for the Ibrox-based side, but ‘Gers manager Steven Gerrard felt it was important to get him some game time south of the border.

Docherty joined Rangers in January 2018 from Hamilton Academical, where he had spent the previous 13 years, coming through the youth set-up, before playing over 100 games for the club.

A box-to-box midfielder, Docherty has been capped by Scotland Under-21s.

ELSEWHERE IN LEAGUE ONE THIS SATURDAY…

Scunthorpe United claimed both their first home victory and first clean sheet of the league of season on Saturday when they defeated Shrewsbury Town 1-0 in Sky Bet League One at Glanford Park.

United were in control for large parts of the game, but it took them until the second half to navigate a way through the resolute Shrews defence. Lee Novak, however, proved to be the match-winner when he flicked a Josh Morris cross into the net in the 55th minute – a goal which the visitors could not muster up a response to.

The match itself began relatively slowly, and it wasn’t until around eight minutes in when anything resembling a chance occurred. The Iron won a corner on the right which was played for Lund to hit low towards goal from the edge of the box. It deflected away off a Shrewsbury leg.

Minutes later, James Perch found himself in the book for a series of fouls in quick succession which the referee took a dim view of. The right-back was soon back on his feet to block a near-post shot on the turn from Shaun Whalley with fifteen minutes gone, however.

Whalley himself was then the recipient of the second yellow card of the match on the 20 minute mark. His crime was nudging the ball away to prevent Scunthorpe from taking a quick free-kick, and his punishment was much to the amusement of the home crowd.

Both teams then had chances within a short period of time as the game started to open up. Oliver Norburn first saw his effort blocked from inside the Iron box, before United cleared the ball up to Lee Novak who guided a header into the path of Ike Ugbo. The striker confidently tried to flick the ball over the last man as he raced towards the area, yet was shielded from retaining it as it descended from the air.

With half an hour on the clock, the Iron were awarded a free-kick deep on the right which Josh Morris curled into the box, looking for the head of Lee Novak. A few seconds of uncertainty ensued, with the ball eventually been pushed into the path of Lund to hit just over from 20 yards.

A period of quiet followed for the next ten minutes – apart from a foul earning Luke Waterfall a booking - until half-time was very much on the horizon and Scunthorpe won another right-wing free-kick. This time it was level with the area, and Morris’ low ball crept through and across the six-yard box. Unfortunately, no claret and blue shirted player was able to get the required touch and the chance went begging.

As the fourth official held up his board to signal two minutes of added time, Shrewsbury won a corner which led to a comfortable save from Jak Alnwick when Whalley tried his luck from the area’s edge. United then went up the other end with the lively Ugbo drawing a strong double-save from Joel Coleman after he entered the area from the left.

The half-time whistle was to be blown with the score at 0-0, but before that there was just enough time for Oliver Norburn to become the fourth player to enter the referee’s notebook following a foul on the halfway line.

For the second half, orange-shirted Shrewsbury re-started play with neither manager having made any alterations during the break. However, it was Scunthorpe who did most of the pressing in the opening stages of the half - winning a couple of corners without making any concrete chances.

With just over 50 minutes played, Scunthorpe really tried to start turning the screw as Morris hooked the ball across goal from the byline with Colclough managing to tap it into the path of Ugbo. Unfortunately, the striker, couldn’t manage to get a shot away under intense scrutiny from the visiting defence.

Then, in the 55th minute, Lee Novak ensured that Scunthorpe’s encouraging start to the half was not destined to count for nothing. After a cross from Josh Morris, Novak threw himself towards the ball and got the contact to turn the ball beyond Joel Coleman in the Shrews goal.

Soon after, on the hour mark, the Iron had a stellar chance to add a second goal. After a momentary loss of concentration in the visiting defence, a sloppy pass-back intended for Coleman instead found Ugbo and had the striker in on goal. The striker took the time to compose himself before aiming his shot towards the far-corner - only for Joel Coleman to stand tall and make an excellent save.

With the clock starting to run down, Shrewsbury boss John Askey elected to make his first change with 25 minutes left as Aaron Amadi-Holloway was brought on for Anthony Grant. That was shortly after the Shrewsbury fans had been incensed not to be awarded a penalty following some alleged pulling going on in the box during a corner.

Scunthorpe again tried to extend their lead with seventy minutes played, as Funso Ojo ran the ball out of the Iron half before releasing Ryan Colclough on the right. The midfield man then cut inside and drilled a (saved) left-footed effort towards the near-post in what was to be his last act of the game: Andy Dales replaced him seconds later.

Ten minutes later, and on 80 minutes, Scunthorpe made their second change of the afternoon. Rory McArdle was introduced – and thrown straight in to defend a corner – with Lee Novak withdrawn. United saw the corner clear, still looking to be in relative control for the context. Indeed, Shrewsbury’s only chance of note in the preceding moments had been Whalley’s deflected effort which led to the corner.

As the match moved further towards its conclusion, Scunthorpe won another corner, but before it could be taken switched Ike Ugbo with Stephen Humphrys. Goode did his best to connect with Morris’ ball in from the corner, but the cross had just a little bit too much on it for the centre-back.

With 90 minutes played, the fourth official signalled that there would be five minutes of added time. Scunthorpe, who hadn’t looked truly threatened all afternoon, navigated their way through these in a relatively calm manner (apart from a booking to Lund for time wasting) to claim both their first home win and first clean sheet of the league season.

Next weekend, United return to action when they travel to the Pirelli Stadium to take on Burton Albion.

Save money by purchasing your Iron v Shrewsbury Town tickets in advance! Tickets are on sale now!

Our Early Bird Price Rates have been frozen for the fifth season in succession, and supporters can buy at these prices until the ticket office closes on Friday, September 21st at 5pm, and also until three hours before kick-off online via our ticketing website (www.sufctickets.com). Matchday prices then apply.

Fans using Turnstiles 2A and 2B of the Britcon Stand and Turnstile 5A of the Clugston Stand can pay on the gate. Please note, matchday prices will apply.

United's encounter against the Shrews is a Category B fixture. 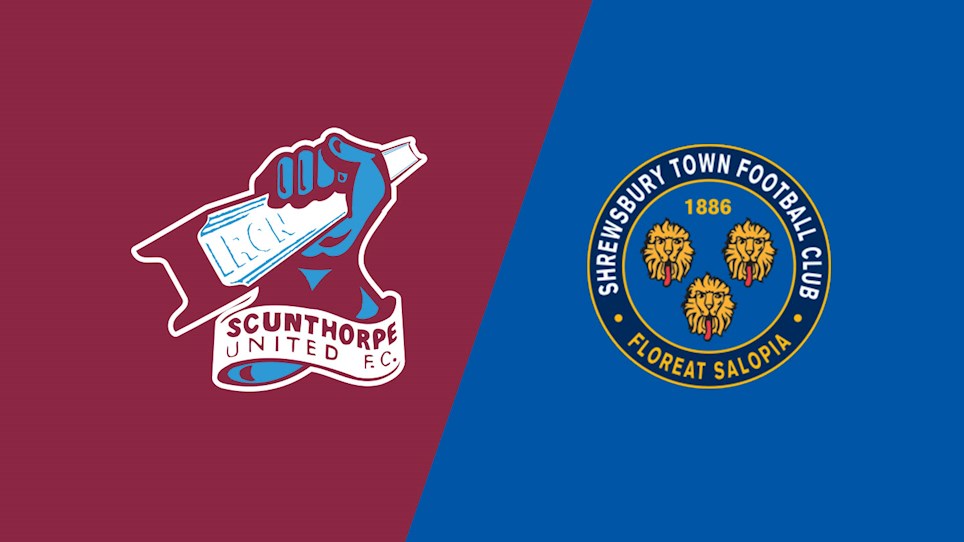 Advance saving! Save by buying your Iron v Shrewsbury Town tickets in advance


Save money by purchasing your Iron v Shrewsbury Town tickets in advance! Tickets are on sale now!