The Iron return to action with a trip to Blackpool this Tuesday, October 23rd (7.45pm kick-off).

United go into the match looking to bounce back from three successive league defeats against Luton Town, Peterborough United and Wycombe Wanderers respectively, while the Tangerines are unbeaten in ten league games and have only lost once in the division this season.

Speaking in his pre-match press conference, manager Stuart McCall confirmed forward Lee Novak will continue to sit out with a calf problem that saw him miss Saturday's encounter at Wycombe.

Full-backs Jordan Clarke and Cameron Borthwick-Jackson was fit to start at the weekend despite missing parts of last week with a virus.

Elsewhere, striker Ike Ugbo managed a substitute appearance at the weekend after returning from a hamstring injury and came through those minutes fine, while midfielder James Horsfield (groin) made the bench at the weekend.
Goalkeepers Matt Gilks (knee) and Rory Watson (arm) remain long-term absentees, while Matthew Lund (ankle ligaments) and Josh Morris (fractured jaw) are the latest additions to the injury list.
PAST MEETINGS...

The Iron were 3-2 victors the last time they went to Bloomfield Road on Boxing Day in 2017. Tom Hopper and Duane Holmes put the side into an early 2-0 lead before Hakeeb Adelakun made it 3-1 in the second half. Scunthorpe then withstood late pressure to hold onto all three points and their first win at Blackpool in 17 years.

He may be a defender, but Curtis Tilt is in a rich vein of form after netting in his last two games.

Tilt is also part of a sturdy defence for the Tangerines and has been involved in seven clean sheets already this campaign, along with his three strikes.

The 27-year-old has only netted at home this campaign, but they've come in wins against Bradford City and AFC Wimbledon and a draw against Rochdale.

He is a product of non-league having come through Halesowen and Hednesford before moving to Telford and then Wrexham. He would have a loan spell at Forest Green Rovers before Blackpool signed him in June 2017.

So far in his Blackpool career he's netted four goals in 56 appearances, with three of those goals coming in the last seven games.

Scunthorpe had chances to equalise throughout the game with Ryan Colclough and Stephen Humphrys both going closest, particularly in the second half.

Stuart McCall made a solitary change from Saturday’s 3-2 defeat at Wycombe Wanderers with Cameron Burgess coming into the starting eleven in place of George Thomas. With that change, Scunthorpe had skipper Rory McArdle sat just in front of the back four and behind the central midfielders of Funso Ojo and James Perch.

The Iron got the game underway, kicking away from the travelling supporters making the trip west for the evening, but it was the hosts who made the early advances with Cameron Borthwick-Jackson forced to clear a left-winged cross from under his own crossbar early on before a threaded ball through the middle just had too much weight on it to trouble the United backline.

The game’s first corner went to the Tangerines just before the 10-minute mark following a deflected cross from Michael Nottingham on the right. Jordan Thompson took the resultant kick, which saw Funso Ojo head clear. From the cross that followed though, Alnwick was forced to punch clear an inswinging cross which looked en route to goal, while moments later Michael Nottingham headed over the third cross into the Iron penalty area.

Fifteen minutes in, the Iron made their first real advances. Jordan Clarke put his head in for an aerial challenge which unleashed Andy Dales down the right. He coolly spun his man and drove down the right side of the area before crossing for Humphrys. After good defending, United won the ball back before winning a free-kick on the left side of the area. Borthwick-Jackson curled in the cross, with McArdle heading his effort wide of the target.

Three minutes later, the hosts took the lead with a brilliantly executed strike from Gnanduillet. He connected with a right-footed volley following a low left-winged cross from Jordan Thompson to send the ball into the bottom corner of the net.

Instantly, the Iron responded with Ojo feeding Borthwick-Jackson down the left. His low cross was cleared away from danger for a throw, but the Iron attacked again with Perch having a long-range effort tipped over the crossbar by Mark Howard. From the resultant corner, Scunthorpe came very close to equaliser with a goalbound header requiring a clearance off the line by a defender. McArdle then had two further bites of the cherry, first seeing his half volley cleared off the line before his second was blocked.

28 minutes on the clock and Scunthorpe were almost level once more. A brilliantly ball over the top from McArdle found Humphrys on the left. He exchanged passes with Ojo before cutting across the ball for a low show towards the corner which Howard did well to save, diving low to his left.

Ten minutes later, the hosts had their latest sighting of goal when Callum Guy danced around two attempted tackles before firing a left-footed shot goalwards from just outside the area. He saw his effort blocked by the body of Goode before Liam Feeney saw his follow-up sail over the bar.

On 40 minutes, the Iron created a swift counter-attack with Alnwick unleashing Dales down the right. He drove forward and played a one-two with Humphrys. The ball was spread to the left with Colclough who pushed into the area, cutting onto his left foot and seeing a powerful effort hit the side-netting.

Two minutes later, Gnanduillet forced Alnwick into a smart save to his right. The move was similar to that of his goal as he peeled away for a low left-winged cross, but his bobbling effort was pushed around the post by the Rangers loanee.

Both teams were unchanged going into the second half as Blackpool got the game back underway, but it was the Iron who started the half in a more positive fashion. Ojo and Borthwick-Jackson did well down the left to unleash Colclough, who drove into the area and saw his cutback cleared for a corner. From the resultant kick, Goode won the header and angled his effort goalwards, but Howard was equal to it and made a comfortable save.

On 51 minutes, Scunthorpe advanced again with McArdle spreading play to the left channel. The ball was fizzed across for Humphrys, who connected with the ball only to see his effort deflected wide for a corner. Colclough’s corner searched for McArdle, who rose highest, but his effort bounced wide of the post.

A minute later, at the other end, Guy forced Alnwick into his first save of the half when he exchanged passes with Thompson before angling a low effort towards the centre of the target.

The game became stretched ten minutes into the second half with Borthwick-Jackson driving out of the Scunthorpe penalty area before finding Dales on the right. He played through the advancing Perch who then cut back to Humphrys inside the penalty area, but the Fulham loanee was snuffed out. Moments later, it was Blackpool on the attack as a low left-winged cross towards the edge of the area found Thompson, but he sliced his first time shot well wide of the target.

59 minutes in, Colclough and Dales both combined on the right side of the area, with Colclough cutting onto his left and seeing his 20-yard shot deflect wide for a corner.

A minute later the Iron had their best opportunity for an equaliser. It looked as though the chance was gone following a heavy touch from Humphrys, but Colclough reignited the move to re-find the frontman, who then side-stepped his marker before drilling an effort across goal and narrowly wide from 20-yards.

62 minutes on the clock and United were forced into their first alteration with Ojo making way for James Horsfield after he and Blackpool’s Nottingham required treatment. He was able to continue, but the Seasiders made their first switch seconds later as Thompson was replaced by Mark Cullen.

Four minutes later and Howard was drawn into another stop. The ball ricocheted to Dales on the left, who cut inside and found Colclough. He found himself an angle in front of goal before his shot stung the palms of the Blackpool goalkeeper, who did well to hold onto the ball.

United made their second switch with 18 minutes remaining as Dales made way for George Thomas. Humphrys would have a half chance moments later as he got the right side of his man inside the area, only for a last-ditch tackle seeing the ball roll into Howard’s arms.

On 77 minutes, Cullen saw his left-footed cross from the left spin towards goal, with the ball bouncing off the top of the crossbar.

Just moments later, a quick throw-in from Clarke found Horsfield. The substitute re-found the full-back before slipping in Thomas. His powerful low cross just evaded Perch who made a darting run to slide in.

Blackpool made their second alteration of the game following that move with John O’Sullivan replacing Liam Feeney, while the Iron introduced Ike Ugbo for Burgess.

The Seasiders made their final switch with eight minutes to go when Harry Pritchard was introduced in the place of the goalscorer Gnanduillet.

It was that final substitute who had the game’s next chance as the clocked ticked towards the 90-minute mark. He cut onto his left foot from outside the box before seeing his curling effort skip off the surface and go just wide.

Five minutes of added time were indicated at the end of the game, but the Iron were unable to calve out a further clear cut chance as the game resulted in a 1-0 defeat.

Tickets are on sale for the Iron’s away trip to Blackpool on Tuesday, October 23rd. 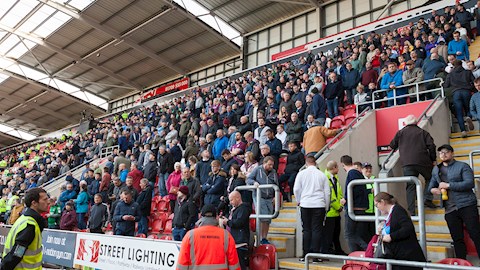 We have been handed an initial allocation of 400 tickets for the game at Bloomfield Road.

Fans are also able to pay on the day (CASH ONLY) at the away ticket booth from 6.30pm.


Tickets have gone on sale for the Iron’s away trip to Blackpool on Tuesday, October 23rd.