The Iron will be hoping to make it three wins in a row for the first time in the league this season, as they host Coventry City at Glanford Park on Saturday 5th January (3pm kick-off).

Stuart McCall’s side enter the game in good form, on the back of two successive victories against Wycombe and Peterborough, which made it the first back-to-back wins since October.

Scunthorpe came out 2-0 victors on New Year’s Day, with Lee Novak netting a brace. He scored a goal in each half to secure the three points against Peterborough United at the Abax Stadium.

Meanwhile, the Sky Blues themselves have been on a decent run of their own of late, winning their previous three matches. In their last game, they beat Wycombe 2-0. Conor Chaplin converted a penalty and Jonson Clarke-Harris netted in the second half to complete the win.

United boss Stuart McCall reported no fresh injury worries ahead of the game, though he provided updates on Jordan Clarke and Matthew Lund. Clarke faces four months out following an operation on a knee ligament injury, while Lund will be assessed next week as he looks to return from a knee problem.

Josh Morris faces two months out with a fractured fibula and strained ankle ligaments. Elsewhere, Matt Gilks (knee) and Rory Watson (arm) continue to miss out but are edging closer to a return, Ryan Colclough (knee) is out for the remainder of the season.

Kevin van Veen, Tony McMahon, Adam Hammill, Byron Webster and Harrison McGahey will all be hoping to make their first appearance since signing this week.

The Iron have a great record against this weekend’s opponents and are unbeaten in seven matches against the Sky Blues, having not lost a game since 2013.

The two sides have already met this season, having played each other on the opening day of the campaign back in August. On that occasion, the Iron were 2-1 winners, with Stephen Humphrys and Andy Dales netting on their debuts.

In the last meeting at Glanford Park, Scunthorpe were victorious again, beating Coventry 3-1 in April 2017 – a result which all but secured the Iron’s position in the play-offs that season.

Striker Jordy Hiwula is in good form for the Sky Blues, having netted in two of Coventry’s last three games.

The 24-year-old has five goals and one assist to his name this season and previously made a name for himself after starting his career on the books at Manchester City.

During his time at the Etihad, the attacker had two loan spells, one at Yeovil Town and the other with Walsall, before he decided to move away permanently to join Huddersfield Town in 2015.

After a tough spell at the John Smiths Stadium, which saw his chances limited and further loans with the likes of Wigan, Bradford and Fleetwood, Hiwula left the Terriers in 2018 and joined Coventry City in League One on a two-year deal.

The Iron made it three wins in a row and lifted themselves out of the relegation zone after beating Coventry City 2-1 at Glanford Park.

Midfielder James Perch found the bottom right corner via a deflection to give United the victory in the 67th minute.

Levi Sutton then scored his first ever professional goal with a lovely finish into the left of the goal.

With 12 minutes left, Coventry gained a goal back through Conor Chaplin.

After a busy week of transfers, manager Stuart McCall made one change from the team that beat Peterborough United 2-0 on New Year’s Day. Right-back Tony McMahon, who is on-loan from Oxford United, was given his debut in replace of Charlie Goode.

McMahon was involved in the Iron’s first attack of the match inside the opening three minutes. The ball was played wide right to the debutant, who whipped a dangerous cross into the area, which was glanced wide by Lee Novak.

Not long later, the Iron were on the attack again. A Levi Sutton cross from the left-hand side was only cleared to Perch on the edge of the box, but he bent his shot wide of the right post.

After winning his side a free-kick, George Thomas, who is a former Coventry player, opted to play the set-piece short to McMahon. The new signing set himself up to shoot from long distance, with goalkeeper Lee Burge making a comfortable save.

In the 18th minute, Coventry had their first sighting of goal. Jordan Shipley advanced forward with the ball and found Jordy Hiwula, who snatched at his shot with the ball flying wide of the target.

That chance didn’t disrupt the Iron’s rhythm when Novak chested down the ball for Perch to hit on the volley. His effort, however, deflected off a Coventry defender and bounced out for a corner-kick, which was cleared away by the visitors.

The Iron then had two chances in the 36th minute. Firstly, Novak laid the ball into the feet of Thomas, whose low attempt was parried by Burge, before United kept the attack alive with Kyle Wootton hitting a strike straight at the Coventry goalkeeper.

With five minutes left before half-time, Wootton then created another chance for himself. The striker shrugged off three Coventry players to bring the ball down, before turning and driving inside, but hit his left-footed shot just above the goal.

Two minutes later, Wootton was presented with another opportunity from a tight angle. His effort struck the side netting, but he initially did well to get the shot away after being crowded out by white shirts.

More good football after the break was on show from the Iron. McMahon’s cross from the right-hand side found its way through to Novak, who laid the ball back to Sutton, but his side-footed attempt went over the bar.

After a Coventry corner goes past a number of bodies, the loose ball was played to Luke Thomas, who came inside and drilled a shot wide of the right post.

In the 64th minute, neat one-touch football between Thomas, Funso Ojo and Cameron Borthwick-Jackson set the left-back free to cross. His delivery was perfectly placed for Novak, whose powerful header went wide.

Three minutes later, the Iron had their goal and went 1-0 up after Perch found the back of the net. The midfielder received the ball on the edge of the box and his shot took a deflection into the bottom right corner of the net, wrong-footing the Coventry goalkeeper.

Coventry then looked to hit back immediately after Jonson Clarke-Harris carried the ball inside and just hit his shot over the bar.

That didn’t stop the Iron in making it 2-0 not long after. Wootton did excellent in the area to square the ball to Sutton, who finessed the ball into the left corner of the net for his first ever professional goal.

However, in the 78th minute Coventry got one goal back. Jak Alnwick initially made a good save before Chaplin headed in the rebound.

As the clock ticked down, a series of Coventry corners looked to cause problems in the Iron penalty box, but Alnwick came out to gather possession safely from the second set-piece.

On 87 minutes, Kyle Wootton broke free and charged into the box on the right. He shot across goal, but Burge got down low to save and turn the effort behind for a corner.

There were six minutes of added time but Scunthorpe successfully saw the game out and held on for three points. They return to action with a trip to Walsall next Saturday.

Save money by purchasing your Iron v Coventry City tickets in advance! Tickets are on sale now!

Our Early Bird Price Rates have been frozen for the fifth season in succession, and supporters can buy at these prices until the ticket office closes on Friday, January 4th at 5pm, and also until three hours before kick-off online via our ticketing website (www.sufctickets.com). Matchday prices then apply.

Fans using Turnstiles 2A and 2B of the Britcon Stand, and Turnstile 4A of the Clugston Stand, can pay on the gate. Please note, matchday prices will apply.

United's encounter against the Sky Blues is a Category B fixture.

*Ticket office also open for a short period of time after the Coventry City home match. 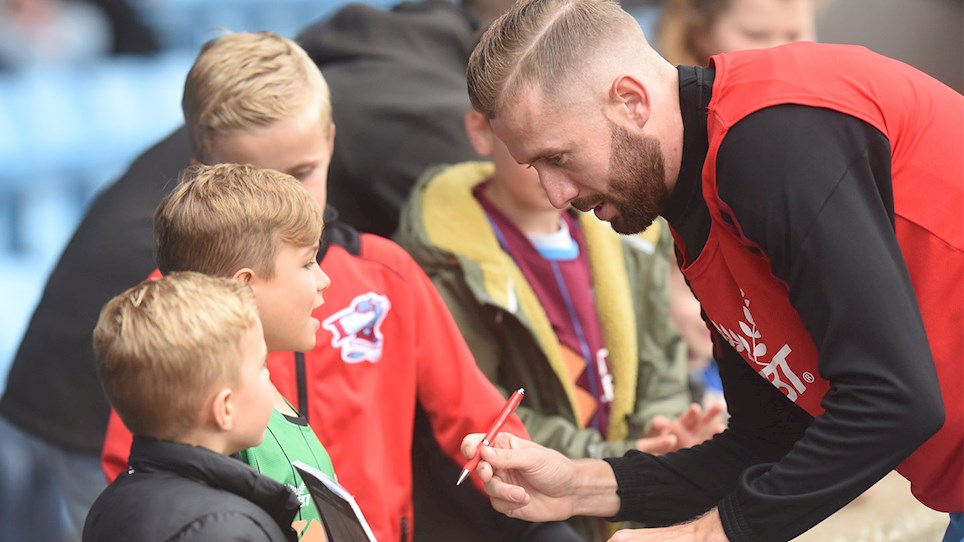 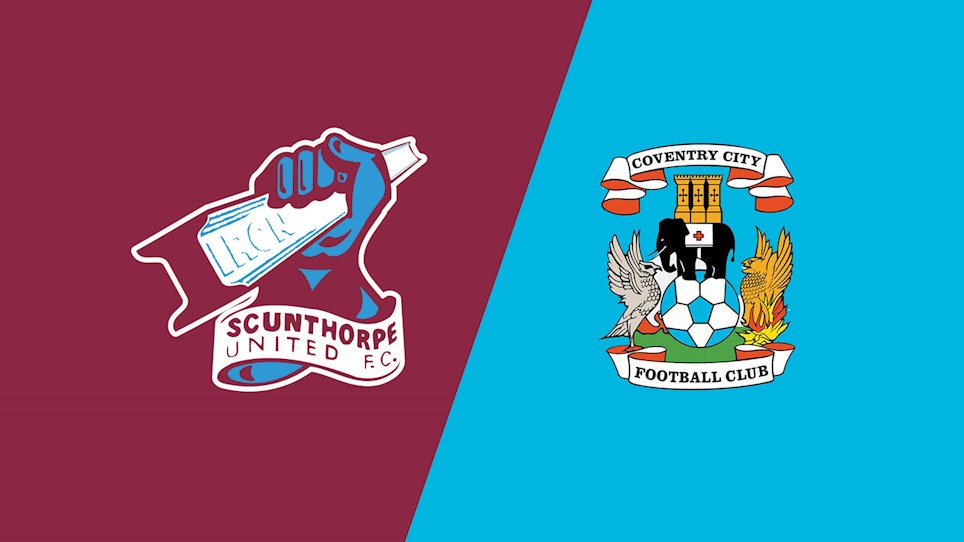 
Save money by purchasing your Iron v Coventry City tickets in advance! Tickets are on sale now!


Save money by purchasing your Iron v Coventry City tickets in advance! Tickets are on sale now!