The Iron will begin their 2018/19 Sky Bet League One campaign away at Coventry City on Saturday (kick-off 3.00pm).

Manager Nick Daws will be hoping his side can get off to the perfect start, but the newly promoted Sky Blues will also have aspirations of starting the season with three points.

The first of those players is set for a scan on Friday to establish whether he can step up his comeback, while the latter is recovering from a heel problem which ruled him out of the home friendly against Lincoln the previous week.

Funso Ojo and Duane Holmes have both returned to training but have missed parts of pre-season so will be assessed ahead of the game, with the long-term picture considered.

In terms of the opposition, Abu Ogogo has declared himself fit to make his Coventry debut against the Iron on Saturday.

The summer signing from Shrewsbury has seen his pre-season preparations disrupted by a thigh strain. However, Ogogo built on his half-hour run out against West Brom by featuring for the Under-23s this week to crank up his fitness levels.

United scored two late goals to beat Coventry 3-1 at Glanford Park on the final day of the 2016/17 season.

The away side took the lead, but Kevin van Veen pegged the Iron back level before Neal Bishop and Hakeeb Adelakun sealed the victory.

Last season’s top scorer Marc McNulty has left to join Championship side Reading so Coventry will be looking to Jonson Clark-Harris for goals this term.

Clarke-Harris came through the youth system at the club and became their youngest ever player to play in a first team match.

He then left in 2012 to sign for Peterborough United, before moving to Oldham Athletic and Rotherham United.

The forward re-joined Coventry on loan in January and then made the move permanent this summer.

The curtain was raised on the 2018/19 campaign as the Iron started with a bang, winning 2-1 against Coventry City on the opening day of the season at the Ricoh Arena on Saturday.

Two debut goals from new signings Stephen Humphrys and Andy Dales ensured that United won their opening game, getting a vital three points on the board early on in the season.

The home team got the ball rolling in 2018/19 and had the first attempt on goal in the opening exchanges when Michael Doyle picked it up and drove inside from the right. He unleashed a shot from outside the area but dragged it wide, failing to trouble Rory Watson in the United goal.

Coventry were again on the front foot moments later when a ball was threaded through on the left-hand side of the box but brilliant covering defending from Cameron Burgess stopped a shot heading goal-bound with a fine sliding tackle to win the ball.

The Iron soon got into the game and had their first effort of the day after 13 minutes through Lee Novak. Borthwick-Jackson robbed the Sky Blues of the ball and crossed into the area for the striker, who rose the highest in the area and connected well with his head, but the ball dropped just wide of the target.

It was a high tempo start to the 2018/19 campaign as both teams looked to attack. Burgess did well again to block a shot on goal when Jordy Hiwula was slid through on the Coventry right before the hosts won a free-kick. However, the Iron held firm once again to clear the danger.

City almost took the lead after 27 minutes when Tony Andreu found the run of Hiwula in the box, who fired his shot into the side netting. Moments later, United had a chance of their own when a corner was sent in towards the head of Novak. The ball cannoned back off the post before it hit Liam O’Brien and bounced behind for another corner.

The following attack saw the Iron hit the woodwork again through Burgess when a cross from Jordan Clarke on the right was floated towards Charlie Goode, but his initial shot was blocked. Burgess was there on the rebound but headed against the crossbar and Humphrys was tackled fairly as he looked to find space for a shot in the area.

A fine piece of goalkeeping from Watson in the 39th minute denied the hosts a goal when he dived to his left to keep out Andreu from distance as he turned the ball onto the post and behind for a corner. Coventry searched for an opening again when the following corner fell kindly to Max Biamou on the edge of the area, but his speculative overhead kick came to nothing.

Scunthorpe then called O’Brien into his first proper save of the match when Dales fired the ball towards goal, but the keeper did well to hold onto the ball.

Despite a whole host of chances in the first half, neither side could break the deadlock going into half-time.

As the Iron kicked off for the start of the second half, they looked bright and forced O’Brien into a flying save after 49 minutes. James Perch controlled the ball superbly on the edge of the box following a cross from Humphrys before volleying the ball sweetly, but O’Brien tipped it over the bar.

However, despite United starting well after the restart, it was Coventry who took the lead on the 52nd minute. Andreu curled the ball into the back of the net from a free-kick 25-yards out to put the hosts ahead.

The Sky Blues continued to look for another goal. They struck the post after 56 minutes when a corner found its way to Tom Bayliss, who hit the upright before the rebound was put wide of the target.

61 minutes in and the upright was shaking again when Abu Ogogo volleyed the ball from the edge of the area after Scunthorpe did well to clear the initial danger from the cross.

After 68 minutes, the Iron deservedly pulled level courtesy of new signing Humphrys. Substitute Lund won the ball back for United brilliantly before fellow substitute Duane Holmes fathomed a perfect weighted ball into the path of Humphrys. The striker drove into the box before lifting the ball over the keeper and into the net.

United turned the game on its head as they ramped up the heat in the second half and took the lead in the 81st minute through another debutant in the form of Dales. Funso Ojo pinged the ball to Humphrys, who won the header for Holmes to shield before Dales slammed the ball into the back of the net to put his team 2-1 up in the last ten minutes.

As the game headed into stoppage time, Coventry searched for an equalizer. However, two brilliant saves from Watson in quick succession denied the home team. Firstly, another Andreu free-kick was angled towards the corner of the goal, but he got across quickly to his right to parry the ball away. Then, a fine reaction stop kept the hosts out as Hiwula looked set to level the game and share the spoils.

However, the Iron did enough and held out to win 2-1 on the opening day after a stunning comeback from being a goal down early on in the second half. Scunthorpe play host to Walsall next Saturday at Glanford Park.

Iron fans can pay on the turnstile for the League One season opener at Coventry City on Saturday August 4th (3pm kick-off). 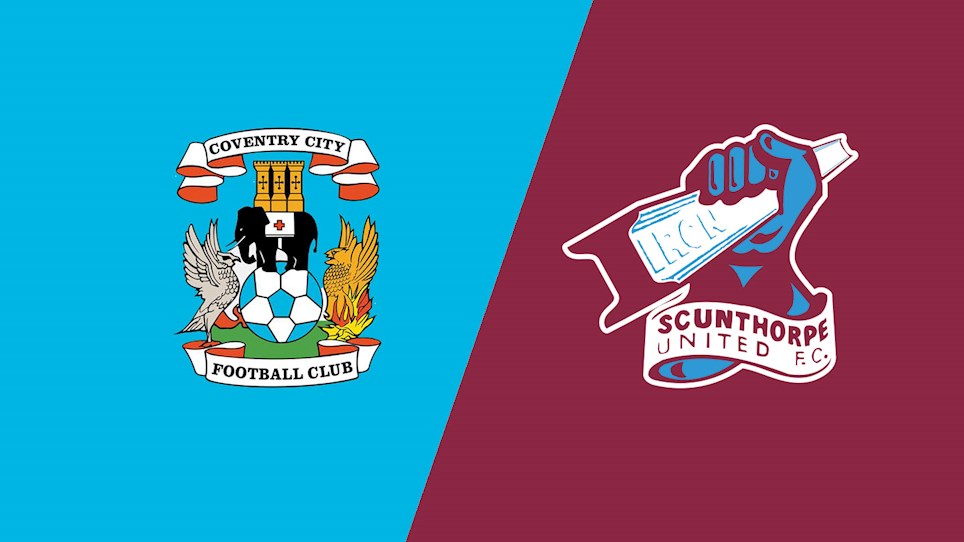 
Tickets have gone on sale for the Iron’s League One season opener away at Coventry City on Saturday, August 4th (3pm kick-off).