The Iron will be looking to do the league double over Shrewsbury Town this weekend when they travel to the New Meadow on Saturday afternoon in Sky Bet League One. (3pm kick-off).

Pay on the day at Shrewsbury Town

Last time out, we were narrowly beaten 2-1 by AFC Wimbledon at Glanford Park. Lee Novak pulled a goal back for United in the second half, after Jak Alnwick had previously saved a penalty, before James Hanson scored a brace to secure victory for the Dons.

As for Shrewsbury, they sit 15th in League One, after beating Southend United 2-0 at Roots Hall last Saturday. Fejiri Okenabirhie opened the scoring 50 minutes in, before Luke Waterfall then doubled the Shrews advantage midway through the second half. That victory saw Sam Ricketts' side win their second game in three matches.

A win over the Shrews would see Scunthorpe climb above them in the league table.

Caretaker manager Andy Dawson reported no fresh injury worries heading into the match, with Kevin van Veen shaking off a hamstring problem which forced him off early against AFC Wimbledon last week.

Josh Morris (fractured fibula and strained ankle ligaments), Matthew Lund and Jordan Clarke (both knee) are back on the training pitch but will still be out of action for an unspecified length of time as the medical staff continue to monitor them, though Dawson is hoping they will still have a part to play this season.

The Iron defeated Shrewsbury 1-0 in the league at Glanford Park earlier this season. Lee Novak scored the winner that day, and he will be hoping for a repeat of that this weekend.

Of Nigerian heritage, winger Fejiri Okenabirhie injects pace and power into the Shrewsbury side.

The 23-year-old attacker has scored 12 goals in all competitions this season and currently leads the way as the Shrews top scorer. He also has four assists to his name.

Okenabirhie started his career in the youth ranks at Arsenal before switching to Stevenage in 2014.

Since then, he dropped into non-league, playing for the likes of Harrow Borough and Dagenham & Redbridge where he really started making a name for himself.

The winger netted 19 times in 68 appearances, which earnt him a move to Shrewsbury in August. Now, Okenabirhie is a star man in Sam Ricketts' side and will be looking to add to his goalscoring tally again this weekend after notching in the last game.

The Iron have drawn 1-1 with Shrewsbury Town this afternoon at the New Meadow.

United took the lead in the first-half through a header from Kyle Wootton.

However, late on in the second period, a Shrewsbury cross from the right took a deflection off Adam Hammill and ended up in his own net.

Goalkeeper Jak Alnwick made a decent save in the opening five minutes when Shaun Whalley played Greg Docherty through on goal. Making the angle tighter, Alnwick blocked the low shot with his right foot.

The Iron then had their first big opportunity of the match. A free-kick was curled into the area by Tony McMahon, but neither Byron Webster or Lee Novak could strike the ball, as Jonathan Mitchell in the Salop net gathered it.

As the game had quietened down, United broke the deadlock in the 22nd minute to go 1-0 up. Right-back McMahon sent a perfect cross into the box, which Wootton and Luke Waterfall challenged for in the air and the Iron frontman sent the ball into the back of the net.

The hosts tried to get back into the match when a couple of deliveries got sot into the box. Omar Beckles had an initial shot blocked by McMahon, before Funso Ojo prodded the ball away.

However, Shrewsbury kept possession of the ball, as Whalley approached the area from the right side, but he dragged his effort wide of the left post.

Just before half-time, Docherty came inside from the left-wing to hit a shot goalwards, but it struck a blue and yellow shirt and diverted out for a goal-kick.

Dawson was then forced to make a first-half substitution, which saw an injured McMahon replaced by Harrison McGahey.

In stoppage time, Perch was then on defensive duties when he flung himself to the ground to block a central shot from James Bolton, with the ball spinning away for a corner.

From the set-piece, Beckles thought he had equalised for Shrewsbury, but standing on the post, Funso Ojo cleared the ball of the line.

After the interval, Whalley tried an ambitious effort from 30-yards out, but the ball flew well over the Iron’s goal.

Wootton had a chance to double the Iron’s lead in the 58th minute. Tom Pearce got to the byline and chipped a cross into the box, but Wootton’s header went wide of the target.

The hosts then won themselves a free-kick in a decent position, but Fejiri Okenabirhie lifted his dead-ball strike high into the stand.

In the 66th minute, Whalley curled a ball into the box from the right side and Aaron Amadi-Holloway saw his header comfortable held by Alnwick.

Striker Wootton had another chance for the Iron when he controlled a driven pass and quickly swivelled to hit it. However, it was blocked by a Shrewsbury defender and bounced out for a corner, which led to nothing.

For the second time in the match, an Iron player had to be taken off due to an injury. Clayton Lewis came on for left-back Pearce with 19 minutes left on the clock.

The Iron were prevented from scoring their second of their afternoon after Mitchell made a reaction save. Hammill drifted a deep free-kick into the box and, with his back to goal, Novak flicked it towards the net with his head, but Mitchell sprung off his feet to tip it over the crossbar.

A clever lobbed pass from Amadi-Holloway dropped to the feet of Tyrese Campbell for the hosts and from inside the box, he lashed a volley wide.

With six minutes left, Shrewsbury equalised to make it 1-1. A cross from the right side bounced in the area, and it unfortunately hit Hammill with the ball going into his own net.

Five extra minutes were played at the end of the game, but the two sides shared the points.

Pay on the day is available for Iron fans making the trip to Shrewsbury Town on Saturday, April 6th.

Away supporters can pay on the day CASH ONLY at the DM Recruitment Stand. Please note there are no card machines in or near the stadium, and there's no price increase on the day.

Tickets are now OFF SALE from the Glanford Park ticket office. 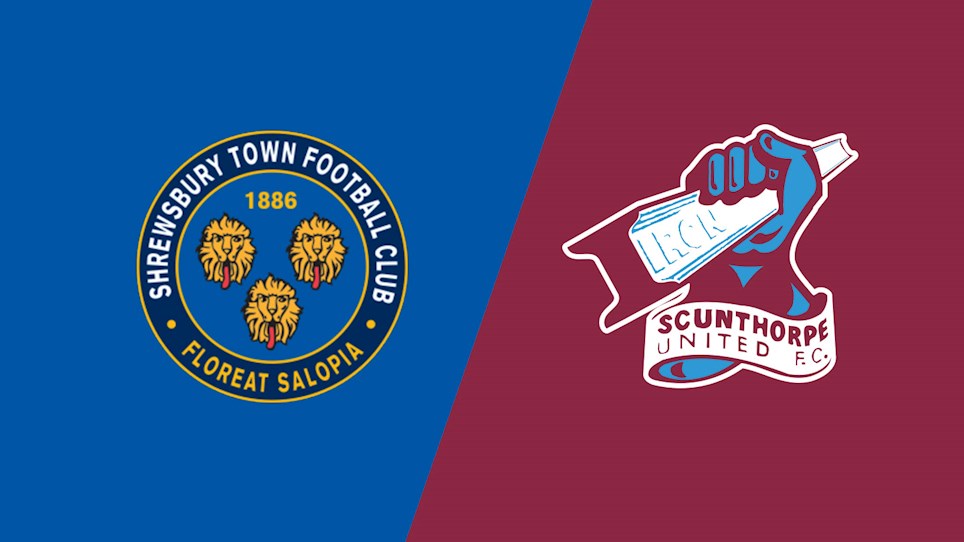 Shrewsbury Town away tickets on sale


Tickets have gone on sale for the Iron’s away trip to Shrewsbury Town on Saturday, April 6th.


Tickets have gone on sale for the Iron’s away trip to Shrewsbury Town on Saturday, April 6th.