The Iron return to action on Tuesday night, when they face Northampton Town in an FA Cup first round replay at Glanford Park (7.45pm kick-off). 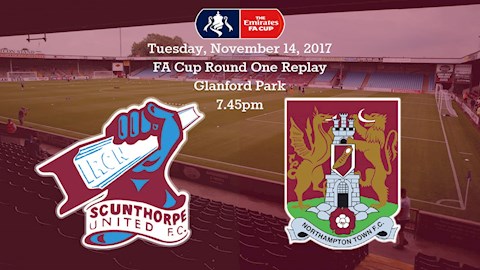 After a 0-0 draw at Sixfields ten days earlier, the two sides will battle it out again – with a second round trip to face Doncaster Rovers at the Keepmoat Stadium awaiting the victors.

It will be the second of three matches against the Cobblers in the space of a fortnight, with United taking them at Sixfields again in the league on Saturday.

TEAM NEWS…
Iron manager Graham Alexander says Josh Morris will be assessed, after coming off at half-time of the win against Bristol Rovers on Saturday due to a hamstring injury.

Fellow midfielder Andrew Crofts won’t be available though, after being called up for international duty by Wales.

However, defender/skipper Rory McArdle is back with the club after being on international duty with Northern Ireland and will be looked at by the coaching staff before a decision is made on his involvement.

Conor Townsend has had a full week of training following his hamstring injury, while Sam Mantom (groin), Luke Williams (hamstring) and Jonathon Margetts (knee) will continue to miss out.

LAST TIME OUT…
We drew 0-0 away at Northampton in the initial tie ten days ago. It was a game of few chances, but Scunthorpe almost won it late on when Cameron Burgess headed wide in the closing stages.

A superb goal from Hakeeb Adelakun saw the Iron defeat Northampton Town 1-0 and progress to the second round of the Emirates FA Cup. 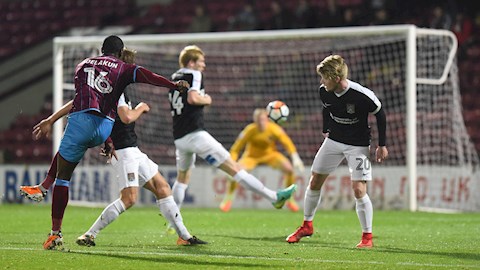 The winger netted during the first-half and sealed a second round tie away at Doncaster Rovers, which will be played on the weekend of December 2nd/3rd.

The Iron made two changes from the side that won 1-0 against Bristol Rovers at the weekend. Conor Townsend and Duane Holmes came into the side for Neal Bishop (suspended for one match) and Josh Morris.

United started brightly, with Hakeeb Adelakun having the first effort on three minutes following a Townsend cross. However, his shot was wide of the mark.

They had another chance one minute later, when Tom Hopper broke clear down the left and beat the onrushing goalkeeper to the ball. He put it across first time, but the ball was ushered away by the Cobblers back four.

The next opportunity arrived moments later, when Adelakun struck a cross-come-shot towards David Cornell’s top right-hand corner. However, the goalkeeper tipped it out for a corner.

In the 13th minute, Townsend drew a further stop from Cornell, as he controlled 30 yards from goal before striking towards the corner. The Cobblers ‘keeper got down well to save though.

The away team’s first chance of the evening arrived a minute later, and it was former Iron loanee Matt Crooks who drew Matt Gilks into a comfortable save after he struck a left-footed effort from the edge of the area.

With 20 minutes on the clock, great build-up play involving Tom Hopper saw the ball moved back to Adelakun, who crossed from the right to the back post. Lee Novak met it but headed over the crossbar.

Just a minute later, there was more good play from the Iron as Clarke got down the right wing, sending in a low cross. It was deflected, but kindly for Novak, who hooked goalwards but Cornell saved the effort.

In the 28th minute, Holmes played in Adelakun on the right. He cut past the full-back before firing an effort goalwards, which Cornell beat away for another Iron corner.

United took a deserved lead in the 33rd minute, as Adelakun took the ball under control on the right side of the 18-yard box before unleashing a venomous strike which crashed into the back of the Northampton net. 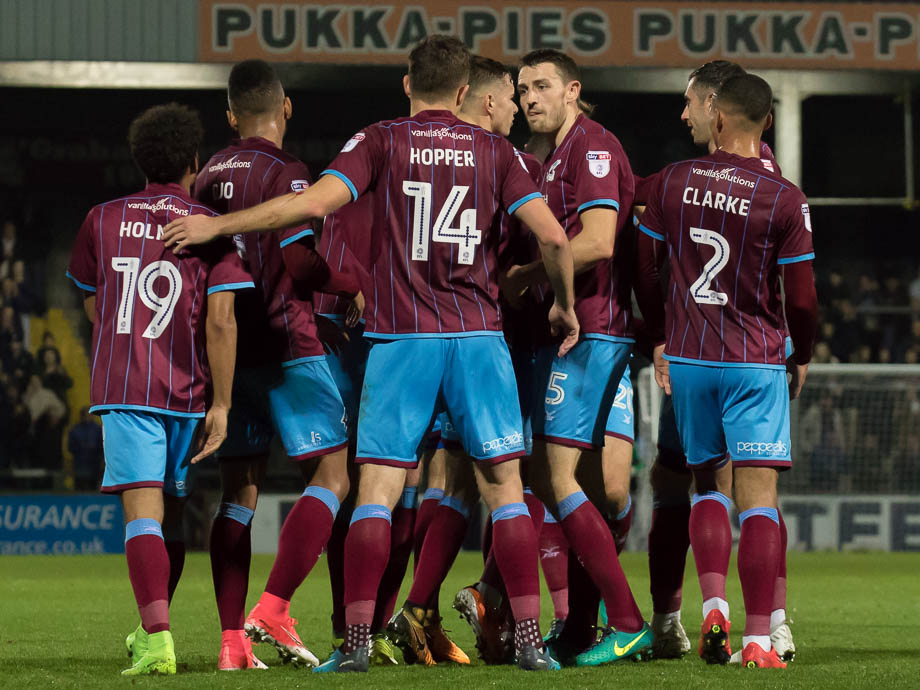 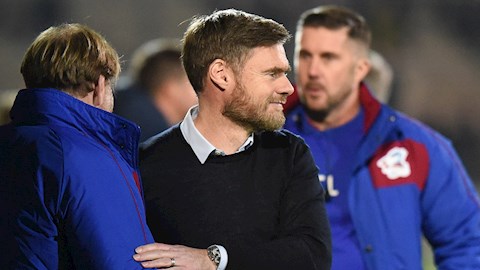 Four minutes later, Holmes brought the ball under control and advanced towards the edge of the area before driving wide.

On 38 minutes, Dean Bowditch hit a half volley towards the corner following a cross from the left, but Gilks got down well to gather and hold.

With 44 minutes on the clock, Funso Ojo drew another great stop from Cornell as the ball dropped to him on the edge of the area and his powerful low drive was tipped wide.

Just before the half-time break, Cameron Burgess met a corner to the Iron with a header, with the ball just wide of the post.

After the interval, Charlie Goode played a great ball to Hopper, who brought the ball down brilliantly before playing in Holmes, whose low powerful effort went narrowly wide of the goal.

The next chance came the way of Burgess on 55 minutes, whose header was superbly clutched to safety by Cornell after Goode had nodded across Adelakun’s floated free-kick.

Holmes had another effort on 62 minutes, as he cut inside and struck a low effort that Cornell saved.

With the score at 1-0, the away side would always have a chance of coming back into the game though and they had an opportunity two minutes later when the ball dropped to Crooks, who struck just wide of goal from the left side of the 18-yard box.

On 70 minutes, there was a chance for the Iron as Hopper did brilliantly to pressure the defence. Play spread to Jordan Clarke, with his low drive touched over the bar by substitute Paddy Madden, who was offside.

Just a minute later, Madden had another chance as he broke the offside trap from 35 yards before firing over.

On 78 minutes, Cobblers substitute Waters drifted across the edge of the Iron penalty area before firing a shot goalwards which Gilks saved comfortably.

In the 83rd minute, there was a chance for the visitors as Crooks was played in on the right. He dinked in a cross and the header from Foley was very well saved by Gilks, diving to his left.

On 85 minutes, Adelakun had another go from range but saw his latest effort charged down by a defender.

After 88 minutes, Madden broke the offside trap following a brilliant ball from Kevin van Veen. The Irishman saw his effort saved for a corner to the Iron, from which nothing came.

There were five minutes of stoppage time, but Scunthorpe held on for victory.