The Iron drew 1-1 at home to Bradford City on the final day of the regular League One season.

United got off to a good start as trickery from Hakeeb Adelakun down the right won them a corner, which Josh Morris took. Rory McArdle connected at the front post but it was cleared away.

With five minutes on the clock, there was a further chance for Scunthorpe and a first shot on target of the afternoon. Novak held up the ball and found some space centrally, feeding the run of McGeehan, who drew Doyle into a fine stop with a low drive.

The eighth minute saw a great move from United, which began in their own half. Ryan Yates was set through the middle following a back heel. Bishop slid in to maintain possession and Morris saw his effort blocked.

On 10 minutes, the Bantams drew Matt Gilks into his first stop of the day with an effort from outside the area from Jordan Gibson. It was comfortably gathered by the Iron ‘keeper though.

Adelakun fired over the bar for the Iron in the 11th minute after neat build-up play involving Yates, McGeehan and Bishop to work the ball to the winger.

Scunthorpe hit the crossbar on 15 minutes when Novak was fouled on the edge of the area, in Morris range. He curled it towards the top corner, Colin Doyle was beaten, but the ball rebounded back into play off the crossbar.

Gibson cued an effort wide of the mark from eight yards out on 18 minutes after a right-winged cross was headed on.

In the 21st minute, Townsend broke free into a shooting position and saw his effort from 20-yards saved by Doyle.

Six minutes later, Shay McCartan shifted the ball onto his right foot from 20-yards and unleasheed a powerful right-footed shot, which Gilks was equal to, diving to his right to hold the ball.

In the 36th minute, Gibson gained control of the ball around the Iron penalty area and edged onto his right foot before angling a shot high and wide of the target. It proved the last chance of note in the opening period.

The first effort of the second half fell to the Iron and Adelakun. Novak drove forward with the ball and had three options, opting for Adelakun on the right, who saw Doyle save his driven effort.

On 50 minutes, the ball was only half-cleared by the Bantams defence to Adelakun, who controlled and dragged an effort across the goal, with Novak looking to pounce.

The visitors took the lead following a right-winged corner on 56 minutes - Kilgallon rising highest to nod Bradford City ahead from a right-wing corner.

United soon levelled again on 60 minutes though as Tom Hopper, who had just come on for McGeehan, won the ball and played it to Novak. The ball was played to Bishop, who played a pass that took a bobble and eventually reached Townsend, who showed persistence and prodded home from close range for his fourth goal of the season.

The away team came close again on 66 minutes, as Wyke’s close range header was easily gathered by Gilks after a right-wing cross. Then, six minutes later, Matty Lund shaped to shoot but his effort missed the target.

In the 73rd minute, Clayton Lewis came on for Adelakun as United made a second alteration.

On 81 minutes, Bradford’s Wyke was close to scoring a thunderbolt as he turned and unleashed a shot which cannoned off the underside of the bar. Gilks then managed to gather.

On 82 minutes, Morris whipped in a brilliant free-kick over on the far side. It was flicked on, and Yates couldn’t quite connect with the ball as it dropped to him. He was also flagged offside.

It proved the last opportunity of note as the score ended 1-1.

Tickets are on sale for our home game versus Bradford City right up until kick-off on Saturday, May 5th (5.30pm kick-off).

Supporters can buy at Early Bird prices until three hours before kick-off online via our ticketing website (www.sufctickets.com). Matchday prices then apply. The deadline for Early Bird tickets in person or over the phone has now passed.

Fans will be able to pay on the gate for Turnstiles 2A and 2B of the Britcon Stand, as can those using Turnstile 4A of the Clugston Stand. Please note, matchday prices apply. 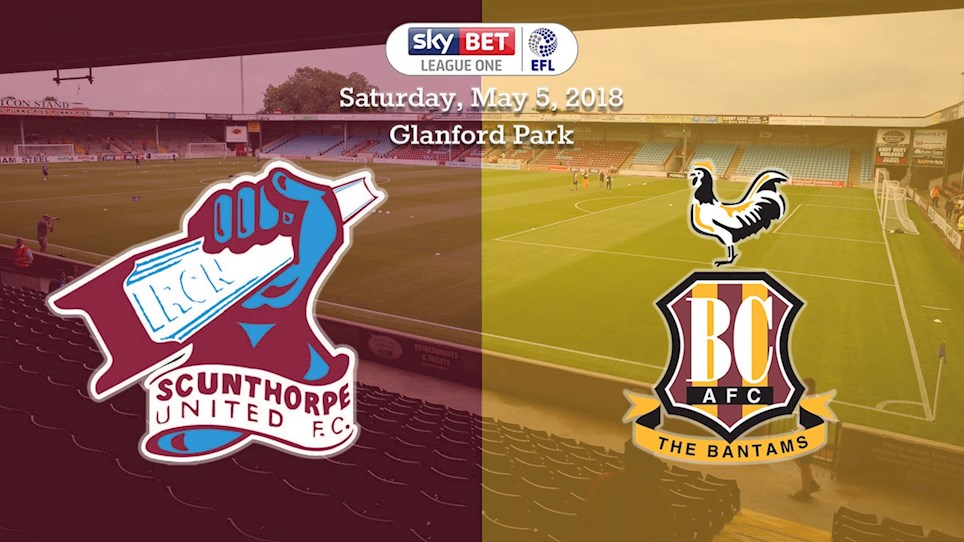 Advance saving! Save by buying your Bradford City tickets in advance

Advance saving! Save by buying your Bradford City tickets in advance