The Iron will be seeking to get off to a good start in their Checkatrade Trophy group on Tuesday night when Sunderland Under-21s visit Glanford Park (7.45pm kick-off). 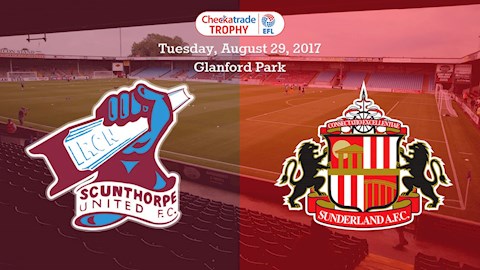 Derby matches against Grimsby Town (home) and Doncaster Rovers (away) follow in October, as United look to build on their decent start to the season in the league.

Confidence was understandably high following the 4-0 away success at Plymouth Argyle on Saturday, and the result pushed Graham Alexander's side into the top six of League One for the first time this season.

TEAM NEWS…
Both Kevin van Veen and Jordan Clarke were on the substitutes' bench on Saturday following their returns from injury, and could well feature - with boss Alexander saying changes will be made ahead of the match to enable some players who haven't been as involved to get game time.

There are no other injury concerns following Saturday's win.

The Iron picked up three points in their opening Checkatrade Trophy group stage by beating Sunderland Under-21s 3-1 at Glanford Park.

It only took Scunthorpe three minutes to take the lead against the Black Cats. James Talbot pulled off a great stop to deny Hakeeb Adelakun, but he didn’t get any direction on his parry, leaving Kevin van Veen to head home the rebound.

The Iron’s second came on the stroke of half-time courtesy of Duane Holmes’ close range finish into the bottom corner, after he controlled Adelakun’s cross.

Halfway through the second-half, Sunderland made it 2-1. Rees Greenwood cut inside before blasting the ball into the top corner and beyond Rory Watson in the Iron goal.

Josh Morris scored the Iron’s third of the night with a simple tap-in from close range.

Manager Graham Alexander made nine changes to his starting eleven from Saturday’s 4-0 win against Plymouth. Rory Watson was handed his debut in goal, along with Jordan Clarke, Cameron Burgess, Charlie Goode, Lewis Butroid in the back four. Sam Mantom, Holmes and Devonte Redmond started in midfield, while van Veen also began the game up front.

The Iron got off to a flying start taking the lead within the first three minutes of the game. Adelakun turned inside, getting away a powerful shot, which was brilliantly saved by James Talbot, but the goalkeeper’s parry fell straight in front of his goal, with van Veen heading home the rebound.

The Iron were immediately on defensive duty after their goal and Watson made a good stop, as he rushed out to close down Lynden Gooch in his box.

Adelakun was involved in another Iron attack in the ninth minute. He got himself into the box and struck a powerful low shot, but Talbot prevented him from scoring at his near post with his foot.

Sunderland’s Gooch again tested Watson in the Iron goal with a low curling effort from the edge of the box, but the goalkeeper got down well and held onto the ball.

It wasn’t long until Watson was called into action again. Luke Molyneux sprayed the ball wide to Greenwood, who cut inside and shot, before it took a looping deflection into the arms of the young goalkeeper.

Shortly after, Talbot in the other net got down low to the right to stop Scunthorpe from doubling their lead. Butroid crossed from the left side to van Veen, who headed low.

The Dutchman again went very close to his second moments later. He turned on the edge of the box, but saw his goalbound effort deflected inches wide going out for a corner kick.

Sunderland then went on the attack with Greenwood. The winger went on a mazy run into the box and shot with the outside of his boot from a tight angle, which Watson got behind, before Burgess poked it out for a corner.

Two minutes before the break and Clarke almost got himself on the scoresheet. He raced to the back post to get on the end of an Adelakun cross, and on the stretch, he volleyed it towards the net, but Talbot was in the right place to save it from close range.

Greenwood again cut in on his right foot for Sunderland and he forced Watson into a straight forward save, with the ‘keeper taking the ball into his chest.

The Iron made it 2-0 in stoppage time of the first half. Similar to his earlier cross, Adelakun whipped the ball to the far post and Holmes controlled the ball, before firing it into the bottom corner with his left foot.

At the beginning of the second half, the Iron were presented with a golden opportunity. A poor Sunderland back pass was intercepted by van Veen, touching it past the goalkeeper and getting around him but with the net unguarded, his strike cannoned off the crossbar and away to safety.

In the 59th minute, Watson made a great save to deny Gooch. Molyneux played a well-weighted pass in behind the Iron defence and his teammate shot with power, but Watson reacted quickly pushing it behind for a corner at his near post.

Sunderland grabbed a goal back in the 66th minute to make it 2-1. Greenwood, who had been causing problems for most of the game, cut onto his left foot and drilled the ball into the top left corner, with Watson unable to get a hand onto the ball.

United could have restored their two goal lead in the 77th minute. A corner wasn’t cleared by Sunderland, which allowed Redmond to shoot, but his effort went over the bar.

Adelakun was next up to fire an effort over the crossbar. He had lots of space on the left wing, as he cut in on his right, curling an attempt goalwards.

Moments later, Hopper so nearly got himself on the scoresheet. Trickery from van Veen allowed Butroid to send a teasing cross into the box, and Hopper, who was unmarked, guided his header over the bar.

In the 89th minute, the Iron made it 3-1 through substitute Morris. Van Veen broke on the left wing before sending a low cross into the box for the winger to tap home.

Tickets are on sale for the Iron’s home Checkatrade Trophy clash against Sunderland. 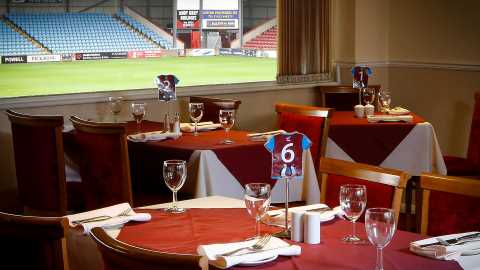 The Black Cats travel to Glanford Park on Tuesday, August 29th, 2017, with the match kicking off at 7.45pm.

It is our first group game of the tournament, with fixtures against Grimsby Town (home) and Doncaster Rovers (away) to follow in October.

Iron fans using Turnstiles 2A and 2B of the Britcon Stand and Turnstile 4A of the Clugston Stand can pay on the gate.