The Iron travel to MK Dons in Sky Bet League One on Saturday (3pm kick-off).

Pay on the gate available at MK Dons

STATE OF PLAY...
United have been boosted by results in recent weeks, having secured 1-0 wins over play-off rivals Charlton Athletic and relegation candidates Walsall.

The most recent game, against the Saddlers, saw Ryan Yates get his second goal in an Iron shirt since joining on-loan in January.

Those results have helped the Iron to regain their play-off position and extend their run of clean sheets.

However, they won’t want to stop there and will be looking to boost their chances of play-off success by getting three points on Saturday.

MK Dons are facing other issues at the bottom end of the table as their future in the division is now out of their hands.

The Dons are now without a manager, as the club parted company with Dan Micciche at the weekend, and began life without him with a 2-0 away defeat at Bradford City in midweek.

The loss, and other results going against them, could have caused them to drop to League Two for the first time since 2008. They, however, mathematically remain in League One, but have to take maximum points from their final games and hope that at least two of Rochdale, Walsall, Oldham Athletic and Northampton lose both of their remaining games. The Dons will also have to hope for a goal difference swing of at least eight strikes.

TEAM NEWS…
The Iron were waiting on Cameron McGeehan, who suffered a knock to his knee during a small-sided game in training on Tuesday. They were hopeful he’d return to training on Friday though.

Elsewhere, Andrew Crofts suffered from illness earlier in the week and has since recovered.

Luke Williams (hamstring) and Jonathan Margetts (knee) remain absent for the clash with the Dons.

ONE TO WATCH…
Chuks Aneke has continued to provide goals and opportunities at the top end of the pitch. The former Arsenal youth striker has achieved 10 assists and 10 goals in this campaign. The 24-year-old seems to have found his feet this season, having already made 15 more appearances and scored six more goals than in his first campaign at the Dons.

United made it three wins and three clean sheets in a row with a 2-0 win at MK Dons on Saturday.

Rory McArdle got off the mark after 20 minutes with a header, before Ivan Toney added to the scoring 15 minutes later with a headed effort that went in off the post as the Iron made it six matches unbeaten.

Scunthorpe named an unchanged side for the game, and early work from the Iron in the opening minute saw Toney knock down a McArdle ball forward following Ryan Yates’ ball. Duane Holmes charged forward and found Hakeeb Adelakun, but the ball ran out for a goal kick.

Then, on two minutes, there was some brilliant defending from the hosts as Toney played a reverse pass into the area for Holmes. He saw the run of Josh Morris in the area, but his square ball was well-defended and then cleared.

With eight minutes on the clock, Adelakun had the game’s first shot. Matt Gilks played to Conor Townsend on the left before a low cross-field ball was dummied by Adelakun to Jordan Clarke. The right-back then fed the winger, who drew the ‘keeper into a save from 20-yards.

Two minutes later, there was a corner to the Iron after another fast-paced move, this time down the left as Morris picked up the ball on halfway. He fed it to Townsend on the overlap, who saw his cross deflected. Nothing came from the set-piece though.

Scunthorpe had to be alert in the 17th minute, with good defending from Murray Wallace as he rose highest to divert an MK Dons free kick out of play for a corner. From the resultant set-piece, Gilks punched away from danger before the Iron cleared.

On 19 minutes, Toney and Morris both forced the Dons backline into a mistake, which saw Morris temporarily through and brought down on the edge of the box. There was a free-kick to the Iron, which Toney took and was goalbound before it took a deflection  from the wall and went out for a corner.

From the subsequent set-play, Scunthorpe went ahead in the 20th minute. McArdle scored his first goal for the club, as he met Adelakun’s corner at the near post and glanced the ball across goal and into the net.

Eight minutes later, United won a free-kick on the edge of the area, which Morris took as he elected to shoot towards the near post. It was saved by the Dons goalkeeper though.

In the 31st minute, there was almost a second for the Iron. It was McArdle’s ball over the top that found Toney, with his first touch taking him into the area. His second saw him attempt to lift over the ‘keeper, but he was foiled.

Three minutes later, the Iron came close to a second as Clarke was denied superbly following Morris’ corner from close range. Toney picked up the ball, lashing an effort goalwards, which was cleared off the line.

United did add to their lead a minute later. Townsend fed the ball forward down the left to Morris, who broke the offside trap and squeezed in a cross. Toney met the ball, heading in off the post to double United’s lead.

As the two minutes of stoppage time were indicated at the end of the first half, Toney latched onto a ball from Holmes before teeing up Yates, who dragged an effort wide.

United had the first chance of the second period on 52 minutes, as they almost took advantage of two errors in the MK Dons defence. Firstly, the final defender missed the ball, with Toney through. Goalkeeper Sietsma came out but then cued his clearance to Holmes, who saw his effort go over the bar.

Four minutes later, there was a penalty shout for the Iron turned down as Morris was played in behind. He looked to have been brought down following a challenge from behind, but nothing was given.

With 63 minutes gone, there was defending from the hosts as Toney turned the ball around the corner for Holmes on halfway before Ojo received the ball. He teed up Townsend but saw his shot blocked.

Moments later, Holmes was denied by Sietsma at his near post after he side-stepped his man before firing an effort towards goal.

The first United change was made on 70 minutes, as Neal Bishop came on for Adelakun, and then it was followed by a second five minutes later as Toney was replaced by Lee Novak.

With a two-goal lead, Scunthorpe comfortably saw the game out during the closing stages. Chuks Aneke got under a header from 10 yards out following a left-winged cross, sending the ball over the top of the bar, with the only chance of note in the closing stages of normal time.

Tom Hopper came on for Morris in the 89th minute, and the hosts tried to get a consolation in stoppage time but Gilks was equal to two Muirhead efforts from distance.

MK Dons have confirmed Iron fans can pay on the gate, with no increase in the price, for this weekend’s away game there. 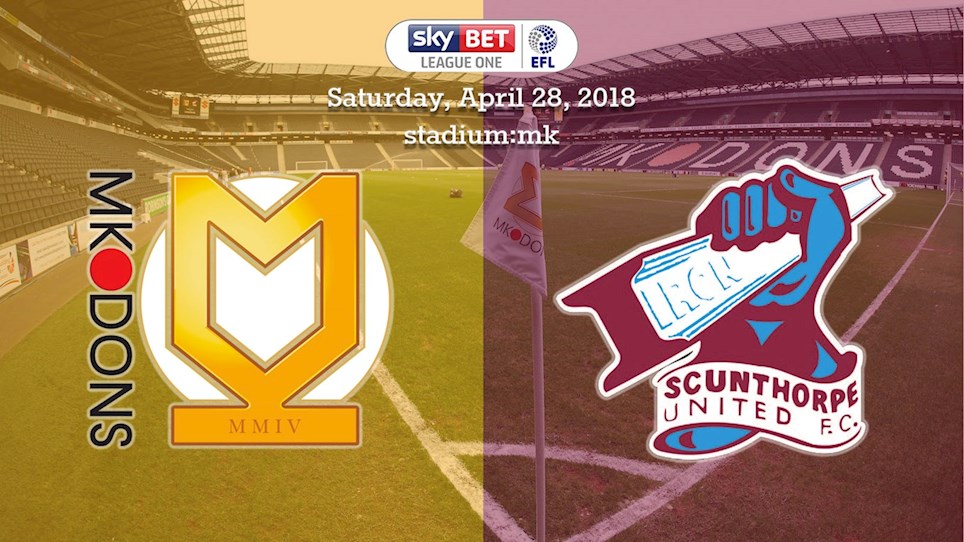 Tickets on sale for trip to MK Dons


Tickets have gone on sale for the Iron’s League One trip to face MK Dons on Saturday, April 28th.