The Iron and Millwall meet for the second leg of their Sky Bet League One play-off semi-final tie at Glanford Park this Sunday.

It’s all to play for after the two sides shared the spoils in a goalless draw in South East London on Thursday night.

Manager Graham Alexander has confirmed that Stephen Dawson's swelling to his hand has gone down but they will assess him ahead of the game.
Scott Wiseman will be missing for the fixture however, after the full-back injured his knee in the win over Swindon Town.
Matt Crooks (knee), Luke Daniels (ribs), Charlie Goode (ankle) and Tom Hopper (shin) will miss the rest of the season.

In Thursday’s reverse fixture, both teams tried, but ultimately couldn’t find that breakthrough in a tight encounter at the Den.
Lee Gregory had the best opportunity for the hosts inside the opening period, as he raced through on goal. However he couldn’t find a way past Joe Anyon, who denied him with a fine reaction save.
United grew into the game after the interval, with efforts from Neal Bishop and Stephen Dawson flying wide.
Josh Morris went closest for Alexander’s men, as he curled a long-range free-kick into the arms of Jordan Archer.

Our full record against Millwall is as follows:

After arriving on loan from Wolverhampton Wanderers in January, Jed Wallace has gone on to establish himself in the Lions’ starting eleven.
Playing in a wide-right berth, Wallace’s presence has been constant, with him featuring 29 times for Neil Harris’ team.

The Iron narrowly missed out on Wembley after being defeated 3-2 by Millwall in their play-off semi-final second leg at Glanford Park.

Ivan Toney hooked United ahead from close range midway through the first-half but two goals from Steve Morison and a Lee Gregory header put the visitors in control and whilst Stephen Dawson did grab a late second for Scunthorpe, that was how things remained.
The tie was goalless following Thursday’s reverse fixture, meaning Millwall go through 3-2 on aggregate after what was a pulsating two legged clash.
Manager Graham Alexander had named the same side that played in the first leg down in London as Dawson was passed fit after recovering from his hand injury.
Millwall started well and had the game’s opening opportunity when a low Aiden O’Brien effort was superbly blocked by David Mirfin, who slid in to complete his well-timed challenge, before Morison fired over in the area.
Toney then hit a teasing cross towards Paddy Madden at the other end, which Jordan Archer initially fumbled but grabbed at the second time of asking.
Lions skipper Tony Craig was next to go close when he powered a firm header at goal, only to find Joe Anyon equal to it, and the United shot stopper had to be alert again soon after when Gregory’s deflected long range strike forced him into further action.
It wasn’t long until Scunthorpe got their noses ahead however as Josh Morris’ corner was slotted home by Toney at the far post with 19 minutes gone, much to the delight of a bumper home crowd.
The visitors responded well to going behind, winning a succession of flag kicks and seeing Byron Webster head just wide, who incidently had to be on his guard back carrying out defensive duties moments later when he blocked Madden’s goal bound drive.
Another couple of Morris set-pieces than caused havoc in the Millwall area as Mirfin narrowly failed to direct his half-volley on target before Archer made a fine stop from Murray Wallace’s header.
That man Morris was really beginning to pull the strings and came within a whisker of netting himself when he latched onto Conor Townsend’s ball down the left and slammed inches past the post.
With the clock ticking down to half-time, Neil Harris’ team then found an equaliser as a deep Craig cross was coolly headed beyond Anyon by Morison, which proved to be the final act of the first period.
Morison again went close following the restart as a centre from Jed Wallace was initially dealt with before the front man smashed just wide.
Minutes after, Millwall took control of the game as first Archer’s long ball forward was superbly controlled by Morison before he teed up Gregory to loop a header into the back of the net and put the visitors ahead.
That was soon followed with a further goal, when the influential Morison drilled home inside the box and put the Lions into a commanding ascendency.
Kevin van Veen replaced Madden as United looked to find a route back into the contest but Millwall continued to threaten and almost bagged again with Jordan Clarke making an important hooked clearance following O’Brien’s lofted attempt.
Scunthorpe then opted for their second switch as Duane Holmes was brought on to inject some pace into the side and it seemed to have an immediate impact.
Goal scorer Toney did superbly to keep the ball under his grasp on the right before finding Morris, who just miscued in the six yard box, whilst the introduction of Craig Davies for Townsend firmly signalled Alexander’s attacking intentions.
The tie trickled into its last ten minutes when United did pull one back as captain Dawson lashed a venomous drive from distance into the bottom corner and it was very much a case of game on.
All the momentum appeared to have swung the Iron’s way as van Veen’s dangerous low centre was deflected inches past the upright but 3-2 was how it remained as Scunthorpe narrowly missed out on the final.
TEAM LINE-UPS
Scunthorpe United: Anyon, Wallace, Mirfin, Dawson, Madden (van Veen, 59), Morris, Bishop, Townsend (Davies, 74), Toney, Ness (Holmes, 65), Clarke.
Substitutes not used: Watson, Toffolo, Mantom, Sutton.
Millwall: Archer, Hutchinson, Craig, Williams, Gregory (Butcher, 80), Romeo, Wallace, Webster, Morison, O'Brien (Ferguson, 69), Abdou.
Substitutes not used: King, Worrall, Thompson, Onyedinma, Cooper.
Attendance: 7,190.
Tweets by @SUFCOfficial

The Iron’s home League One play-off semi-final second leg vs Millwall has been made ALL-TICKET.

The Britcon Stand (terrace) has now sold out. Home fans wishing to be in the SPB or Clugston Stands need to purchase tickets in advance from our ticket office for the game, which takes place on Sunday, 7th May (6.30pm kick-off).
The decision has been made following excellent advance sales, and also on safety grounds.
Supporters who have bought online or over the telephone are urged to collect in advance or early on matchday to save queuing time. Our ticket office opening times can be seen below.
The turnstiles open at 5pm on Sunday (an hour-and-a-half before kick-off) and supporters are urged to arrive early to avoid congestion as we get closer to kick-off. The East Car Park will be open from 3pm and is sold on a first come, first served basis so please arrive early if you are planning on using the stadium car park. The Iron Bar will be open from 3pm on Sunday.
TICKET OFFICE OPENING TIMES
Sunday – 10am to 6.30pm
PRICES
Please note, play-off matches are not included in the 12th Man package and therefore all seats need to be paid for.
As this is a cup fixture, Iron Members are unable to receive a £1 discount off match tickets for the Play-Off clash.
HOW TO BUY
In person: At the Glanford Park ticket office
By phone: Call 01724 747670 during opening hours
Online: Via https://ticketing.scunthorpe-united.co.uk 24/7
Tweets by @SUFCOfficial 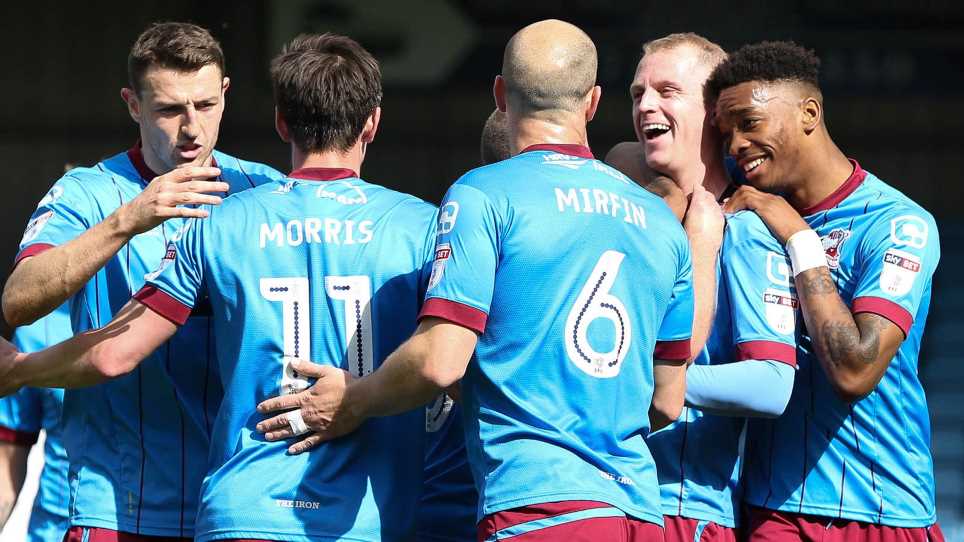 
The Iron will take on Millwall in a Sky Bet League One Play-Off Semi-Final second leg at Glanford Park on Sunday, 7th May (6.30pm kick-off).