First travel to fourth in Sky Bet League One when the Iron take on Bradford City at the Northern Commercials Stadium on Boxing Day.

The Bantams themselves though will be aiming for three points to boost their own promotion push.

Alexander has revealed full-back Conor Townsend will be out of action for at least a month with a groin injury.

Townsend missed last week's game against Millwall with the problem and, following a visit to a specialist, it's been revealed he will be out of action until at least the end of January.

As for David Mirfin, the United boss expects the defender to be back around mid-January, as he steps up his recovery from a foot injury.

Scunthorpe were edged out 1-0 by Saturday’s opponents the last time they met, back in April of this year.

The away side had chances in the opening period, with both Paddy Madden and Hakeeb Adelakun going close.

However, substitute Steven Davies sealed the victory for Bradford, as he finished from close range after being on the field for a matter of moments.


Billy Clarke is the club’s top scorer this season with six goals, all in Sky Bet League One.

The Irishman found the net in his most recent outing, as he struck in a comfortable 4-0 victory over Rochdale. 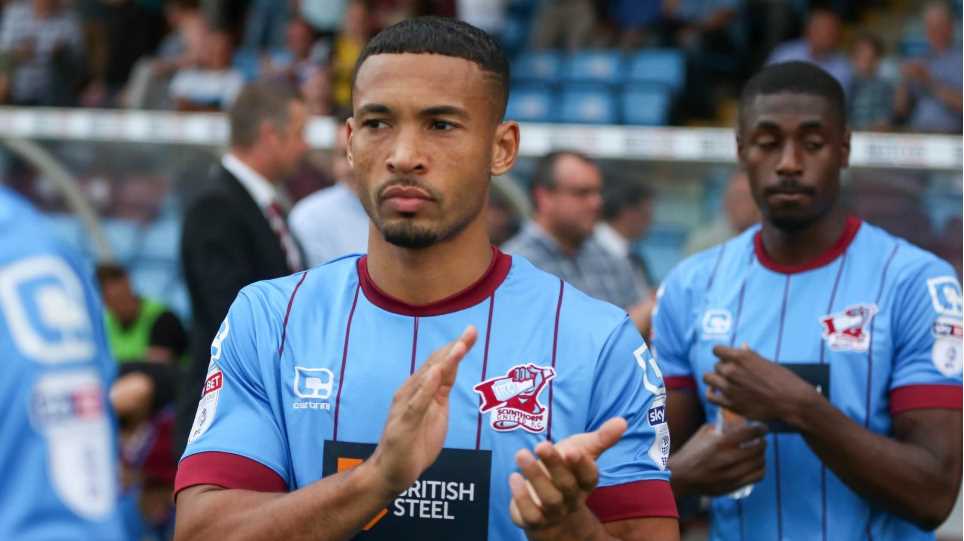 CLARKE AHEAD OF CHRISTMAS FIXTURES


Defender Jordan Clarke feels the Christmas period presents an opportunity for he and his Iron team-mates to really make a statement, heading into the second half of the season.

The Iron had to settle for a point, as they played out a 0-0 draw with Bradford City at the Northern Commercials Stadium.

The hosts had the better of an opening period which saw Luke Daniels pull off an array of excellent stops. From then on though, it was Scunthorpe who created the better opportunities, but they couldn’t quite find the crucial breakthrough which would have secured maximum points.

United went into the game unchanged, as Graham Alexander stuck with the same side which was victorious against Millwall last time out.

Both teams were out of the blocks quickly, but it was the visitors who posed the first question, with Josh Morris sending a dipping drive towards Colin Doyle’s bottom left hand corner. The Irishman was alive to it though, and held onto the winger’s effort.

It was then the turn of Daniels to produce a smart stop of his own, denying Nathaniel Knight-Percival from close range. Comfortable work all in all for the Iron stopper though, as he grabbed hold of the defender’s glancing header.

Bradford’s second effort in quick succession soon followed. This time it was Nicky Law with the attempt. However, once again Daniels reacted well, and clutched the stabbed attempt.

On 20 minutes, Morris looked to have prized the Bantams’ backline wide open as he broke with the ball from a corner. After driving over the half-way line and almost into the opposing penalty area though, he was stopped in his tracks by some clever defensive work.

Scunthorpe had an inspired Daniels to thank once more though, ten minutes prior to the interval. Not for the first time in the match, the ‘keeper showed superb reflexes to, this time, turn away a goal-bound effort from Filipe Morais.

Daniels’ heroics kept the home side at bay, as the two sides walked off level at the break.

Stuart McCall’s men flew out of the traps at the beginning of the second half, and applied the pressure straight away. United’s back four stood up to it well however, with Goode making, what could only be described as a last ditch block, minutes after the restart.

Morris then went close to finding the all important opener. His left-footed free kick from the left was curled exquisitely, and only a sprawling Doyle in the Bantams goal could deny him, as he clawed the ball back off the goal-line.

Another chance came the way of Alexander’s side mid-way through the second period, and it fell to Morris. Paddy Madden’s throughball was initially left by an offside Tom Hopper, leaving Morris to run clean through on goal. The winger just couldn't keep his shot down though, and he fired over the crossbar from around 18 yards out.

United visibly grew in confidence as the half wore on, and they began to create more and more telling moments. Good link-up play from Morris and Harry Toffolo on the left then gave Madden the chance to take aim, but the striker could only flash his effort wide of the post.

The workload for Daniels had tapered off somewhat in the second half, but he had to be alert when Bantams forward James Hanson planted a header into his arms on 77 minutes.

A matter of moments later, a decent opening came the way of the away side, and for Hopper. Madden’s work down the left flank was excellent, and his cross was inches away from being turned home by United’s number 14, who just couldn’t quite steer the ball home.

The frontman had a half-chance in the dying minutes of the game, but his sliced shot proved to be the last action, in an entertaining goalless draw in Yorkshire.

CLARKE AHEAD OF CHRISTMAS FIXTURES


Defender Jordan Clarke feels the Christmas period presents an opportunity for he and his Iron team-mates to really make a statement, heading into the second half of the season.

The Iron travel to Valley Parade on Boxing Day, Monday, December 26, 2016 (3pm kick-off) and have been handed 832 seated tickets for the game, located in the TL Dallas stand.

The Iron travel to Valley Parade on Monday, December 26, 2016 (3pm kick-off) and have been handed 832 seated tickets for the game, located in the TL Dallas Stand.

Please note, United receive 5% of all ticket sales purchased in advance, but receive nothing if they're bought on the day at Valley Parade.
You can purchase tickets in person at the Glanford Park ticket office, by calling 01724 747670 or through visiting ticketing.scunthorpe-united.co.uk.
Prices for the game are as follows:
NOTE: Adult tickets will increase to £25 on matchday, so save £5 on each adult ticket by buying with us in advance. Other categories do not increase on the matchday.
Please also note an under-11 ticket must be purchased at the same time as at least one full paying adult ticket.
The club have been handed six pairs of wheelchair and carer tickets, which are located downstairs in the same stand.
Ambulant disabled supporters are charged as per their age category and must be in receipt of DLA or PIP at the higher level, or middle rate for mobility.
Tickets remain on sale for the fixture until 12noon on Saturday, December 24, 2016.
Click here for away coach travel news ahead of the game, which includes a special BOGOF offer when you purchase both coach travel for this fixture and for our New Year’s Eve trip to Bolton Wanderers.
Tweets by @SUFCTickets